Follow live updates of the 2nd ODI between Australia and South Africa.

(Catch the Live Score and Live Updates of the match here.)

South Africa 157/7 | Overs 27.4
David Miller 22 (27), Dale Steyn 4 (3)
That’s it! South Africa have clinched a superb three-wicket victory! Miller dispatches Coulter-Nile for 12 runs in an over. Hazlewood returns and takes the wicket of Philander, but Proteas needed just 2 runs. Steyn comes in and finishes it with a boundary.
OUT! Philander c Johnson b Hazlewood 0 (1)
South Africa 141/6 | Overs 26
David Miller 10 (21)
De Villiers misses his half-century! Hazlewood provides the dismissal again! South Africa are making tough work of the short target. Credit to Australia for their fighting spirit!
OUT! de Villiers c Wade b Hazlewood 48(41)
South Africa 128/5 | Overs 23
AB de Villiers 48 (36), David Miller 4 (8)
These two batsman haven’t really accelerated, but scored steadily. Just 27 runs required, which should come by very easily. However, cricket is a funny game and anything can happen.
South Africa 113/5 | Overs 20
AB de Villiers 38 (23), David Miller 0 (3)
Oh dear! Are they going to make a mess of this chase? Both du Plessis and Behardien depart in consecutive overs. Josh Hazlewood provided the hosts that magical over.
OUT! du Plessis c Wade b Hazlewood 19(39) / OUT! Behardien c Warner b Hazlewood 0 (1)
South Africa 113/3 | Overs 19
AB de Villiers 38 (23), Faf du Plessis 19 (37)
After Russouw, de Villiers is playing the role of an aggressor. Boundaries are coming thick and fast, and it seems that the Proteas will clinch a huge victory here.
South Africa 82/3 | Overs 15
AB de Villiers 13 (9), Faf du Plessis 14 (26)
And he’s gone! Russouw has to depart. But, he has done some good damage before departing. Australia still have a glimmer of hope. But, South Africa are currently on the safe shoulders of du Plessis and de Villiers. South Africa are already half-way near their total, and they look in a hurry to finish this.
OUT! Rossouw c S Smith b Maxwell 30(25)
South Africa 56/2 | Overs 12
R Rossouw 26 (18), Faf du Plessis 13 (24)
Rilee Russouw has picked up the responsibility of seeing his team through. He is playing comfortably, and hitting some beautiful shots. The current partnership is turning out to be wonderful.
South Africa 22/2 | Overs 7
R Rossouw 1(1), Faf du Plessis 5 (11)
Hashim Amla has been dismissed by Mitchell Johnson here. South Africa have lost two early wickets. Australia have made a good start, and it wouldn’t be unsafe to say that the Perth wicket has got a lot of bowling potential in it.
OUT!!Amla c Wade b Johnson 10(22)
South Africa 6/1 | Overs 3
Hashim Amla 1 (11), Faf du Plessis 0 (0)
First wicket down for Australia! Quinton de Kock departs. Are Australia going to defend this paltry total. Too early to say. Both Amla and du Plessis are responsible batsman and they should just look to protect their wicket here. The required run rate is not an issue.
OUT! De Kock c Watson b Hazlewood 4 (8)

Australia 154 | Overs 41.4
Josh Hazlewood 0 (4)
Marsh gets hit on his crotch by a Dale Steyn delivery! Marsh responds by taking a wicket. Steyn responds again by taking his wicket! It’s all over for Australia. South Africa should chase this with ease.
OUT! Marsh c M Morkel b Steyn 67 (88)

Australia 131/9 | Overs 40
Mitchell Marsh 52 (78), Josh Hazlewood 0 (4)
50 up for Marsh! The crowd finally gets something to cheer about. The knock will most probably be in a losing cause, but it shows his strong character. Coulter-Nile isn’t able to hold on to his wicket, and departs after scoring just two runs.
OUT! Coulter-Nile c du Plessis b Steyn 2 (10)
Australia 131/8 | Overs 37
Mitchell Marsh 46 (71), Nathan Coulter-Nile 1 (3)
Another one bites the dust! Morne Morkel completes his second five-wicket haul. Johnson fails to impress with the bat, and has to go! It doesn’t look like Australia are going to bat out their 50 overs!
OUT! Mitchell Johnson c de Kock b M Morkel 3 (7)
Australia 126/7 | Overs 35
Mitchell Marsh 44 (68), Mitchell Johnson 1 (1)
Oh dear, oh dear! Mathhew Wade is adjudged not out, but de Kock reviews it straighaway and the decision is overturned. Maxwell comes in and is gone too! Australia are in grave trouble here.
OUT! Wade c de Kock b M Morkel 19(29) /OUT! Glenn Maxwell b M Morkel 0 (2)
Australia 121/5 | Overs 33
Mitchell Marsh 42 (64), Matthew Wade 18 (24)
Mitchell Marsh is not too far away from his half-century. A fine knock under pressure from him, and this will definitely strengthen his chances of making it to the World Cup squad for Australia. He needs to bat on for much longer, if Australia are to emerge victorious here.
Australia 108/5 | Overs 30
Mitchell Marsh 36 (51), Matthew Wade 10 (19)
Vernon Philander’s spell is continuing for a while after the dismissal of George Bailey. There’s still 20 overs left in the game, and Australia can still post a fighting total if they bat really well from here onwards.
Australia 93/5 | Overs 26
Mitchell Marsh 31 (43), Matthew Wade 1 (3)
Bailey is gone! The captain perishes! This partnership was just starting to cause some problems for the Proteas and they have bounced back in style. Philander makes the breakthrough.
OUT! Bailey c du Plessis b Philander 25 (45)
Australia 78/4 | Overs 23
Mitchell Marsh 24 (39), George Bailey 18 (34)
Tahir and Behardien are bowling smartly to complete their overs without conceding too many runs. Considering the situation, Bailey and Marsh are looking to play cautiously. Boundaries are hard to come by.
Australia 67/4 | Overs 19
Mitchell Marsh 17 (26), George Bailey 14 (23)
Even though Australia bat deep, these two need to form a long partnership. South Africa shouldn’t look to release pressure. The partnership is now worth 33 runs, and both players look determined and unruffled by pressure.
Australia 54/4 | Overs 15
Mitchell Marsh 9 (16), George Bailey 10 (9)
The current partnership has started off beautifully, and both batsmen are looking in good touch. The first 20 runs have come off just 21 balls.
Australia 36/4 | Overs 12
Mitchell Marsh 1 (2), George Bailey 2 (5)
Oh dear! The Australians are falling apart completely. Morne Morkel takes the wicket of Steven Smith. This is absolutely brilliant from the Proteas! Mitchell Marsh walks in to the middle with a huge responsibility on his shoulders.
OUT! S Smith c Tahir b M Morkel 10(20)
Australia 33/3 | Overs 11
Steven Smith 10 (19), George Bailey 1 (2)
Another one bites the dust! Shane Watson has been dismissed for a paltry score by Farhaan Behardien. The bowling change has worked. This is a crucial breakthrough and the hosts are in serious and deep trouble in this second ODI.
OUT! Watson lbw b Behardien 11(26)
Australia 21/2 | Overs 8
Steven Smith 6 (12), Shane Watson 6 (17)
Philander bowls a maiden to Watson. Steven Smith, who has come in for injured Michael Clarke, hits a beatuiful boundary to dispatch a Steyn delivery outside the fence.
Australia 14/2 | Overs 5
Steven Smith 0 (3), Shane Watson 5 (8)
Shane Watson gets off the mark by hitting Morkel for a boundary. Dale Steyn enters the attack and Aaron Finch welcomes him with a six. Steyn comes back well, and picks his wicket next ball. This is absolutely brilliant from the visitors.
OUT! Aaron Finch c M Morkel b Steyn 8 (14)
Australia 3/1 | Overs 2
Aaron Finch 2 (6), Shane Watson 0 (1)
Gone! That’s the first wicket down for Australia. David Warner edges one straight to Quinton de Kock. South Africa are off to a rollicking start in this ODI. The hosts are under pressure rightaway.
OUT! David Warner c de Kock b M Morkel 0(5)

Hello and welcome to CricketCountry’s coverage of the second One-Day International (ODI) between Australia and South Africa at Perth. Australia are leading this series as they clinched the first ODI on Friday. It was a closely fought game, though the scoreboard may not reflect it. South Africa were in with a good chance for a long time, before the hosts hit back. Such is the rivalry between these two teams, that it is always difficult to pick a winner. I am Sameer Jha and I will take you through this contest.

Australia would be led by George Bailey as Michael Clarke is out injured. This is a big blow for Australia as they pray over Clarke’s fitness with the long summer ahead and the World Cup to follow. Meanwhile, it seems as if Steven Smith would get into the eleven. He was in great form during the tour to the United Arab Emirates and Australia would hope he carries on from there. 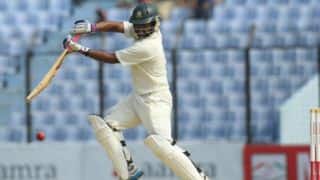