The runners-up team of the 2012 Under-19 World Cup Australia aim to once again seal a final spot.

With the senior sides battling it out in a high-octane Test series, the Under-19s clash in a more quiet setting in Dubai. Australia and South Africa will clash in the second semi-final of the ICC Under-19 World Cup 2014 at the Dubai International Cricket Stadium. Alex Gregory, the Australian captain told the press after their quarter-final victory, “We will focus on our game and let the old boys focus on theirs.” Nevertheless, one would expect the rivalry to spill onto this field as well.

Australia have a strong side with Gregory leading them. Matthew Short and Jaron Morgan formed a good opening stand in the quarter-final and would most probably be persisted with. Jake Doran is a man in good form in the middle and is a mainstay of this line-up.

Aiden Makram leads the South Africans full of confidence. He has been a prime batsman for them in this tournament and was a star of the quarter-final against Afghanistan. Yaseen Valli is their other main batsman for the tournament. Kirwin Christoffels has also been amongst the runs. Thus, three off their top four batsmen are in form and those are good signs for them leading up to this big game. 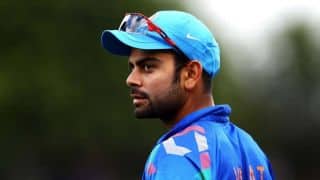