Hello and welcome to CricketCountry’s live cricket blog and live cricket updates post of the fourth One-Day International (ODI) between Australia and South Africa. This is the fourth ODI of the ongoing Tri-Nation ODI series in the West Indies, and it can be said that this is the second leg of the series. Australia and South Africa had earlier clashed in this Tri-Nation Series in a low-scoring encounter, in which the latter had emerged victorious by 47 runs. This game will be played at the Warner Park in Basseterre in St Kitts, and Australia will be looking to bounce back after that disappointing loss. LIVE CRICKET SCORECARD: Australia vs South Africa, Tri-Nations Series, Match 4 at Basseterre

Live cricket score and updates: South Africa 252 | Overs 47.4 | TARGET 289 | BATTING: Kasigo Rabada 3(6): RUN OUT and all over at Warner’s Park! Imran Tahir falls short of the crease, a long wait as the umpire checks it and the big screen shows ‘OUT’ and the Australians celebrate, while the Proteas might have got tired of their tail. Once again they choke. Nevertheless, what a performance from Smith and Co. Adam Zampa, Josh Hazlewood, Mitchell Starc, Smith himself, Warner, Khawaja and even substitute Maxwell made crucial contributions. Overall it was a team effort today from this bunch! OUT! Imran Tahir runout Usman Khawaja/Matthew Wade 6(9)

Live cricket score and updates: South Africa 243/9 | Overs 46 | TARGET 289 | BATTING: Kasigo Rabada 0(2), Imran Tahir 2(2): Adam Zampa and Mitchell Starc have run through the lower order of Proteas in the last couple of overs. In the last 5 overs, South Africa have lost 4 wickets and scored only 22 runs. Zampa bags a third one by dismissing wayne Parnell in the 45th over. Starc’s third wicket is more of Maxwell, who took a brilliant catch at backward point. It was a thick top edge and Maxwell, who has replaced Warner on the field had a perfect jump at a perfect time to complete that catch, leaving South Africa struggling with one wicket to spare. OUT! Wayne Parnell c Mitchell Marsh b Adam Zampa 3(10), Aaron Phangiso c Glenn Maxwell (sub) b Mitchell Starc 3(10)

Live cricket score and updates: South Africa 238/7 | Overs 44 | TARGET 289 | BATTING: Wayne Parnell 3(9), Aaron Phangiso 1(4): OUT! Adam Zampa bags another wicket, thereby covers up for his initial expensive spell. Duminy goes down to slog sweep and is caught by substitute fielder Glenn Maxwell at deep mid-wicket. He was the last recognised batsman in this Proteas’ batting line-up. This is followed by another blow. Starc is brought into the attack in the very right time. He can wash away the left over line-up. he begins with sending back Abbott to the dugout. When Starc unleashes himself, you can only feel sorry for the lower-order. OUT! JP Duminy c Glenn Maxwell b Adam Zampa 41(390, Kyle Abbott b Mitchell Starc 1(3)

Live cricket score and updates: South Africa 222/5 | Overs 41 | TARGET 289 | BATTING: JP Duminy 29(34), Wayne Parnell 1(3): Adam Zampa is picked ahead of Nathan Lyon. 6 overs bowled by the leg spinner, no wicket and has gone over 5 per-over. Zampa with the ball, Behardien on strike, big gamble from Smith and look it worked! Previous game’s Player of the Match is trapped under LBW. He is not convinced, takes DRS. Sadly for South Africa, the replays show the pad was hit first and it was hitting the stumps. Zampa changes tables around here, Behardien has to walk back. OUT! Farhaan Behardien LBW Adam Zampa 4(8)

Live cricket score and updates: South Africa 56/1 | Overs 11 | TARGET 289 | BATTING: Hashim Amla 17(22), Faf du Plessis 14(15): Josh Hazlewood drew first blood with the wicket of Quinton de Kock. Looking at the recent form of the wicketkeeper-batsman, it was a crucial breakthrough made by Josh. That brought in du Plessis who is returning after a long time. He had withdrawn from IPL 2016 mid-way after suffering from an injury. Last 5 overs, 30 runs and a wicket. Nobody’s game so far. Difficult to predict anything at the moment. OUT! Quinton de Kock c James Faulkner b Josh Hazlewood 19(29)

Live cricket score and updates: South Africa 23/0 | Overs 5 | TARGET 289 | BATTING: Quinton de Kock 13(19), Hashim Amla 6(11): Josh Hazlewood and Mitchell Starc opened bowling for Australia. Hazlewood bowled the first over giving 3 runs, while de Kock and Amla as expected struggled against Starc, just 1 run off his first over. In his previous match, he had a wicket to his name in his first over. Unlike West Indies, these two have survived so far playing him.

Live cricket score and updates: Australia 288/6 | Overs 50 | BATTING: Steven Smith 52(49), James Faulkner 1(1): After the dismissal of the top order, it was the skipper himself who took charge of the Australian innings. He had Matthew Wade with him for a while. The wicketkeeper-batsman scored a quick 24 off 10 before becoming Rabada’s only wicket of the day. The wickets were picked by Imran Tahir, Kyle Abbott, Wayne Parnell and Aaron Phangiso.

Live cricket score and updates: Australia 217/3 | Overs 42 | BATTING: Steven Smith 18(29), George Bailey 11(8): Just like Finch, Khawaja goes down to sweep and is caught by Amla. Phangiso makes the crucial breakthrough. Amla is suddenly turning out to be an excellent fielder, after taking an incredible catch to dismiss Warner earlier, this catch was nothing in front of that. Meanwhile, Bailey and Smith are starting to go after the African bowlers. The 42nd over was big for the Aussies. Phangiso was targeted, 13 runs off it. OUT! Usman Khawaja c Hashim Amla b Aaron Phangiso 59(71)

Live cricket score and updates: Australia 188/2 | Overs 37 | BATTING: Usman Khawaja 56(65), Steven Smith 3(7): Wayne Parnell makes a breakthrough. He dismisses the danger man, Warner makes just a couple of more runs after his 6th ODI ton before walking walk to the dugout. The short ball, which Warner was playing quite well so far trapped him. He pulled it which went straight into the palms of Amla at mid-wicket. The dismissal happened in the 35th over, just a run and wicket of it. Six runs came off the next two overs. OUT! David Warner c Hashim Amla b Wayne Parnell 109(120)

Live cricket score and updates: Australia 168/1 | Overs 32 | BATTING: David Warner 100(109), Usman Khawaja 50(58): A single to sweep cover and Warner brings up his SIXTH ODI HUNDRED at Warner Park. His first ton in the ongoing Tri-Nation series. Meanwhile, Khawaja who has been giving him the required support has brought up a FIFTY. These two are doing it for Australia. Proteas seem to have no answer to their game of cricket.

Live cricket score and updates: Australia 78/1 | Overs 16 | BATTING: David Warner 55(59), Usman Khawaja 8(11): The previous match was just an one-off poor show by Warner, he is back to his usual form, a second FIFTY of this Tri-Nations series and overall 16th half-century of his ODI career. What a player, gets better with every game! He has been quite alert of the field placement, no poor shot so far. After 2 dot balls in the 16th over, he picks the backward square leg where there was no fielder, FOUR. DOT. DOT. He ends the over with a single.

Live cricket score and updates: Australia 60/1| Overs 12 | BATTING: David Warner 43(44), Usman Khawaja 2(2): Imram Tahir does the job for his skipper, breaks the opening partnership with Finch’s wicket. Finch goes down while going for a sweep, gets his off stump crashed. The breakthrough was made on the last delivery of the 10th over. Khawaja is the new man in. The danger is not over yet, Warner is still at the crease. He welcomes Tahir with a huge SIX in his next over. Hits the sightscreen. 12 runs added after the first wicket. OUT! Aaron Finch b Imran Tahir 13(28)

Live cricket score and updates: Australia 34/0| Overs 7| BATTING: David Warner 27(26), Aaron Finch 7(16): David Warner and Aaron Finch have managed to get the scoring-rate up for Australia in the last few overs. Warner has continued from where he had left in the IPL and continues to bat with ease. Finch on the other hand has looked more composed and frigidity. There was a big hold up after the fourth over due to faulty side-screen issue which was giving problems for Warner.

Live cricket score and updates: Australia 14/0| Overs 3| BATTING: David Warner 8(8), Aaron Finch 5(11): Brilliant comeback by Abbott in his second over. Everything on the mark to Finch. Abbott sticking to the outside-off stump line, with Finch being only allowed to defend. Kagiso Rabada bowled the second over gave away 6 runs with Finch hitting him for boundary of the second ball free-hit.

Live cricket score and updates: Australia 8/0| Overs 1| BATTING: David Warner 8(6), Aaron Finch 0(0): Kyle Abbott comes into bowl the first over of the match, and Warner welcomes him with a crashing boundary. Fine comeback by Abbott to back to back dot balls. Warner finishes the over with another smashing boundary. George Bailey replaces Glenn Maxwell in the batting line-up while Mitchell Starc comes in for Nathan Coulter-Nile. All-rounder James Faulkner makes his first appearance in the tri-nation series in place of off-spinner Nathan Lyon. Faf du Plessis takes his place in the South African batting line-up in place of the injured Rilee Rossouw, while  Kyle Abbott replaces Tabraiz Shamsi.

The last time when these two sides clashed in the ongoing Tri-Nation Series, South Africa emerged victorious as they won the game by 47 runs. South Africa were restricted to 189 for 9 in their 50 overs with Farhaan Behardien getting a crucial half-century, scoring 62 off 89 balls to lift his side to a respectable total.

In their reply, Australia were as atrocious as their opponents. It was all due to a fine innings of 72 by Aaron Finch that Australia were able to put up any fight against the South Africans. Nathan Lyon scored 30 and Josh Hazlewood managed 11, as no other batsman barring these three could score in double digits.

The first leg of the Tri-Nation ODI series was dominated by spinners, but this round can be expected to be easy for the batsmen. As far as the Points Table is concerned, South Africa are at the top with 5 points in 2 matches, and following them is Australia with similar figures. The hosts West Indies are at the last spot, with 4 points in 2 matches. 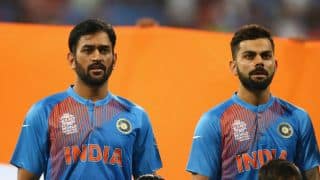