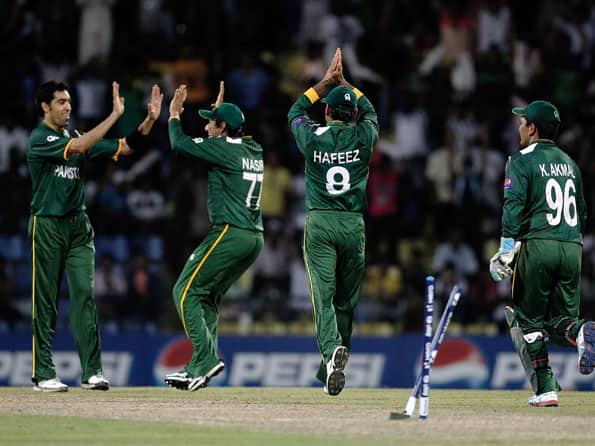 Pakistan and Bangladesh have clashed five times since the inception of the format and the former has always emerged victorious in the slam-bang battles.

Pakistan, the 2009 World T20 champions, are among the favourites to clinch a second title and led inspiringly by opener Mohammad Hafeez, the team looked every bit a genuine contender in its 13-run triumph over New Zealand in the opening group clash.

Bangladesh, on the other hand, were blown away by the Kiwis in their lung-opener and it would be tough for them to regroup easily against another tough opponent.

It was a rare clinical performance by the infamously temperamental Pakistan with the entire top half of batting making decent contributions.

The bowlers were also disciplined with their miserly spells, stifling the Kiwi line-up — Saeed Ajmal being the star with a four-wicket haul.

Led by Hafeez, all the top order batsmen, be it Nasir Jamshed or Imran Nazir, made good contributions. Umar Akmal too was in his element during his cameo but all-rounder Shoaib Malik remains a worry.

Sending him ahead of the aggressive Shahid Afridi against New Zealand didn’t work as Pakistan’s scoring rate suffered and it would be interesting to see how the line-up shapes up Tuesday.

The bowling attack looks just perfect for the conditions with Ajmal, against whom most of international batsmen have so far struggled to get going, being Pakistan’s trump card.

Bangladesh, on the other hand, are out of Super Eight contention but would try to ensure that they go out with heads held high after a disappointing loss to New Zealand.

Most of their batsmen, including the reliable ones like Tamim Iqbal and Shakib Al Hasan, failed to fire in the opening game. The bowlers were also taken to the cleaners by the same Kiwis who just could not take off against Pakistan.

But if Bangladesh manage to produce the surprise act that has disturbed set equations in the past, it would turn out to be an interesting battle between the two sub-continental rivals.

Catch live score and ball-by-ball commentary of the T20 World Cup 2012 match between Bangladesh and Pakistan at Pallekele, here