Catch all the live cricket scores and updates from the third day of 2nd Test between Bangladesh and South Africa.

Hello and welcome to CricketCountry’s coverage of the third day of the second and final Test between Bangladesh and South Africa at Dhaka. This is Nikhil Popat and I will be bringing you the updates from the match. The first Test was marred by rain and more such is expected in the second Test. Bangladesh started the first day well after winning the toss and electing to bat first. They have put up a decent show so far and will wish to add as many runs possible. Rain washed out the entire Day Two and both teams will hope for play to get underway going forward. Will the home side manage to get the total towards 300? Or will South Africa wrap things up soon and dominate with an impressive batting performance? Catch all the updates here. Catch live cricket scores and ball-by-ball commentary of Bangladesh vs South Africa 2015, 2nd Test at Dhaka, Day 3 here

1440 IST: Our worst fears have come true. Play has been abandoned for the second day in a row without a ball being bowled. Let’s hope we get some play at least tomorrow. Until then, take care.

1330 IST: And just when all was looking good, it has started to rain. It looks like a passing shower though. Let’s wait for it to clear. Just as we say, the rain is getting heavier.

It’s so dark the groundstaff need floodlights to see where to put the covers… pic.twitter.com/RLwTfGCyIy

1250 IST: The teams have arrived and are warming up under gloomy skies. No rain at the moment. There will be an inspection in the next ten minutes. Stay tuned for more updates.

1215 IST: The teams have finally left their hotel for the ground.

1120 IST: More goods news as the main cover has been taken off! Hopefully we will be starting soon.

1100 IST: The players take lunch as it has stopped raining at the moment. Fingers crossed!

1011 IST: The rain is back folks and the covers are back in place! Sorry about that!

The hope is over for now…sorry. pic.twitter.com/JGOf3MyqX7

0955 IST: The ground staff are doing their best to the ground ready for play but there is more rain around. Let’s hope we get some play post Lunch at least.

It’s gonna take another couple of hours, and there’s more rain around, but they’re doing their best! pic.twitter.com/HPlxpRRQuP

0915 IST: The rain has stopped for the time being but there is a lot of work to be done. Stay tuned for more updates.

Goodness me…we could be playing in about four hours…if the rain stays away. pic.twitter.com/TXGEw1Usx3

0830 IST: Oh dear, the rains are back and nothing more to describe that than the image posted on Twitter. Let’ hope it clears soon.

Rain washed out entire Day Two of the second and final Test between Bangladesh and South Africa. The home side still have a couple of wickets in hand and will want to get as many more runs as possible with Nasir Hossain still batting.

The visitors on the other hand will wish to wrap things up soon and bat well on this slowish deck. They though will hope for the rains to stop first. 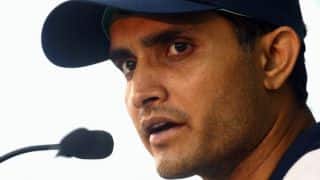 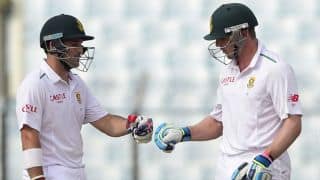