Sri Lanka led Bangladesh by 143 runs at stumps on Day Two of the first Test at Mirpur.

Sri Lanka took complete command over proceedings against hapless Bangladesh at the end of Day Two in the Mirpur by taking a lead of 143 with five wickets in hand. Sri Lanka are at 375 for five in their first innings.

The tepid pace bowlers were treated with utter disdain earlier in the day by Dimuth Karunaratne and Kaushal Silva, who set the tone with a 118 run stand for the first wicket.

Former captain Kumar Sangakkara piled the onslaught on the hosts, who were bereft of ideas and toothless in terms of ability.

After a good showing against Pakistan in United Arab Emirates (UAE) weeks ago, Silva took off from where he left and completed a well deserved maiden hundred. Post Lunch, Bangladesh came back into the game courtesy Shakib Al Hasan’s off spin.

It was debutant medium pacer Al-Amin Hossain who applied the brakes, removing Sangakkara for 75 to break a 155-run stand for the second wicket and Shakib, soon after trapped Siva for 139.

Mahela Jayawardane and Dinesh Chandimal however remained unfazed and with their silky footwork and elegant strokemaking and threatened to pile the misery on the hosts.

Shakib yet again provided his team with a timely strike, removing Chandimal for 42 and nightwatchman Suranga Lakmal departed immediately without troubling the scorers off the bowling of Sohag Gazi to draw the day’s play to a close with the Island nation on 375 for five.

Bangladesh’s late resurgence in the day’s play still leaves them with a fighting chance to salvage something out of this Test. 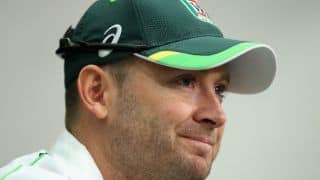