Bangladesh bowled out Sri Lanka for 232 in 49.5 overs in their must-win game in Asia Cup 2012 at Mirpur on Tuesday. 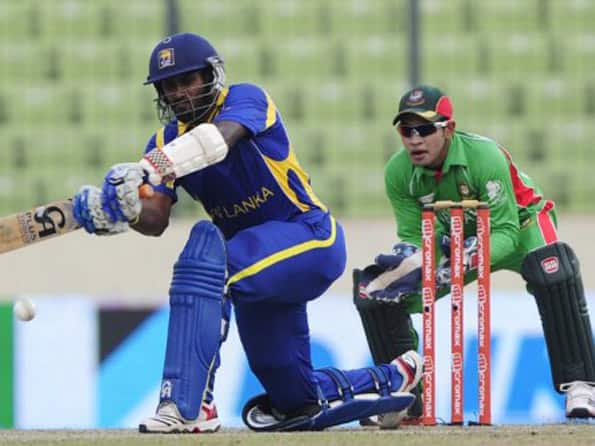 Bangladesh bowled out Sri Lanka for 232 in 49.5 overs in their must-win game in Asia Cup 2012 at Mirpur on Tuesday.

Bangladesh will be chasing a revised target of 212 in 40 overs under Duckworth-Lewis method against Sri Lanka in order to qualify for the Asia Cup final.

The rain delayed the start of the Bangladesh innings after Sri Lanka were all-out for 232 in 49.5 overs.

Earlier, Sri Lanka, after put into bat, got off to a shaky start losing three wickets in the first ten overs.

Pacer Nazmul Hossain did the major damage by the snapping the wicket of Mahela Jayawardene and Tillakaratne Dilshan to have Sri Lanka reeling at 32 for three.

Once Thirimanne departed, Upul Tharanga and Kapugedera added 49 runs to keep the Islanders in the match.

Both, Thirimanne and Tharanga missed out on a well deserved half-century as they tried to up the momentum.

Bangladesh bowlers kept the pressure tight as the Sri Lankan tail made a quick return to dressing room while trying to go for the big shots.

Pacer Nazmul Hossain was the pick of the bowlers for Bangladesh with figures of three for 32 in eight overs.

Kapugedera top scored with for Sri Lanka with a gritty 62.

For Bangladesh it s a must-win match if they have to make it to the finals of the tournament. While if Sri Lanka win will see India through to the finals.