Welcome to CricketCountry's live coverage of the third of the four-match T20I between Bangladesh and Zimbabwe at Khulna.

Nomoshkar, subha aparahna! Hello and Welcome to CricketCountry’s live coverage of the third of the four-match Twenty20 International (T20I) between hosts Bangladesh and visitors Zimbabwe at the Sheikh Abu Naser Stadium in Khulna on Wednesday. I am Paulami Chakraborty and I will be bringing you all the live updates of action from tonight’s game. Bangladesh, who won the opening two ties easily and convincingly, would aim for another stellar and match-winning performance against the depleted Zimbabwe side and win the series, as they aim for a 3-0 lead. However, the visitors aim to strike back and win this tie to stay alive and have a possible chance to square the series. LIVE CRICKET SCORECARD: Bangladesh vs Zimbabwe 2016, 3rd T20I at Khulna

Man of the Match: Malcolm Waller

Live Cricket Score, Bangladesh 144/6 in overs 19, Target 188 | Batting: Mukhtar Ali 14(12), Nurul Hasan 23(14): They aren’t really giving up on the chase. Nurul Hasan scoops Brian Vitori over the wicketkeeper for four. The required rate is way beyond reach, but Bangladesh may try to salvage some pride by scoring 150. Nurul tries to scoop, Vitori follows him outside off, but Nurul ‘reverse-scoops’ him past third-man, good shot, four more! Nurul keeps them coming, slamming Muzarabani through mid-wicket and past extra-cover for consecutive fours! The poor bowler loses direction and bowls a wide. Mukhtar lofts the last ball of the over, straight over long-off for six!

Live Cricket Score, Bangladesh 74/2 in overs 9, Batting: Mosaddek Hossain 3(3), Sabbir Rahman 42(27): And Bangladesh are giving a very good fight back as they chase the huge total. Soumya Sarkar departed making only 24 while Sabbir is still out there inching towards his half century.

Live Cricket Score, Bangladesh 33/1 in overs 4, Batting: Soumya Sarkar 17(12), Sabbir Rahman 13(9): Tendai Chisoro does it for his side as he removes Imrul Kayes. The start is ideal for Zimababwe while Bangladesh have comeback strong. Though the target is huge, the wicket is batting friendly and will serve equally for the hosts as well.

Live Cricket Score, Zimbabwe 141/3 in overs 16, Batting: Malcolm Waller 34(17), Sean Williams 18(18): After Sibanda’s departure, the two at the crease have taken on the responsibility. Boundaries coming in every over. Zimbabwe cruising towards a good total and making things tough for the hosts.

Live Cricket Score, Zimbabwe 72/1 in overs 10, Batting: Vusi Sibanda 38(20), Sean Williams 13(8): And another wicket goes down. Mutumbami is out and Shakib Al Hasan now has 400 international wickets. Quite an achievement for the experienced fellow and a positive for Bangladesh amidst the fireworks in the beginning.

Live Cricket Score, Zimbabwe 72/1 in overs 7, Batting: Vusi Sibanda 38(20), Richmond Mutumbami 13(8): And it’s literally raining in Khulna after rain of boundaries here. Sibanda is hitting every bowler all over the ground. Richmond Mutumbami is in and is providing the support Sibanda wanted. The fireworks will hopefully go on after play resumes.

Live Cricket Score, Zimbabwe 45/1 in overs 4, Batting: Vusi Sibanda 24(10): OUT! H Masakadza c Mosaddek Hossain b Mohammad Shahid 20 (14) After a delayed start, Zimbabwe is going all strong. They seem to be willing to post a big total! Sibanda is going all guns out and Zimbabwe are doing great. Bangladesh have four debutants today in the squad and are experimenting. Losing an important wicket as Hamilton is not good at all but Sibanda is doing it for the team.

TOSS: Zimbabwe won the toss and elected to bat.

Considering the performance in the previous game, Bangladesh had a decent outing with the bat, with a couple of batsmen in the form of Soumya Sarkar and Sabbir Rahman, who scored above 40 and finished on 43 each, while Rahman remained unbeaten on the score. Other batsmen too contributed decently, with three of them scoring above 20. While in the bowling, most of the bowlers contributed decently, with Sabbir Rahman claiming three for 11 in just 2.1 overs. Bangladesh vs Zimbabwe 2016, 3rd T20I at Khulna, Preview

Zimbabwe batsmen, on the other hand, struggled with the bat, with skipper Hamilton Masakadza being the top scorer with a score of 30, while opener Vusi Sibanda and Malcolm Waller scored 21 and 29, respectively. The rest of the batsmen folded up for single figures. In the bowling attack, Zimbabwe had a tough outing once again as three bowlers in the form of Taurai Muzarabani, Wellington Masakadza and Graeme Cremer claimed a wicket each. 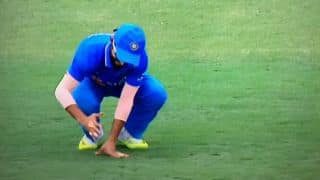