Hello and welcome to CricketCountry’s live cricket blog of the Match 12 of the Caribbean Premier League (CPL) 2016 between Barbados Tridents (BT) and Jamaica Tallawahs (JT) at Kensington Oval, Bridgetown, Barbados. 2015 edition’s runners-up, came back to form after losing their opener with their last match win over St. Kitts and Nevis Patriots. On the other hand, JT, led by Chris Gayle, who has been in his usual best this tournament, have a task in hand to get the better of Keiron Pollard’s team who are getting back to form and that too will be playing at their own den.  JT still have an edge as they are at the second spot in the points table as they have won three and lost only one so far. BT are at fourth spot. Overall, an interesting contest awaits for the fans and spectators as these are two heavyweights who will compete against each other. Read: Hashim Amla, Dwayne Bravo broke 9-year-old record in CPL 2016

So unfortunately the match has been abandoned, thanks to the rains.

LIVE CRICKET SCORE AND UPDATES: JT 116/2 in 10 Overs, BATTING: Chris Gayle 47 (20), Rovman Powell 6 (5): Just when Gayle was at his best, the rain gods have no mercy! Now what, how much is the game going to be reduced. Let’s wait. Hope for the rains to go away soon. Just two more overs were remaining let’s hope the game goes on. Meanwhile, Gayle’s partner Sangakkara could stay longer to support him and was picked right on spot by Ravi Rampaul for 25. New batsman now with Gayle is Rivman Powell.

LIVE CRICKET SCORE AND UPDATES: JT 106/1 in 9 Overs, BATTING: Chris Gayle 47 (20), Kumar Sangakkara 25 (13): JT are going at 16 runs per over. They know it is just 12 overs match and how crucial it is to get the runs on board. already at 85 and this over could take them to 100 runs. David Wiese is the new bowler now and Gayle smashes it off like a fly for SIX. So far 9 runs and two balls to go, let’s see what’s in store now. 100 up for for JT and guess what it is a six. So they have doubled the runs in this over with that beautiful SIX by Gayle who is on fire today.

LIVE CRICKET SCORE AND UPDATES: JT 69/1 in 7 Overs, BATTING: Chris Gayle 28 (15), Kumar Sangakkara 8 (6): Tridents receive their first wicket, Walton was dismissed for 25 and enters Kumar Sangakkara. Gayle and Sangakkara combinations is sizzling enough to keep the scoreboard ticking. From the last over, it was 15 runs already thanks to the huge six and five wides that came complimentary. That brings up the fifty for Jamaica Tallawahs. As for the current over, already seven runs from it and last one to go. Shoaib Malik has provided the much needed breakthrough for Tridents.

LIVE CRICKET SCORE AND UPDATES: JT 34/0 in 4 Overs, BATTING: Chadwick Walton 21 (19), Chris Gayle 11 (5)  Steady start by the Tallahwahs, as both the openers seem to be in splendid and aggressive approach, smashing the ball all mostly, all over the park. Barbados need some wickets here.

The rain has disappeared it seems. The umpires have inspected the field and have decided to go with 12 overs per side, that would include a four-over powerplay.

The news is that it may be a 12-13 overs aside game for both the teams. For now, the boys are warming up from both the camps. We might get a game if there are no further interruptions from rains.

The match is all set to lose overs now. Covers are on the field as drizzle continues. The wait gets longer.

Good news from the center. Covers coming off at Barbados.

Rain interrupts play after toss. Suggested to be a passing shower. Hopefully we will get a game soon.

TOSS UPDATES: Barbados Tridents (BT) have won the toss and will field first

After winning the first two matches, Tallawahs lost their last outing against table toppers, Guyana Amazon Warriors. Barbados lost their tournament opener but came back strong thanks to a well planned chase set up by two of their most experienced campaigners in the middle, AB de Villiers and Shoaib Malik. Rain is not expected to play a major role in this clash and a swing bowlers may get assistance from the Malcolm Marshall end through some cold breeze. Read: Zampa thinks CPL will be great learning curve
If Tallawahs emerge victorious, they will remain at the second spot in the points table, but with a win, Tridents can climb to the second place in the table. 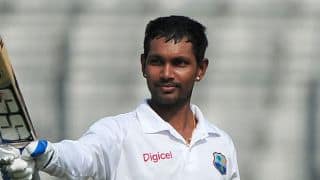 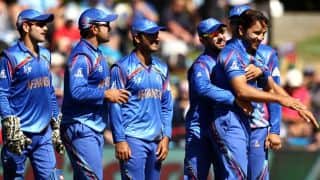