Hello and Welcome to CricketCountry's live coverage of Match 18 of the CPL 2016, between Barbados Tridents and St Lucia Zouks, at Barbados.

Good Evening! Hello and Welcome to CricketCountry’s live coverage of Match 18 of the Caribbean Premier League (CPL) 2016, between Barbados Tridents and St Lucia Zouks, at the Kensington Oval in Bridgetown, Barbados on Sunday. I am Ayush Gupta, and I will be bringing to you the live updates from this tie. Barbados are currently fourth in the table, having played five games, winning couple and losing couple, while one game stands in no result. Whereas St. Lucia are currently at the bottom of the table, having played three games, winning one and losing the remaining couple, as both the teams aim for a win here. LIVE CRICKET STREAMING: Barbados Tridents vs St Lucia Zouks, CPL 2016, Match 18 at Barbados

LIVE CRICKET SCORE AND UPDATES: SLZ 105/6 in 15 Ovs. BATTING: Kyle Mayers 7 (5), Derone Davis 5 (6) — GONE!!!! Couple more down again, as Huseey and Sammy have been dismissed for 17 and 18, respectively, while the present batsmen can still manage to chase it down, provided some big knocks.

LIVE CRICKET SCORE AND UPDATES: SLZ 60/4 in 10 Ovs. BATTING: Michael Hussey 13 (13), Darren Sammy 0 (1) — GONE!!!! Couple of wickets down again, as Fletcher and Miller fall for 20 and 11, respectively, while Hussey and Sammy make sure that they stick on to chase the total down.

LIVE CRICKET SCORE AND UPDATES: SLZ 33/2 in 5 Ovs. BATTING: Andre Fletcher 17 (7), Michael Hussey 0 (2) — GONE!!!! A couple of opening breakthroughs for the Tridents, as they get rid of Johnson Charles and Shane Watson for mere eight and an unfortunate duck, respectively, as the present batsmen make sure that they don’t suffer further setbacks in their pursuit of the chase.

LIVE CRICKET SCORE AND UPDATES: BT 21/0 in 5 Ovs. BATTING: Kyle Hope 10 (15), Shoaib Malik 9 (15) — Steady start by the Tridents as the openers are batting steadily, and are showing no haste, as they aim to save the wickets and energy for the big innings later on as the innings progresses.

Earlier on Saturday, Jamaica Tallawahs registered a win by a big margin of 108 runs against St Kitts and Nevis Patriots. Kumar Sangakkara and Kersick Williams were the stars of the match. Sangakkara scored 65 runs off 47 balls when Jamaica Tallawahs lost both their openers Chadwick Walton and Chris Gayle. Kersick Williams gave a triple blow to St Kitts when he took three wickets in the ninth over, taking the game away from them. St Kitts lost four wickets in a matter of six balls without a run being scored. They never looked positive during their chase of 184 runs as they kept losing wickets at regular intervals and then suffered a major batting collapse to make defeat inescapable for them. 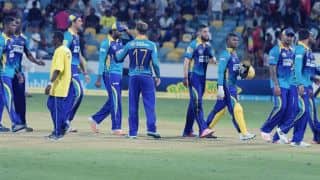