Catch the live cricket scores and updates of Bengal vs Vidarbha, Ranji Trophy 2015-16, Group A match, Day 3 at Kolkata.

Hello and welcome to CricketCountry’s live coverage of Day Three of the Ranji Trophy 2015-16 game between Bengal and Vidarbha at the Jadavpur University second campus ground in Kolkata. Of the four games Bengal have played so far this season, they have drawn all of four them. At present, Bengal are fifth in the group table, and they would desperately want to grab six points with their first win at home. On the other hand, Vidarbha, have had a decent season winning and losing two of their five games and drawing one. They are currently at the second spot in the table, behind Delhi. Their experienced pro Wasim Jaffer just became the first batsman in history to score 10,000 Ranji Trophy runs. READ: Wasim Jaffer becomes first batsman to score 10,000 runs in Ranji Trophy

LIVE CRICKET SCORE: BEN 115/6; BATTING: Manoj Tiwary 33 (74), Veerpratap Singh 6 (24) — GONE!!!! Pankaj Kumar Shaw is the latest man to be dismissed in the Bengal innings as Veerpratap Singh makes his way in while Bengal earn a lead of just around 250 runs.

LIVE CRICKET SCORE: BEN 79/5; BATTING: Manoj Tiwary 6 (16), Pankaj Kumar Shaw 4 (4) — OOPPSS!!!! This seems to be a mega collpase for BEngal as with no wickets down, all of a sudden they have half of their team back to the pavilion. It seems a slender lead here could lead to their defeat as well. Game on, folks.

LIVE CRICKET SCORE: BEN 36/0; BATTING: AR Eswaran 22 (37), Sayan Shekhar Mandal 13 (36) — LUNCH!!!! Bengal continue their quest for the second inningfs steadily with no major upsets so far and continue to maintain the lead as they look to wxtwnd it towards a bigger one.

LIVE CRICKET SCORE: BEN 24/0; BATTING: AR Eswaran 19 (26), Sayan Shekhar Mandal 4 (23) — Vidarbha have been shot out for 202 while bengal move into the second innings with a lead of 132 as they currently bat with a fair lead and would aim to extend it more before a declaration.

LIVE CRICKET SCORE: VID 200/9; BATTING: SB Wagh 58 (94), RD Thakur 8 (16) — Vidarbha have more or less come close to the end of their first innings and will most likely fail to take the first innings lead. However, Bengal would be happy to go into the second innings with a lead and would hope to fully utilise it.

Bengal have grossly under-performed, with the likes of Manoj Tiwary, AR Eswaran, Sudip Chatterjee, Sayan Mandal, Shreevats Goswami, Ashok Dinda, Pragyan Ojha, and Veerpratap Singh in the side. Chatterjee has been good, but the others have not quite lived up to their billing yet. As for Vidarbha, they are missing pace spearhead Umesh Yadav who is away on national duty playing the Test series against South Africa. Without him the bowling lacks a bit of bite. 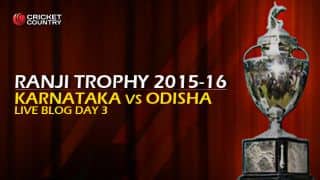 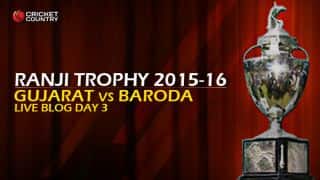