Welcome to CricketCountry’s live coverage of Match 12 of the 2015-16 BBL between Brisbane Heat and Hobart Hurricanes in Brisbane.

Good Evening! Hello and Welcome to CricketCountry’s live coverage of Match 12 of the 2015-16 Big Bash League (BBL) between Brisbane Heat and Hobart Hurricanes at The Gabba in Brisbane on Monday. This is Ayush Gupta, and I will be bringing you the live updates of all the action from this exciting encounter. Brisbane, who are currently placed at the bottom of the table have played three games and have lost all of them as they look to earn their opening win of the season. While Hobart, who are just a place above Heat on seventh have just a couple of points from same amount of games, thus winning and losing a game each. Both the teams aim for a win here.

LIVE CRICKET SCORE: Brisbane Heat 179/9 in 20 Overs | Target 195 | BATTING: Samuel Badree 1(3), Josh Lalor 5(4): Chris Lynn advances down the track and executes a slog shot only to edge it back to the wicketkeeper. Brisbane Heat then suffer a lower-order batting collapse and are able to reach only 179 for nine in 20 overs. Hobart Hurricanes take a 15-run victory. OUT! Chris Lynn c Tim Paine b Cameron Boyce 101(51), OUT! Jason Floros b Jake Reed 15(18), OUT! Ben Cutting c Christian b Reed 13(7), OUT! Luke Feldman run-out Jake Reed 0(0), OUT! Mark Steketee run-out Daniel Christian & Jake Reed 0(0)

LIVE CRICKET SCORE: Brisbane Heat 153/4 in 16.4 Overs | Target 195 | BATTING: Chris Lynn 101(50), Jason Floros 9(12): Chris Lynn is on fire. He is batting on 102 having faced only 50 deliveries. Nathan Reardon got out for four runs on Cameron Boyce’s bowling. Jason Floros has come to the middle after the departure of Reardon. Brisbane Heat now needs 42 runs from 20 balls. Match has turned out to be a thrilling contest and any team can emerge victorious as of now. OUT! Nathan Reardon c Clive Rose b Cameron Boyce 4(8)

LIVE CRICKET SCORE: Brisbane Heat 110/3 in 11.2 Overs | Target 195 | BATTING: Chris Lynn 70(33), Nathan Reardon 3(5): Sam Heazlett departs for 21. Chris Lynn is playing one of the finest innings of BBL 2015-16. Having faced just 33 balls he has already reached 70. He has struck five boundaries and four sixes in his innings so far. Nathan Reardon is the new man at the crease. Brisbane Heat now requires 85 runs from 52 deliveries. They have seven wickets remaining. OUT! Sam Heazlett c Tim Paine b Darren Sammy 21(16)

LIVE CRICKET SCORE: Brisbane Heat 65/2 in 6.4 Overs | Target 195 | BATTING: Chris Lynn 34(18), Sam Heazlett 21(16): Brisbane Heat are off to a quick start but they have also lost two wickets. First to go was Lendl Simmons for a duck and then Jimmy Pierson. Chris Lynn is batting on 34 from just 18 balls. Sam Heazlett is batting at the other end on 21 off only 16 deliveries. Brisbane Heat now requires 130 runs from 80 deliveries with eight wickets in hand. OUT! Jimmy Peirson c Clive Rose b Jake Reed 1(3), OUT! Lyndl Simmons b Shaun Tait 0(3)

LIVE CRICKET SCORE: Hobart Hurricanes 194/4 in 20 Overs; BATTING: Daniel Christian 56(24), Darren Sammy 7(14): Daniel Christian’s blitzkrieg helps Hobart Hurricanes reach 194 for four in their allotted 20 overs. He scored 56 off 24 balls at a strike rate of 233.33 remaining unbeaten till the end. It is a good score and shall be interesting to see if Brisbane Heat succeed to chase it down or not.

LIVE CRICKET SCORE: Hobart Hurricanes 170/4 in 18.2 Overs; BATTING: Daniel Christian 38(18), Darren Sammy 4(8): George Bailey departs after a quick 31-run knock. Daniel Christian is approaching his half century. He is batting at a strike rate of above 200. Darren Sammy is new man in the middle. OUT! George Bailey c Luke Feldman b Mark Steketee 31(21)

LIVE CRICKET SCORE: Hobart Hurricanes 116/3 in 13 Overs; BATTING: George Bailey 23(15), Daniel Christian 0(0): Kumar Sangakkara departs after a brisk 32 off 19 balls which included a four and two sixes. He hit one six off Steketee and the other on Badree’s bowling. Daniel Christian has replaced Sangakkara. Daniel is yet to face a ball. George Bailey is batting on 23 with the help of two shots to the fence. OUT! Kumar Sangakkara b Luke Feldman 32(19)

LIVE CRICKET SCORE: Hobart Hurricanes 45/0 in 5 Overs; BATTING: Tim Paine 18(12), Ben Dunk 23(18): Dunk joins the party welcoming Mark Stekette with a six. He follows it up with a boundary on the last ball. Paine than hits the first ball of the fifth over, bowled by Feldman for a four. He picks a single two balls hence giving Dunk the strike who smashes a boundary towards the covers.

LIVE CRICKET SCORE: Hobart Hurricanes 23/0 in 2.4 Overs; BATTING: Tim Paine 13(7), Ben Dunk 6(9): Right-arm pacer Luke Feldman is handed the ball. He too is taken for nine runs in his first over itself which included a boundary by Paine on the last ball off a short delivery outside the off stump. Paine pulls it with all his strength and carts it towards the midwicket. A few singles and a couple follow in the first four balls of the third over. Hurricanes are now 23 for no loss after 2.4 overs.

LIVE CRICKET SCORE: Hobart Hurricanes 9/0 in 1 Over; BATTING: Tim Paine 6(3), Ben Dunk 2(3): Left-arm pace bowler Josh Lalor bowls the first over. He bowls a wide, the very first ball. Ben Dunk then picks a single on a delivery that rose high towards his chest by caressing the ball towards the on side. Two more singles follow with a dot ball in the middle, after which Tim Paine strikes a lose delivery outside off towards the cover region for a boundary. He takes a single next delivery, will keep the strike.

Hurricanes, who won their previous game to this very team by 20 runs would aim to repeat the same winning performance in this away tie and pile on more misery on Heat, who are still searching for their opening win of the season. While Heat, who lost their previous game to Scorchers would aim for payback against Hurruicanes in this home tie and prove that they are indeed a big force in the BBL. 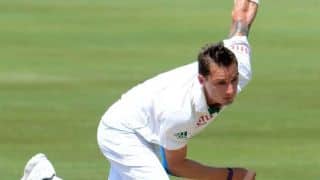