Welcome to CricketCountry's live coverage of match 7 of the 2015-16 BBL between Hobart Hurricanes and Brisbane Heat in Hobart.

Good Evening! Hello and Welcome to CricketCountry’s live coverage of match 7 of the 2015-16 Big Bash League (BBL) between Hobart Hurricanes and Brisbane Heat at the Bellerive Oval in Hobart on Tueasday, as we bring you the live updates of the game. Hurricanes, who have been a powerful force in the tournament have not managed to make it to the final so far. However, they have been good in the semis. Brisbane, on the other hand, too have been in a similar situation, failing to make it to the final, however, they possess a good amount of manpower and superstars to make it happen this season.

Live Cricket Score Brisbane Heat 140/5 | Overs 17 | Batting: Nathan Reardon 37(28), Ben Cutting 7(7): The game is for Hurricanes to lose from here. Reardon is trying to keep it alive but 45 off three overs to big an ask one would think. However, the nature of T20 suggests that Heat can still make a comeback, they need one very good over from here.

Live Cricket Score Brisbane Heat 112/5 | Overs 14 | Batting: Nathan Reardon 16(17): Just when it looked like Heat were getting on top they have received a major setback with the fall of Floros’ wicket.  He’s gone for a 23-ball 42 and that will dent Heat’s momentum in this chase. Boyce made the breakthrough. OUT! Jason Floros 43(23) c Rainbird b Boyce

Live Cricket Score Brisbane Heat 45/1 | Overs 5 | Batting: Lendl Simmons 13(10), Jason Floros 1(1): Rainbird has his revenge. James Peirson was taking on everything and has finally miscued one. He’s fallen for a 19-ball 29. Brisbane Heat has scored 45 runs in five overs largely thanks to Peirson’s innings. They have a good start and if they have another partnership here, it could be troublesome for the home side. OUT! Jimmy Peirson 29(19) c Christian b Rainbird

Live Cricket Score Brisbane Heat 26/0 | Overs 2 | Batting: Jimmy Peirson 24(11), Lendl Simmons 0(1): Shaun Tait did not bowl particularly good lines and lengths in the first ever but his express pace meant the batsmen could not make most of it. However there was no such problem against Rainbird and Peirson cashed in with three consecutive fours to start with. He followed that up with a six of the next ball. Finally there was an improvement in area the fifth ball and only one run was conceded. He hit the same area next ball and got a dot, 19 runs of that over anyway.

Live Cricket Score Hobart Hurricanes 185/3 | Overs 20 | Batting: Tim Paine 87(58), Dan Christian 5(4): It’s a good finish for the home team Hobart Hurricanes and their captain has been at the helm of it all. Cutting did not do too badly getting a few yorkers following batsmen down leg. He had a bit of luck as he got a full toss in that Paine got only for a single. Ultimately 13 runs came of the over with a six and a couple of urgent twos.

Live Cricket Score Hobart Hurricanes 171/3 | Overs 19 | Batting: Tim Paine 79(55), Dan Christian 0(1): Paine has covered for the loss of Bailey in the 19th over by Fakete.  He smashed a big six over midwicket and followed it up with a four. The pressure showed on Fakete as he bowled a wide down leg. OUT! George Bailey 40(21) c Simmons b Fakete

Live Cricket Score Hobart Hurricanes 158/2 | Overs 18 | Batting: Tim Paine 68(51), George Bailey 40(20): The Hurricanes will be very happy with how they have gone in this last couple of overs. Bailey is catching the pace variations very well and Paine is starting to kick on again. Samuel Badree was taken for 16 runs in the 17th over. Hurricanes will be targetting a score of about 180-190 by end of the innings.

Live Cricket Score Hobart Hurricanes 135/2 | Overs 16 | Batting: Tim Paine 56(44), George Bailey 29(15): Runs have dried up a wee bit for Paine after the dismissal of Sangakkara, perhaps it has disturbed his momentum. Bailey has hit a few nice boundaries but needs to take the mantle from here and has to try to bat through the innings. Hurricanes need to target a score of about 170 after the start they have had. Change of pace has been employed by the bowlers extensively, but Bailey is picking it. He hit three fours in the 16th over in a row.

Live Cricket Score Hobart Hurricanes 100/2 | Overs 12 | Batting: Tim Paine 50(34), George Bailey 0(1): Both Sangakkara and Paine have treated their home crowd to some amazing batting. Unfortunately for them Sangakkara has been dismissed for 43 when he attempted a ramp-pull shot and found the man at deep fine leg off Cutting’s bowling. Meanwhile, Paine has got to the 50-run mark and is now joined by Bailey at the crease. OUT! Kumar Sangakkara 43(31) c Simmons b Cutting

Live Cricket Score Hobart Hurricanes 40/1 | Overs 5 | Batting: Tim Paine 30(16), Kumar Sangakkara 5(7): A fantastic bit of fielding by Peter Forrest at mid on saw the dismissal of Ben Dunk run out in attempt to steal a quick single. Kumar Sangakkara is the new man in. But not all news is bad for the Hurricanes. Paine the skipper seems to have found his groove and has already smashed two sixes after a slightly watchful, defensive start. One of those sixes of a pull shot from a Fekete short ball had the umpire come out with a new set of balls. OUT! Ben Dunk 5(7) run out Forrest

Live Cricket Score Hobart Hurricanes 9/0 | Overs 2 | Batting: Ben Dunk 4(5), Tim Paine 5(7): A good opening over by Josh Lalor, he hit the deck hard and bowled a tight line. Got some nip off the surface and conceded just four runs. Off-spinner Jason Floros took the ball next over. Paine and Dunk used their feet against him and peeled off some quick singles. Even he conceded just five runs in the end. Batsmen just trying to get a steady start.

TOSS: Hobart Hurricanes have won the toss and will bat first

Both the teams lost their previous games and would be on a mission to make a turnaround in this tie, as the Hurricanes lost to the Sydney Sixers, while the Heat lost to Melbourne Renegades. And with the stakes on high, the tie promises to be an interesting and a thriller, as both the teams embark on a journey to win this tie, with only one of the two emerging victorious. 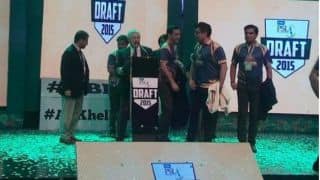