Welcome to CricketCountry's live coverage of the match 9 of the 2015-16 BBL, between Perth Scorchers and Brisbane Heat in Perth.

Good Afternoon! Hello and Welcome to CricketCountry’s live coverage of the match 9 of the 2015-16 Big Bash League (BBL), between Perth Scorchers and Brisbane Heat, at the WACA Stadium in Perth on Saturday. I am Ayush Gupta, and I will be bringing you all the live updates from the action. Perth, who won the tournament a couple of years back have been a major force in the oturnament and would love to repeat the heroics from the same year. However, Brisbane, who too have been the powerhouse of the tournament, have failed to win the tournament so far, but could be the front-runners this time.

Live Cricket Score Perth Scorchers 84/1 | Overs 10 | Batting: Michael Klinger 26 (26), Ashton Agar 13 (12): No harm done as the Scorchers make sure that they chase the target down comfortably without losing further wickets, and it’s just a matter of time before they chase it down.

.@HeatBBL lose another one as Cutting departs. The visitors are now 6-109 in the 19th at #TheFurnace. #BBL05 pic.twitter.com/i1GAuW17W2

That’s how @AJ191 responds to a dropped catch that goes for 4 – #MadeTough #BBL05 pic.twitter.com/A5ENm1sK3q

Live Cricket Score Brisbane Heat 96/5 | Overs 16 | Batting: Chris Lynn 61 (45), Ben Cutting 2 (6): GONE!!!! another one, in the form of Jason Floros, who falls for mere five to Jason Behrendorff as Ben Cutting makes his way in. How much is on store for Heat from here on?

What about that shot from Chris Lynn?! LIVE: https://t.co/doUWSM7kmK #BBL05 pic.twitter.com/LK3XBsWyD4

Hoggy being a good citizen!! Don’t you just love him? #MADETOUGH pic.twitter.com/pF1U3ZdJPa

Live Cricket Score Brisbane Heat 10/1 | Overs 2 | Batting: Chris Lynn 5(7), Jimmy Peirson 4(4): Lendl Simmons is caught on the second ball of the match. The ball delivered by Behrendorff was going away from the batter but Simmons edges it down to the keeper. After two overs Brisbane Heat are 10 for the loss of one wicket. OUT! Lendl Simmons c Bancroft b Behrendorff 0(1)

Scorchers, who have played only a game so far, have lost it to the adelaide Strikers by four wickets, as they look to make a turnaround in this tie, while the Heat, who have played a couple of games so far, have lost both the games and are in a desperate attempt to earn their opening win of the tournament, as they lost their previous game to the Hobart Hurricanes by 20 runs. With a star-studded side and both being the powerhouse of the tournament, it is expected to be one heck of a tie. 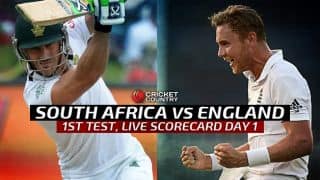 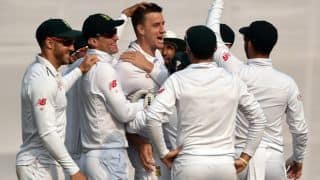