Adelaide Strikers are favourites over Sydney Thunder due to them winning seven out of their eight group games.

Hello and welcome to CricketCountry’s live coverage of the first semi-final of the ongoing Big Bash League (BBL) 2015-16 between the Adelaide Strikers and Sydney Thunder at the Adelaide Oval on Thursday. The Strikers have been the most consistent side in the ongoing tournament so far, having won seven out of their eight matches so far, and will look to storm into the final against the Michal Hussey-led Sydney Thunder, which had finished on the second-last spot in last year’s tournament and will look to make up for the disappointment then by going a step further into the final of the fifth edition of Australia’s premier Twenty20 tournament.

THUNDER WIN! What a day for the club, both teams into the #BBLFinal! That is for every member of the #ThunderNation Bring on Sunday!

It’s a bitterly disappointing way to end #BBL05 for us, in front of our amazing fans. But that’s T20 and we weren’t good enough tonight

Man of the Match: Usman Khawaja

Reminiscing about the time Usman Khawaja was considered too much of a classical stroke player to make it in T20. #BBL05 — Melinda Farrell (@melindafarrell) January 21, 2016

LIVE CRICKET SCORE: Sydney Thunder 160/2 in 17.4 overs; BATTING: Usman Khawaja 104(59), Henry Nicholls 35(27): SIX! Usman Khawaja completes his century in just 55 deliveries, smashing Laughlin over deep square-leg to reach the milestone for a second time in this tournament! What a brilliant form Khawaja is in at the moment, and deserves to be picked into the Australian squad for the ICC World T20! Meanwhile, Sydney Thunder are a couple of hits away from confirming a berth in the final now! SIX! Nicholls looks to end things himself, smashing Rashid over midwicket! Single! Nicholls hands the strike over to Khawaja, who ultimately gets the winning single as Sydney Thunder hammer Adelaide Strikers by eight wickets to storm into the final!

LIVE CRICKET SCORE: Sydney Thunder 137/2 in 15 overs; BATTING: Usman Khawaja 92(50), Henry Nicholls 24(20): FOUR! Khawaja launches Neser over midwicket with absolute ease, as the run-chase is getting easier for Thunder with each passing delivery! QUiet 14th over by Holland, who concedes only four runs in the form of singles in the over. FOUR! Khawaja pulls the short delivery along the leg-stump towards fine-leg for a boundary! SIX! Smashed by Nicholls over deep square-leg. FOUR! The Kiwi is getting into the act now! Goes for a paddle sweep, with the ball flying high over the wicketkeeper, landing just before the long-leg boundary! Meanwhile, Khawaja is eight runs away from a century! Thunder need 23 to win from 30 balls! LIVE CRICKET SCORE: Sydney Thunder 109/2 in 12 overs; BATTING: Usman Khawaja 80(41), Henry Nicholls 8(11): Tight 10th over bowled by Gary Putland, conceding only three off it. Meanwhile, Khawaja cuts Rashid through point for his 11th boundary of the innings. Superb running displayed by Khawaja and Nicholls later in the over, as the 100 comes up for Thunder in the 11th over! Khawaja moves to 80 at the end of the 12th over, and is looking set for a century now! 51 needed off the last 48 balls!

LIVE CRICKET SCORE: Sydney Thunder 88/2 in 9 overs; BATTING: Usman Khawaja 67(33), Michael Hussey 1(1): SIX! Khawaja sweeps Head over deep square-leg, before cutting the fifth delivery towards point! The southpaw has moved to 65 off just 31 deliveries, with Michael Hussey batting on a run-a-ball 10 at the other end! OUT! Adil Rashid, who was the leading wicket-taker of the tournament before Clint McKay took over, gets rid of skipper Hussey, who gets a faint edge to the wicketkeeper Ludeman while attempting a reverse sweep. Black Caps batsman Henry Nicholls walks out to bat now. OUT! Michael Hussey c Tim Ludeman b Adil Rashid 11(3)

You have the highest wicket taker in #BBL05 in your side – and you bowl Travis Head before him….. — Innocent Bystander (@InnoBystander) January 21, 2016

LIVE CRICKET SCORE: Sydney Thunder 64/1 in 6 overs; BATTING: Usman Khawaja 51(25), Michael Hussey 4(4): Khawaja is making the chase look too easy at the moment! Launches Neser over midwicket for a massive six, before hitting three consecutive boundaries off the next three balls to move to 48 in just 22 deliveries, with nine fours and a six! Meanwhile, Khawaja’s onslaught helps complete the 50-run opening stand for Sydney Thunder in the fourth over! FOUR! Watson now into the act, cuts the short, wide delivery outside off through point for a four! OUT! Adelaide draw first blood, although the main danger-man in Khawaja is still present. Jake Lehmann takes the catch off Laughlin’s bowling, as Watson departs for 7 off 8 deliveries. Meanwhile, Watson’s dismissal brings skipper Michael Hussey to the crease! FIFTY for Khawaja, who takes 24 deliveries to reach the milestone! OUT! Shane Watson c Jake Lehmann b Ben Laughlin 7(8)

SIX: Khawaja puts Head in the stands, then sends him to the rope. Thunder 1-83 LIVE: https://t.co/ZrqaGwjxbJ #BBL05 pic.twitter.com/SEcrYPHB7y

LIVE CRICKET SCORE: Adelaide Strikers 159/7 in 20 overs; BATTING: Adil Rashid 14(3), Ben Laughlin 1(1): FOUR! Michael Neser, who comes in after Lehmann’s dismissal, drives the second ball on the up with a drive over backward point! SIX! Superb, powerful pull by Neser off McKay to send the ball over midwicket! FOUR! Ross ends the nightmarish over for McKay with a four towards fine-leg! FOUR! Russell flicks a yorker off Russell towards midwicket off the first ball of the over! OUT! Russell makes a comeback in the final ball of the 19th over, with Neser getting his off-stump rattled while attempting a scoop shot. BOWLED! McKay gets rid of Ross with a slower one, with the batsman falling short of a well-deserved half-century by three runs. And Adil Rashid hammers two fours and a six off the last three balls to collect 14 runs, and guide Adelaide Strikers to 159 at the end of 20 overs! OUT! Michael Neser b Andre Russell 27(16), Alex Ross b Clint McKay 47(38)

How about the mullet from Damien Fleming. #BBL05 @bowlologist pic.twitter.com/6b3dim6hqo

LIVE CRICKET SCORE: Adelaide Strikers 105/4 in 15 overs; BATTING: Alex Ross 35(29), Jake Lehmann 14(13): FOUR! Ross guides the first ball of the 13th over by Watson down towards the vacant third man! FOUR! Lehmann at work this time, pulling this time towards backward square-leg for the second four of the over! Meanwhile, the 100 is up for the Strikers in the 14th over.

OUT: Lehmann tries to hit it out of the park. Gets as far as the ring. 5-106 LIVE: https://t.co/ZrqaGwjxbJ #BBL05 pic.twitter.com/NbHSHY1bFy

LIVE CRICKET SCORE: Adelaide Strikers 84/4 in 12 overs; BATTING: Alex Ross 24(19), Jake Lehmann 4(4): OUT! Hodge departs after hitting the six, getting his stumps rattled by Green for 14 as Strikers lose their fourth wicket with 64 on board! CONSECUTIVE FOURS! Ahmed’s misery with the ball continues, with Ross smashing him towards the leg side thrice in the first four balls! 13 runs off five balls of the expensive over so far, and Jake Lehmann, son of Darren, takes a single off the final ball of the over. OUT! Brad Hodge b Chris Green 14(19)

LIVE CRICKET SCORE: Adelaide Strikers 61/3 in 9 overs; BATTING: Brad Hodge 13(17), Alex Ross 6(8): Skipper Hodge and Alex Ross and dealing in ones and twos at the moment, following the dismissal of Head off the bowling of McKay. SIX! Skipper Hodge sweeps Fawad Ahmed over square-leg for a massive hit, breaking the monotoniety that was growing following Head’s dismissal.

LIVE CRICKET SCORE: Adelaide Strikers 43/3 in 6 overs; BATTING: Brad Hodge 1(4), Alex Ross 1(2): Consecutive boundaries! Travis Head, who is currently the third highest-run-getter in the ongoing tournament, lights up the over with two consecutive boundaries at the start of the over off McAndrew. FOUR! Superb cut by Head, who is displaying superb form at the moment, with the ball racing away towards backward point! That is followed by a couple of vicious bouncers from Russell, one of which goes for five wides, while the other is adjudged a no-ball! FOUR! Superb drive through the covers by Head off McKay at the start of the sixth over! OUT! Head departs this time after getting caught by Ben Rohrer at cover while going for an ambitious drive to depart for 23. Meanwhile, McKay becomes the highest wicket-taker in the competition. OUT! Travis Head c Ben Rohrer b Clint McKay 23(17)

LIVE CRICKET SCORE: Adelaide Strikers 13/2 in 3 overs; BATTING: Travis Head 2(4), Brad Hodge 0(0): Andre Russell concedes two runs in a good first over, before Jayawardene smashes Shane Watson over midwicket for a massive six! The first six of the innings! OUT! What a comeback by Watson, who manages to induce Jayawardene to play a drive on the up, and get an edge to the wicketkeeper in the process for Adelaide to lose their first wicket with 7 on board. OUT! Adelaide lose their second wicket with just 11 on board in a disastrous start, with Tim Ludeman departing for two. Russell takes a stunning catch while running backwards near extra-cover, after Ludeman gets a top-edge while attempting a flick! OUT! Mahela Jayawardene c Chris Hartley b Shane Watson 7(6), Tim Ludeman c Andre Russell b Clint McKay 2(7)

Hussey is currently the second-highest run-getter in the ongoing tournament with 277 runs from seven innings at a superb average of 55.40. He is closely followed by Travis Head of the Strikers, who has scored 276 runs in the tournament so far, including a match-winning, unbeaten 101 against the Sydney Sixers in the 14th match of the tournament on home soil.

Adelaide’s Adil Rashid however, will be a key figure with the ball in the upcoming match. With 15 scalps to his credit, he currently tops the bowling charts at an average of 13.20, as well as an economy of a little over six. He closely followed by the likes of Clint McKay and Andre Russell, both of whom have taken 14 wickets each to occupy the second and third spots in the bowling charts respectively (McKay has a better average and economy).

The winner of this game will head to the final, where they will meet the winner of the second semi-final, which will be contested between Melbourne Stars and Perth Scorchers at the Melbourne Cricket Ground on Friday. The final is to take place on Sunday. 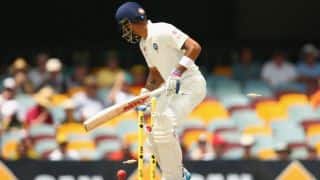 "I am suffering because I am a Hindu, a minority in Pakistan," says Danish Kaneria