Hello and welcome to CricketCountry’s live coverage of Day 2 of the Group A game of the 2015-16 Ranji Trophy between Delhi and Bengal, live from Feroz Shah Kotla, Delhi. Bengal had an excellent Day One against group-toppers Delhi, and will resume Day Two on an emphatic 272 for 3 at their den. Despite an ordinary start, some quality batting from Sudip Chatterjee, Manoj Tiwary, and Wriddhiman Saha saw them put on a big total. Delhi may take consolation in the fact that Bengal have a long tail, and once they break through, they may get Bengal all out cheaply. Bengal, on the other hand, should aim for the 450-mark. READ: Ranji Trophy 2015-16, full coverage here

Live cricket scores Delhi 71/3 | Overs 26 | Batting: Nitish Rana 20(51), Milind Kumar 6(31): After getting bowled out for 357 from 135.5 overs, Bengal struck back early as they made three early breakthroughs after Delhi began their innings. The wicket-takers for Bengal were Ashoke Dinda, Veerpratap Singh and Pragyan Ojha. Delhi skipper Gautam Gambhir miserably failed when he got out for a golden duck after getting LBW off Dinda’s delivery on the very first ball he had faced. At stumps, Delhi trail Bengal by 286 runs.

Live cricket scores Bengal 344/7 | Overs 125 | Batting: Veerpratap Singh 14(41), Aamir Gani 25(66): Manan Sharma struck again, a second wicket for him in the match as he removed Sayan Shekhar Mandal for 15 from 66 balls in the 115th over, leaing Bengal at 320 for 7. That dismissal brought tailender Veerpratap Singh on the crease. The other wicket-takers for Delhi so far have been Parvinder Awana, Sumit Narwal, Navdeep Amarjeet and Pradeep Sangwan. OUT! Sayan Shekhar Mandal LBW Manan Sharma 15(66)

Live cricket scores Bengal 294/6 | Overs 100 | Batting: Sayan Shekhar Mandal 3(18), Aamir Gani 1(2): Wicketkkeper-batsman Wriddhiman Saha managed just five runs on Day 2 before getting dismissed in the 96th over. Meanwhile, centurion Sudip Chatterjee also did not last long on Friday after a great show on the opening day of Round 4. Moreover, it was huge blow for the visitors when both the batsmen were dismissed in the same over that brought two new batsmen on crease. Pankaj Kumar Shaw was one of them who lasted only three balls, he smashed for a four before getting out in the 97th over.

Bengal into the match without Laxmi Ratan Shukla, Shreevats Goswami, and Abhimanyu Easwaran, which meant they had only four specialist batsmen alongside Wriddhiman Saha. When the openers, Parthasarathi Bhattacharjee and Naved Ahmed, fell cheaply, things seemed hopeless for Bengal at 27 for 2. The openers had seen off Sumit Narwal and Parvinder Awana, but Manan Sharma (son of Delhi legend Ajay) and Navdeep Saini struck. Then Tiwary (55 from 126 balls, 6 fours, 1 six), the captain, took charge, dominating a 103-run third wicket partnership with Chatterjee, taking the fight to the Delhi camp. He eventually fell to Pradeep Sangwan. 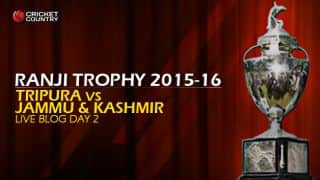