Catch Live Updates of Day One of action of the Ranji Trophy 2015-16 clash between Bengal and Delhi at Feroz Shah Kotla.

Hello and welcome to CricketCountry’s live coverage of Day 3 of the Group A game of the 2015-16 Ranji Trophy between Delhi and Bengal, live from Feroz Shah Kotla, Delhi. Bengal’s first-innings collapse meant the sides ended the day with play in balance. Delhi will begin Day Three on 100 for 3, still 257 in arrears, with Nitish Rana and Milind Kumar having averted the danger after they were 56 for 3 and not out at stumps. Earlier, Bengal finished on 357 after early dismissals of the overnight batsmen Sudip Chatterjee and Wriddhiman Saha. The match hangs in the balance, and a keen contest is expected today. READ: Ranji Trophy 2015-16, full coverage here

Live cricket scores Bengal 47/3, 357 | Overs 85 | Batting: Manoj Tiwary 21(64), Aamir Gani 10(22): At stumps of Day 3, Bengal led Delhi by 155 runs after bowling out their opponents for a mere total of 249. Earlier in the day, Pragyan Ojha led the Bengal’s bowling attack with his four-wicket haul and he was well supported by fast bowler Ashoke Dinda who also bagged as many as three wickets. The other wickets for Bengal were shared between Veerpratap Singh, Aamir Gani and Sayan Shekhar. Meanwhile, Milind Kumar top-scored for Delhi with his 193-ball 77. Also, Nitin rana made a crucial contribution with 43 runs from 135 balls.

Live cricket scores Delhi 185/6 | Bengal 357 | Overs 85 | Batting: Milind Kumar 69(181), Manan Sharma 0(5): After Nitin Rana’s wicket early on Day 3, Bengal made another two breakthroughs in the 63rd and 84th over respectively. While Yogesh Nagar did not last more than 31 deliveries, Pradeep Sangwan faced a total of 81 balls but scored only 12 runs. From here, Delhi trail Bengal by 172 runs.

Live cricket scores Delhi 135/4 | Bengal 357 | Overs 62 | Batting: Milind Kumar 32(135), Yogesh Nagar 10(28): Pragyan Ohja made an early breakthrough on Day 3 removing the set batsman Nitish Rana on the second delivery of the 55th over. Ohja now has two wickets in the match so far. Meanwhile, Milind has to play a responsible innings in order for Delhi to recover. From here, Delhi trail Bengla by 222 runs. OUT! Nitish Rana LBW Pragyan Ojha 43(135)

Bengal resumed on 272 for 3, and lost both set men (and Pankaj Shaw) by 291. There was some fight from Sayan Mondal, Aamir Gani, and Veer Pratap Singh, but it was not enough: Bengal lost their last 7 wickets for 72 and were bowled out for 357, Pradeep Sangwan being the pick of the bowlers with 4 for 48. Ashok Dinda trapped Gautam Gambhir leg-before first ball in response. Pragyan Ojha and Veer Pratap also struck, and it was left to Rana and Milind to start the rescue action. Dinda and Ojha will hold the key for Bengal on a day that promises some exciting cricket. 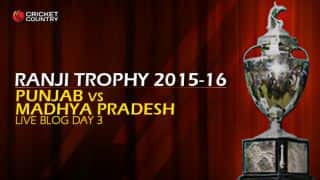