Catch all the live scores and updates of Delhi vs Vidarbha, Ranji Trophy 2015-16, Group A match, Day 2 at Delhi.

Hello and welcome to CricketCountry’s live coverage of Day Two of the second game in the group stage of the Ranji Trophy 2015-16 between Delhi and Vidarbha at the Feroz Shah Kotla Stadium in Delhi. Delhi earned only one point after their first Ranji Trophy 2015-16 ended in a draw and Rajasthan earned 3 points based on first innings lead. Vidarbha, who also drew against Odisha, earned 3 points on basis of first innings lead. Delhi will be led by former India opener Gautam Gambhir, whereas Vidarbha will be led by Subramanium Badrinath. Vidarbha will be hoping that Wasim Jaffer, former Mumbai stalwart, put up a big score, after failing to make an impact in the first match.

Ishant Sharma impressed everyone with an impressive effort of 3 for 26 as Delhi restricted Vidarbha to 222 for 6 on the first day of their Ranji Trophy Group A match at Kotla on Thursday. Ishant worked up good pace and bounce from the Feroz Shah Kotla strip after Gautam Gambhir opted to field. The lanky speedster bowled in four short spells and got wickets in three of those spells. For Vidarbha, Faiz Fazal (55) and Subramanium Badrinath (44) added 89 runs for the third wicket in 38.4 overs. While they steadied the innings from 16 for 2 after Wasim Jaffer (0) was run out without playing a ball.  Read all Ranji Trophy 2015-16 team previews here

Live cricket scores Delhi 112/2 | Overs 52  | Batting: Gautam Gambhir 53(153), Nitish Rana 47(114):
Gambhir has slightly slowed down after reaching his half century. In the last 24 balls he has scored just three runs. Nitish Rana is nearing his fifty too.

Live cricket scores Delhi 20/1 | Overs 11  | Batting: Gautam Gambhir 14(38), Pradeep Sangwan 4(19):
Vidarbha draw first blood in form of Unmukt Chand but the good thing for Delhi is that Gautam Gambhir is still on the crease and is taking his time to settle down.

OUT! Unmukt Chand run out Wakhare 1(9)

Live cricket scores Vidarbha 241/7 | Overs 99  | Batting: AA Wakhare 6(18), SB Wagh 7(25):
Vidarbha who ended their first day on 222 for six lost their seventh wicket in the first few overs itself today morning. They will hope that their tailenders halp them reach the magic figure of 300. Ishant Sharma has taken four wickets as of now. 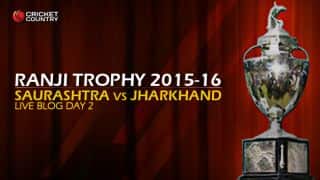 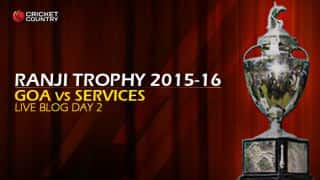