Vidarbha were staring at a gloomy result finishing on a score of 47 for 4 at the end of Day 3.

Hello and welcome to CricketCountry’s live coverage of the final day of the ongoing Ranji Trophy 2015-16 Group A fixture between Delhi and Vidarbha at the Feroz Shah Kotla Ground in New Delhi on Sunday. Vidarbha were sitting precariously on a score of 47 for four at the end of the previous day after the Delhi bowlers ran through their top-order, with Ganesh Satish and Aditya Shanware batting on 9 and 1 respectively. Pradeep Sangwan was the chief wrecker of the Vidarbha top-order, taking two wickets for 22 runs, while Ishant and Manan Sharma took a wicket each. Delhi had earlier gained a slender four-run lead over their opponents when they were bowled out for 302 in their first innings, with skipper Gautam Gambhir top-scoring for his side with a score of 96.

Nitish Rana (61) was caught at silly point while Gambhir’s (96) six and half hour stay at the crease ended when he tried a slog sweep off Akshay Wakhare (5 for 113) only to get bowled. He hit 12 boundaries in 236 balls but his dismissal put tremendous pressure on the middle order as Milind Kumar (20) and Vaibhav Rawal (0) were dismissed cheaply.

Delhi have won their encounter against Vidarbha quite comprehensively. They have beaten their opponents by 10 wickets, securing all seven points that were their on offer. Delhi’s international stars Gambhir and Ishant played their part in the win, so did young Manan Sharma. Gambhir scored a valiant 96 in the first innings, followed by a blazing 45 off 43 ball in the second. Ishant finished the match with 9 wickets while Manan picked up three important wickets in the second innings apart from scoring a vital 53 in the first innings. Vidarbha simply had no answer to Delhi’s aggression today. They did put up a fight in the first innings and matched Delhi evenly. However, their second innings went horribly wrong as they were shot out for just 98, leaving Delhi with just 95 to win. With this win, Delhi have consolidated their position, while Vidarbha will have to get back to the drawing board and figure out their strategies for future fixtures.

Set a modest 95 to win, Delhi have come out all guns blazing. Their openers Gambhir and Chand have come out with a positive intent post-lunch and look all set to finish it in a hurry. Gambhir is playing the aggressive game, having hit four boundaries so far. Will this be a cakewalk for Delhi, or will Vidarbha produce a twist in the tale, only this session will tell.

Vidarbha’s horror came true on day four, when it crumbled against a strong Delhi side. Starting the day at 47/4, it was always going to be difficult for them to survive against a bowling attack that had Ishant Sharma in it. The overnight pair of Ganesh Satish and Aditya Shanware added just six more runs before Satish was dismissed. Shanware then added 30 runs with JM Sharma, before Delhi’s Sharmas ran through their lower order. Remaining batsmen surrendered meekly, as Ishant, Manan Sharma and Pradeep Sangwan shared three wickets each. Delhi look all set for an outright win. 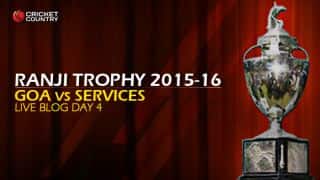