Wahab Riaz for the final battle.  26 runs to get from this. Subrayen takes two balls to get Frylinck on strike. He manages to hit a six over deep backward point but misses to connect on the next ball. Match is lost now. Lahore Lions win the match. They fought hard in the end, the team from South Africa but Lahore Lions were better. They win by 16 runs. Gives them four points.

31 runs off last two? Quite possible. Iqbal is back. Spin is the key here for Hafeez. Subrayen gets a single and brings Frylinck to face the last four. Hits the fourth delivery for a boundary but misses the last two. Fails to keep the strike.

Cheema goes for a big flat six off the first ball. 51 off 17 balls.. Some excitement left ? Frylinck is bringing some excitement in this dull second innings. Frylinck is turning it on. Two more sixes off low full-tosses over long-on . 20 runs so far.  Gets his fifty in style with a towering six over deep mid-wicket. 26 runs of Cheema over.

Wahab Riaz is back. He needs one yorker to end this show. Misses the yorker each time and Frylinck manages to hit two boundaries. Some respite finally for Dolphins run-rate.

Cheema ends a beautiful over. Doesn’t allow ball to get slogged at all. Four runs from the over.

Aizaz Cheema comes back to bowl his second over. Spinners have almost finished it. The tail is just slogging length deliveries for a couple. Abbott gets run-out. Some laziness witnessed,

Wahaz Riaz is steaming in fast. Bowls few dot deliveries to end the over. Its curtains for Dolphins. All hopes look dim now. One run of Riaz over.

Wahab Riaz damages the woodwork. Deadly yorkers does the trick.

Nasim gets a wicket on the first delivery of the over but gets hit for a six on the fifth delivery. Short delivery can’t always yield wickets. This time it was six. Run-rate has escalated beyond reach now.

Naasim gets a wicket on his first delivery of this over

Hafeez the ‘captain’ bowls a tidy over and also picks the wicket of Jaarsveld who looked dangerous.

Hits it straight to Shehzad off Hafeez. Surrenders another wicket to a Lions spinner.

Rasool ends a successful over. Gave away just four runs of it.

Rasool back for his third. Bowls two disciplined deliveries on the good line but goes for a four a juicy flighted delivery. Gets another wicket off a short bowl.

Wahab Riaz is here. Quite different and refreshing to see Riaz bowl after the 10th over. The Dophins’ batsman seize the opportunity and get two welcome boundaries of the seamer.

The run-rate is edging somewhere which will get tough at the later stages. Adnan Rasool again bowls a tidy over. Flow of runs has stopped. Spinner are winning to for Lions.

Nasim does the trick for his captain. Picks up the captain of the opposition team who got frustrated with the flow of runs and tried to flash hard at loose delivery but gets caught.

Nasim comes for his second over. Gets van Wyk

Adnan Rasool comes and bowls some off-spinners. Required rate has climed over 9. Spinners are doing the job for Lions. Ball is just sticking a bit on the track. Gives away four runs of the over and just missed getting the wicket of Vandiar.

More spin. Chinnaswamy is being treated by lot of spin by the Lions. Saad Nasim , comes to bowl some off-spinners. Gets deliveries to spin and bowls some googlies too. Keep it to 6 runs in the over.

So0, its the third over Hafeez. Vandiar plays some bowls caustiously but goes for the maximum which ends up 20 rows back.

Iqbal has done the job here for Lions. Spin is turning magic for the team for Pakistan. A neat over with a crucial wicket.

Hafeez continues with spin and brings him on for his second over. Gives only one run of his over.

Hafeez brings in Mustafa Iqbal to stop the flow of runs and does the trick Cody Chetty walks back to the pavilion playing a nothing shot.

Aizaz Cheema comes to bowl the second over. van Wyk hits him three boundaries on the off-side and collects 14 runs of the over.

Hafeez starts with the ball for the Lions and gets hit for a boundary on the third delivery but comes back and rips apart the star of the previous match , Cameron Delport.

Dolphins’ captain Morne van Wyk dropped Umar Akmal in the mid of the innings and the right-handed batsman made most of the opportunity. The South African side have only themselves to blame as they  allowed Lahore to get back into the contest. Read Sandipan Banerjee’s innings report here as we wait for the resumption of the match.

Akmal slams a spectacular six down the ground off Abbott on the third ball. The over began with a four as Lahore continued to pile on runs freely. Lahore score 109 runs off the last nine overs, and they would be fancying their chances now.

Another successful over for the Lions as they add seven runs off Frylinck. They are past the 150-run mark now, something that looked difficult at one moment.

Raza geta a four through an edge off Kyle Abbott. Lahore add another 10 runs from the over and are well in command of the proceedings now.

Asif Raza gets a lifeline as the fielder at the backward point drops a simple catch. Lions add another nine runs with the left-hander smashing a six on the final ball of the over.

Robbie Frylinck returns and strikes immediately. Nasim is trapped in front of the wickets and Dolphins have managed to break this partnership.

Dolphins bring in spinner — Subrayen — but Saad Nasim blasts him for two sixes as Lahore continue to make a strong recovery. At this rate they will post a challenging total in all likelihood.

How costly would the skipper’s dropped catch of Umar Akmal be? Lahore Lions bring up their 100 in the 15th over of the innings and they would be targeting a total close to 150-160. Akmal clobbers another six — this time off Phehlukwayo after hitting two fours early on in the over to bring up his half-century in no time.

Akmal dances down the track to hit a spectacular six off Keshav Maharaj as Lahore continue to make big strides after being nearly thrown out of the contest early on. Akmal continues the good work as he whacks another huge six on the fourth ball. Dolphins on backfoot at the moment.

Smart work by Umar Akmal who  gets a four through the third-man region on the second ball off Subrayen. Poor by the wicketkeeper-captain Morne van Wyk as he drops the right-handed dangerous batsman on the next ball. Nasim slams a four on the last ball as Lahore add another 10 to their total.

Saad Nasim slams a six off Keshav Maharaj’s first ball to start off on a positive note. Lahiore manage another 11 runs as they look to pick up after the early blows in the innings. Eight more overs left.

Andile Phehlukwayo into the attack and he starts off on a impressive note. Only two runs scored by the Lahore batsmen.

Delport is creating some sort of problems for the Lahore batsmen. Akmal gets a reprieve as an outside edge is spilled behind the wickets, and he capitalises on the next one which was way outside the off-stump, slamming it over the covers for a six. Another goo0d over for Lions as they add nine runs off it.

Poor delivery by Maharaj — down the leg side is smashed for a four by Nasim. Lahore Lions need many of those as they are in deep trouble at the moment. Nine runs added.

Big task in the hands of Umar Akmal as Lahore Lions will need a challenging total if they have to be in this game. One run and a wicket from Delport’s over.

There it is! Mohammad Hafeez is out after getting an inside edge off Cameron Delport as Dolphins are gaining complete command here in this game. Poor stroke by Hafeez indeed, Umar Akmal walks in.

Five runs off the first over from Keshav Maharaj. It’s must be appalling for the Lahore Lions to see the likes of Umar Akmal not being at the crease when his team needs the experienced players in the middle.

Lahore Lions have a huge task in their hand as they need a strong total to challenge the on-song Dolphins. Only six runs scored off Abbott as Saad Nasim cracks a four on the final ball of the over.

And another one bites the dust! Kyle Abbott cleans up Agha Salman as the Lions lose their third wicket without any significant total on board. This is a shambolic effort by the Pakistani side, full marks to Dolphins for being on top since the beginning!

Absolutely poor by Nasir Jamshed as he is caught by Keshav Maharaj off Robbie Frylinck, who bags his second wicket in the match. The batsman failed to read the length of the ball and ended up giving a simple catch to Maharaj at mid-on. Poor start this has been!

Preneyan Subrayen keeps it tight in the fourth over of the innings as the Lahore Lions manage only six runs off it. This has been a slow start by the Pakistani side in this match so far.

Robbie Frylinck into the attack now. And he gets off to a good start, couple of dots to start with. And a single now. Another dot this time to Shehzad. AND HE’S GOT HIS MAN!

Prenelan Subrayen opens the bowling. And that’s four off the first ball! Great shot from Shehzad. Good over to follow up. It’s just five runs off that one. Abbott into the attack now. Six runs off that over. So good start from Lahore.

Time for the toss now. Lahore Lions win the toss and bat first. Morne van Wyk says he would have liked to bat first as well. Couple of changes for each side.

Hello and welcome to CricketCountry’s live blog of match No 14 between Dolphins and Lahore Lions at M Chinnaswamy Stadium in Bangalore. I am Shiamak Unwalla, and I will be bringing you the over-by-over updates of the match.

Lahore Lions and Dolphins will take each other in a crucial Group A match at the Chinnaswamy stadium in Bengaluru on Saturday. This match is virtually a knock out game for both the teams as they are yet to win a match in the main stages of this year’s CLT20.

Lahore played two Indian Premier League (IPL) teams in their first two matches of the main stage. Against Kolkata Knight Riders (KKR) they fought well and dragged the match till the last over. But their second game against CSK was rainned off without a ball being bowled, which means Lahore have only two points from their two matches.

With KKR already qualified for semis and Dolphins poor showing and poor net run-rate, now it seems that the competition are among CSK, Perth Scorchers and Lahore for the one remaining spot in the semis from the group. This makes this match more important for Lahore, who impressed everyone with their performance at the qualifying round. 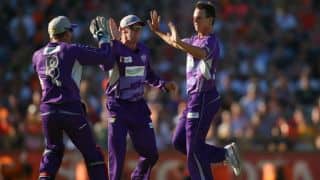