East Zone 62 | Overs 23.4
N Behera 6(16)
HS Sharath continues. AND ANOTHER WICKET DOWN! The middle stump has now been knocked out of the ground. Looks like Wriddhiman Saha won’t be batting at all. He doesn’t want to aggravate the thumb injury. So in walks Ashok Dinda. And out goes Dinda, swiping wildly at a ball that shouldn’t have been swiped at. Excellent catch by Sharath off his own bowling. So East Zone are officially all out with Saha not taking the field.
OUT! B Mohanty 0(2) b Sharath, A Dinda 0(2) c & b Sharath

East Zone 62/7 | Overs 22.3
N Behera 6(16)
The way Varun Aaron is slogging and swiping at everything, it seems this match will be over quite soon. Stuart Binny comes on to bowl now. OH IS THIS A RUN OUT? Behera smacks this back down the ground, and it has hit the stumps at the non-striker’s end. Did Binny touch this though? If he did, Aaron is way out.
OUT! V Aaron 7(9) run out Binny
East Zone 49/6 | Overs 20.1
N Behera 0(7), V Aaron 0(1)
OH AND ANOTHER WICKET DOWN! Saurabh Tiwary is run out in the most ridiculous fashion! East Zone slip further.
OUT! Saurabh Tiwary 13 (40)

Hello and welcome to CricketCountry’s live coverage of Day Three of the second Duleep Trophy semi-final between East Zone and South Zone at Lahli, Rohtak. East Zone are in dire straits at the moment, following on after being bundled out in their first innings. In reply to South Zone’s 264, East Zone made merely 84 in the first innings. Using the green surface to good effect, Stuart Binny produced a great spell that kept East Zone on the backfoot. Their highest scorer in the first innings was only 17, which shows what the track had for the bowlers.

South Zone imposed the follow on and brought in Binny early in the attack. With his kind of bowling, he could get a lot of help from the surface and he shocked the East Zone team further by snaring the three wickets upfront. At one stage, he was on a hat-trick, but missed it. Manoj Tiwary also lost his wicket later to HS Sharath. East Zone now face the uphill task ahead of Day Three. 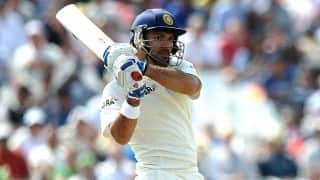