Welcome to CricketCountry’s live blog of the third day of the third Ashes 2015 Test at Edgbaston, Birmingham on Friday. This is Devarchit Varma here, and I will be presenting to you the live cricket scores and updates from the match. Hosts England will be relishing the thought of bowling Australia out once again for a lowly total to set themselves a modest target, gain a 2-1 series lead and inch closer towards regaining the Ashes from their old foes. Australia, meanwhile, will be hoping for a miracle from young wicketkeeper batsman Peter Nevill, who is batting on a score of 37, as as well as from their bowling attack. Catch live cricket scores and updates of England vs Australia 3rd Ashes 2015 Test at Edgbaston, Day 3 here

So England prove they have the ability to put aside defeats and focus on the job ahead. They have been absolutely brilliant in this Test from Day One, not allowing Australia to make a comeback. We move on to the fourth Test of the series, wherein the hosts will be without the services of their pace spearhead James Anderson. A real test for Australia if they want to win this Test series, England now have the luxury to settle down for draws.

LIVE CRICKET SCORE ENGLAND 88/2 in Overs 24: So, Ian Bell makes most of getting a game at his homeground and batting at No. 3, as he completes yet another half-century. England now need 33 more runs to win. I bet that would happen only after tea break.  BATTING: Joe Root 15 (34), Ian Bell 52 (70)

LIVE CRICKET SCORE ENGLAND 75/2 in Overs 20: Not really sure if this match is ending today. England’s scoring rate has gone down drastically, looks like no side is interested in playing right now. England still 46 runs away from win.  BATTING: Joe Root 11 (24), Ian Bell 45 (56)

LIVE CRICKET SCORE ENGLAND 51/2 in Overs 11.1: WICKET! If there are the Clarkes and Voges then there is Lyth in England batting line-up. He has been dismissed once again for cheap, trapped leg-before by Josh Hazlewood. BATTING: Ian Bell 32 (27)

LIVE CRICKET SCORE ENGLAND 51 in Overs 9: Ian Bell’s quickfire knock has thwarted Australia’s hopes ot making further inroads in this English batting line-up. Mitchell  Johnson has been summoned for the first time. England around 70 runs away from win. Lucky for Bell so far, another stroke in the air flies past gully. BATTING: Adam Lyth 12 (21), Ian Bell 32 (21)

LIVE CRICKET SCORE ENGLAND 36/1 in Overs 7: Starc is looking for swing into the right-hander Ian Bell and in bargain he has given him a couple of loose balls to hit them for boundaries. In the seventh over of the innings Starc was hit straight down the ground, past the fielder at point and then on the fine leg region. Bell is off to a flier, and has luck in his favour when Michael Clarke spills him in the slips. BATTING: Adam Lyth 8 (19), Ian Bell 21 (11)

LIVE CRICKET SCORE ENGLAND 11/1 in Overs 4.1: BOWLED HIM! Mitchell Starc knocks off the off-stump of the English captain on a peach of a delivery. It was pitched straight and full and Cook failed to put his bat on it. England lose their first wicket.  BATTING: Adam Lyth 4 (12),

England will need 117 more runs to win and they have all 10 wickets intact. Should be easy.

LIVE CRICKET SCORE ENGLAND 4/0 in Overs 2: It is time for lunch as England get four runs in the second over of their chase. Poor start this from Josh Hazlewood who gives easy scoring deliveries to Cook on the leg side. England will need 117 more in the second session to win. BATTING: Adam Lyth 0 (6), Alastair Cook 4 (6)

LIVE CRICKET SCORE ENGLAND 0/0 in Overs 1: Mitchell Starc starts off for Australia and Adam Lyth plays out a maiden. A golden opportunity for Lyth and company to get some much-needed runs and save their places. BATTING: Adam Lyth 0 (6), Alastair Cook 0 (0)

So, England will chase 121 runs to win and if their famed top-0rder to continues to falter, this could be anyone’s game. Australia have taken the field. English openers will be out soon.

LIVE CRICKET SCORE AUSTRALIA 265: Mitchell Starc was the last batsman to get out. Starc gave a thick edge to Poysden into the covrs off an outside off delivery from Moen Ali. BATTING: Nathan Lyon 12 (16)

LIVE CRICKET SCORE AUSTRALIA 263/9 Overs 77: England may start getting a little nervous if these two keep batting with the same authority they have so far. Both Lyon and Starc and have looked very assuring. Australia lead by 118 runs. BATTING: Nathan Lyon 12 (13), Mitchell Starc 56 (98)

LIVE CRICKET SCORE AUSTRALIA 252/9 in Overs 74:  Australia’s lead has gone past 100 and it is important for them to make runs on every opportunity. Stokes and Moeen Ali bowling for England now. Both Starc and Lyon looking to get as many runs as possible. BATTING: Nathan Lyon 5 (6), Mitchell Starc 53 (87)

LIVE CRICKET SCORE AUSTRALIA 245/9 in Overs 72.2: Half-century for Mitchell Starc but Hazlewood has fallen immediately ! The left-handed tailender Starc hits a couple of blows down the ground and a massive six, off Moeen Ali, to bring up his half-century! This is the fifth half-century in Test cricket. But soon after that, Hazlewood’s innings is ended with a superb catch by Joe Root in the slips. Australia lead exactly by 100. Last man, Nathan Lyon is in. BATTING: Mitchell Starc 51 (83)

LIVE CRICKET SCORE AUSTRALIA 226/8 in Overs 69: Runs have dried up for Australia after the dismissal of Peter Nevill, but Starc and Hazlewood both have done really well to keep England at bay. Australia’s hour I’d say, they lost only one wicket and added more than 50 runs. Australia lead by 81. BATTING: Josh Hazlewood 7 (11), Mitchell Starc 36 (72)

LIVE CRICKET SCORE AUSTRALIA 217/8 in Overs 64.2: And there it is!!! England have the first wicket of the day and Peter Nevill has fallen after a magnificent stand with Starc. Finn’s delivery was going down the leg, the batsman tried to flick it on the leg side for runs. The ball took the edge and a superb take from Jos Buttler ended his resistance. Australia lead by 72, have two wickets in hand now. Josh Hazlewood walks out. BATTING: Mitchell Starc 34 (55)

LIVE CRICKET SCORE AUSTRALIA 217/7 in Overs 64: Not so good morning for England as they have leaked at more than five runs an over. Mitchell Starc has given excellent support to Nevill so far. An edge flew between the slips for four but there have been a few commanding drives for fours as well. Australia lead by 72 runs now. England have not made any bowling change yet. Nevill and Starc have added 64 runs for the eighth wicket so far. BATTING: Peter Nevill 59 (145), Mitchell Starc 34 (55)

LIVE CRICKET SCORE AUSTRALIA 207/7 in Overs 61: So far, so good for the Australians. They have extended their lead past 50 and have batted reasonably well against Broad and Finn. There was a chance for England though, when a delivery from Broad brushed Nevill’s gloves and Jos Buttler asserted it was out. However, England could not review it because they had none left. Australia lead by 62 at the moment. BATTING: Peter Nevill 57 (135), Mitchell Starc 26 (44)

LIVE CRICKET SCORE AUSTRALIA 187/7 in Overs 57: Nevill looked to leave one ball from Steven Finn and the ball took an inside edge, missed the wickets by a few inches and races down for a boundary. Nevill then puts one on the leg side for a boundary to bring up his maiden Test half-century, something that should have happened in the last Test. Australia lead by 42 runs. BATTING: Peter Nevill 53 (126), Mitchell Starc 10 (32)

LIVE CRICKET SCORE AUSTRALIA 176/7 in Overs 56: Australia add eight runs in the first over of the day from Stuart Broad with Peter Nevill getting a boundary through slips. James Anderson’s absence will pinch England and Australia will feel they have a slightly lesser pressure this morning. Australia lead by 29 runs. BATTING: Peter Nevill 45 (123), Mitchell Starc 7 (29)

England were the clear winners at the end of the second day after an all-round domination on the opening day of the Test. Resuming from their overnight score of 133 for the loss of three wickets, the hosts were in for some trouble as they began to lose wickets in a heap, with Bairstow and Stokes being dismissed in a space of a couple of deliveries in the 31st over. At 190 for seven, Australia seemed to have announced their presence in the Test, before an 87-run eighth-wicket stand between Moeen Ali (59) and Stuart Broad (31) dampened their spirits once again. England gained a lead of 145 by the time they were bowled out. ALSO READ: Moeen Ali and Stuart Broad’s p’ship unlucky for Australia

Australia went on to produce a near-repeat of their horrendous first innings performance. David Warner (77) stood out as the sole fighter in the Australian top-order while the rest of the batsmen crumbled around him. This time, it was Steven Finn (5 for 45), whose fifer did the damage for the hosts. ALSO READ: Steven Finn sinks Australia 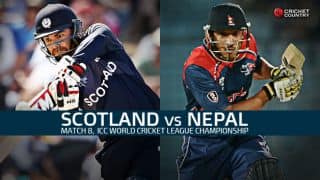 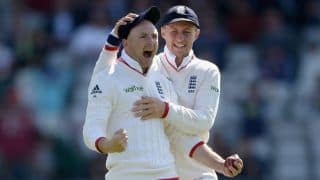