At stumps England still trail by 60 runs with eight wickets in hand. Alastair Cook and Ian Bell will look to continue from where they left off today. Day Four will be crucial for both teams.

Ian Bell and Alastair Cook looking in extremely good nick as they look to play the day out without any loss of anymore wickets this is an excellent partnership between them so far.

Ian Bell is looking in excellent touch. He has already smashed four boundaries. Alastair Cook at the other end is watching the ball cautiusly as he looks to play out the remaining overs. England also bring up their 50.

Gary Ballance has his off stump disturbed as Tim Southee bowls an excellent out swinger to get rid of the left-handed batsman. Brilliant start by New Zealand. England on the back foot once again in this match.

England lose an early wicket in Adam Lyth but Alastair Cook and Gary Ballance will want to get some momentum going in this innings and make ure that they do not lose any more wickets till stumps.

It’s all over for New Zealand. They have been bowled out and have secured a lead of 134 runs. Now England will look to come out to bat with positive intent and look to not lose any wickets till the close of play.

BJ Watling gets to yet another half-century but New Zealand lose Matt Henry early into the session off the bowling of Mark Wood, his third of the innings. England are just one wicket away from wrapping up the New Zealand’s innings.

Another eventful session comes to an end. BJ Watling is nearing his half-century and he has debutant Matt Henry for support at the other end. New Zealand are in a commanding position and will want to get as many runs as possible before the close of play.

Kane Williamson and Mark Craig have been dismissed of three deliveries. Williamson inside edged a ball on to his pads off the bowling of Moeen Ali and Gary Ballance at forward short leg took an easy catch. Craig was the next to go, trapped LBW to Moeen again. Tim Southee and BJ Watling will want to make sure New Zealand get past 500.

BJ Watling has looked impressive in his brief innings so far. He has had a couple of top edges, not carrying to any fielder. Williamson has looked steady but his scoring rate has dropped a notch. England bowlers are creating opportunities at the moment.

England spill two easy catches, one of them is dropped by Ian Bell and the other one is dropped by skipper Alastair Cook. and it was the big wicket of Kane Williamson on both occasions, whose catch was dropped.

OUT! Corey Anderson tries to play the ball down to fine leg, but it hits his gloves and Jos Buttler takes a magnificent catch behind the wickets. Wicket keeper BJ Watling is the new batsman for New Zealand. Kane Williamson is looking solid at the other end.

Play finally resumes at Lord’s after a huge break due to rain. Kane Williamson and Corey Anderson will look to get off to a good start at the post-lunch session. The overs lst today will be made up tomorrow.

The play will finally resume at 19.15 IST and New Zealand will resume their innings at 407 for four with Kane Williamson and Corey Anderson will resume play.

Inception in the nest 15 minutes at Lord’s. Umpires to take a call after that.

Rains continue at Lord’s and as a result there will be delay in the beginning of the post-lunch session. Kane Williamson is still unbeaten on a century and has Corey Anderson to accompany him at the other end. Stay tuned for further updates.

A bit of rain shortens the session by a couple of overs, but New Zealand will feel that they are in command at this moment having secured a slender lead. Kane Williamson is batting magnificently and does not seem like relinquishing his wicket at the moment. Corey Anderson came into join Williamson after Brendon McCullum went for 42.

Brendon McCullum is dismissed after playing a brisk innings. McCullum was looking to hit the ball on the on side, but it took the top edge and went straight to Joe Root at third man giving Mark Wood his first Test wicket. Corey Anderson is the new batsman. Huge appeal against Kane Williamson for LBW upmire turns it down. Cook takes the review, but the umpire’s call stands.

England have managed to keep the New Zealand batsmen quiet. Stuart Broad bowled an excellent spell and also managed to get the wicket of Ross Taylor early on. Another wicket here and England will have the momentum going into the lunch break, which is just around the corner.

New Zealand have reduced their scoring rate a little bit ever since the dismissal of Ross Taylor. But Brendon McCullum and Kane Williamoson will look to bat through lunch and establish a small lead.

OUT! Ross Taylor is caught down the leg side off the bowling of Stuart Broad. Taylor was looking to pull a short ball down the legside, but it took his glove and wicket keeper Jos Buttler completes an excellent diving catch. New Zealand skipper Brendon McCullum is the new batsman.

Kane Williamson and Ross Taylor are batting extremely well as they near their 200-run stand. England had earlier taken the new ball and will want to pick up at least a couple of wickets in the next hour.

Kane Williamson gets to his 10th Test century and Ross Taylor too has reached his fifty. This partnership is lookig more and more dangerous and England will want to get rid of the batsmen as soon as possible. New ball has been taken as well.

Hello and welcome to CricketCountry’s coverage of the third day of the first Test between England and New Zealand at Lord’s. This is Pramod Ananth, and I will be bringing to you all the live updates from the third day’s play. Live scorecard: England vs New Zealand, 1st Test, Lord’s, Day 3

Kane Williamson’s unbeaten 92 rounded off a fine day’s work for New Zealand on Day Two of the first Test against England at Lord’s. The Black Caps ended the second day well-placed at 303 for two, just 86 runs behind England’s first innings 389. Williamson and Ross Taylor (47 not out) had so far shared an unbroken stand of 155 after coming together when the tourists had lost two wickets with their score on 148. READ: Kane Williamson, Martin Guptill power New Zealand to 303/2

But Williamson was given a reprieve late in the day when he went down the pitch to off-spinner Moeen Ali on 92 only for Jos Buttler, still more of a batsman than a wicketkeeper, to miss the stumping chance, albeit the ball spun sharply. Earlier, Martin Guptill made 70 in his first Test in two years and was well-supported by Tom Latham (59) during what was just New Zealand’s fifth century opening stand in a Test in England, AFP reported. READ: England vs New Zealand, 1st Test at Lord’s: What lies ahead? 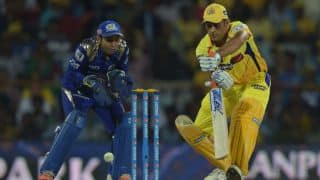 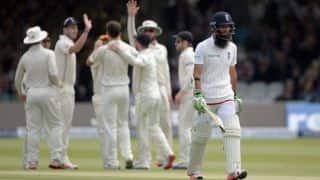