Hello and welcome to the first day's play between England and New Zealand in the 2nd Test at Headingley.

(Will England continue their good momentum or will New Zealand come back to draw the series? Catch live cricket scores and updates here)

A hard working day for New Zealand, they had their moments but did not captilaise. Tom Latham and Luke Ronchi missed out on scoring tons and that put England on top. You can read the report here.

Tim Southee did not bat quite as expected with just five overs to go, he pulled one down to square leg fence. Mark Craig and Trent Boult ensured they play through the day.

England are trying their best to run through the tail but Mark Craig has hit some lovely shots to find the boundaries. With just five overs to go, New Zealand will want these two to bat through the day.

Tom Latham’s luck runs out. He is caught by Joe Root at last in the slip cordon off the bowling of Stuart Broad. Mark Craig comes out to bat and he needs to bat through the day. Latham was distraught as he walked off, he had a small period to play through but he could not and missed out on a century. Broad returned to dismiss Ronchi as well who too missed out on his ton and was out pulling one down to James Anderson at fine leg.

England drop Tom Latham thrice in eight balls. Mark Wood dropped Latham at backward square leg, Gary Ballance dropped him next ball at leg slip, Alastair Cook then drops him, at first slip in the next over. Tom Latham is playing with his luck here.

Luck seems to be running with Tom Latham as he has quite gone into his shell a bit. Moeen Ali again traps him in front, trying to sweep. England review it but umpire’s call saves him. Ronchi has continued on his merry way. He top edged a pull, then pulled one wide of Jos Buttler for a boundary down to fine leg.

Luke Ronchi has brought up his fifty, his maiden one, on his Test debut. He brings it up with a short arm jab over the mid-wicket fence for a maximum. He though needs to carry on and score a big one.

Ronchi is living dangerously going for this shots. Alastair Cook brings on Moeen Ali who has not quite got enough purchase from the surface. Ronchi has taken the aggressive route to him, already has scored a boundary and a maximum off him. New Zealand continuing their aggression as Latham survived a scare when England reviewed a leg-before which was not given out as there was an inside edge.

Luke Ronchi continues to be himself, has hit a couple of powerful hits to the fence. Latham has been beaten a couple of times but he has got good support from Ronchi who is driving the ball well and finding the fence.

New Zealand continue to lose wickets at the other end. This time, Mark Wood beats BJ Watling with a beauty to clean him up. This is not good from the Kiwis. Luke Ronchi comes out to bat and gets off the mark with a slash over third man. Nervous times these!

BJ Watling has got going with a couple of nice drives. The ball is though beating the bat at regular intervals. Tom Latham though continues to look good and is timing the ball really well.

What a start, Brendon McCullum looks to get going right away after Tea but ends up chipping it straight to the mid off fielder for a simple catch. England are right back on top! BJ Watling is the new man in and played out the over from Ben Stokes. New Zealand need a big stand here.

We’re back for the final session of play. Brendon McCullum and Tom Latham are out to bat for the Kiwis. This is a crucial session for them with almost 40 overs left in the day. The sun is shining bright and England will know if McCullum starts off as he does normally, they might be chasing leather today. Ben Stokes to start off the final session today.

Both the batsmen have been content on playing the ball on the merit. Latham has left the ball well while McCullum has been troubled by the odd short ball. England have not quite been at their best and will want to bowl better in the last session.

Brendon McCullum has let his emotions known as he got off the mark with a thunderous carve over point for a maximum. He is batting at his normal pace. At the other end, though, Tom Latham has brought up his fifth Test fifty and is looking very good for a big one.

Both Ross Taylor and Tom Latham were on the attack and were not hesitant from going after the bowling. England did bowl a bit all over the place here. Tom Latham in particular has not been shy of playing his shots. Broad though has struck at the right time. Ross Taylor left a incoming delivery on the stumps, and is trapped plumb in front. England come back just at the right time.

The players are back on for the rest of the day, Ross Taylor plays out the over from James Anderson. We have 65 overs left with showers expected later in the day too. Mark Wood is bowling from the other end.

Ross Taylor gets off the mark with a risky clip since had he missed that, he would have been out plumb trapped before the wicket. The rain continues to tease one and all. It has comeback and the players are off the field. We’re in for such a day sadly.

Tom Latham has looked really good so far, hitting boundaries and picking the gaps at will. He was given out caught behind off the bowling of  Stuart Broad but he reviewed successfully as the replays show there was no bat there. Both batsmen are playing cautiously, which is also the right way to go about things now.

The rain was falling steadily and the umpires were worried. And on the second ball of the over, James Anderson bowled his out-swinger to get Martin Guptill caught at second slip by Ian Bell. Anderson became the 12th bowler to achieve the feat of taking 400 Test wickets. And just when he dismissed Guptill, the heavens opened up and the players are off the field but not for long. Anderson snaffles up Kane Williamson too as he edges one behind to the wicket keeper. New Zealand in early trouble.

Stuart Broad bowls from the other end. He has the breeze going against him but he too is right on the money. Slight drizzle on the field, but clear skies. Tom Latham gets off the mark with a clip off the last ball of the over to fine leg.

A tight start from James Anderson! Four slips and a gully in place for Martin Guptill who is tested well in the very first over. Tom Latham waits at the other end.

Just when we were to get going, the covers were coming on but now are going back. The players are out in the middle now. Martin Guptill and Tom Latham are out to bat for the Kiwis. James Anderson, one shy of 400 Test wickets will bowl with the new ball.

Toss: England have won the toss and elected to bowl first. Alastair Cook is happy to make use of the conditions. Brendon McCullum wasn’t sure of what to do so is not quite happy to bat first. Luke Ronchi will make his Test debut, replacing Corey Anderson. BJ Watling will play at No. 6.

Pitch report: Nasser Hussain doing the pitch report reckons it is a dry wicket. It is a bat first wicket, but weather forecast is not good which may have forced Cook to bowl first. The pitch might not assist turn here.

The toss will happen at 1pm with play to begin at 130pm @Yorkshireccc #engvnz ^PT pic.twitter.com/Nw4viAJrd8

Update 1200 local time: Some good news, the covers are coming off. We might start soon after the Lunch break.

Update 1120 local time: Early Lunch will be taken at 1230 local time with inspection once the covers are off. So the latest we can start is by 1310 local time.

Update 1115 local time: Some good news, the rain seems to have stopped but there is some amount of work to be done on the field, the covers are still on.

The rain has stopped and umbrellas are down! Still some work to do on the ground, but progress! #engvnz #leeds ^CE pic.twitter.com/lJ2YWGH0sa

Update 1100 local time: It continues to rain and we await further news from the ground. There are floodlights here which would mean play can start under them, also we have an extra hour to make up for the rain later in the day. Need the rain to stop for that to happen.

Update 1030 local time: Not good news folks! Toss has been delayed due to rain! Stay tuned for further updates!

Hello and welcome to CricketCountry’s coverage of the first day of the second Test between England and New Zealand at Headingley on Friday. This is Nikhil Popat, and I will be bringing to you all the live updates from the first day’s play. Read: England vs New Zealand 2nd Test: Preview

England won the first Test and are looking good to continue their impressive run at home. Everybody apart from Adam Lyth and Gary Ballance contributed to the win and skipper Alastair Cook will be delighted with their work. James Anderson is one shy of 400 Test wickets and will be looking forward to playing at a venue which traditionally suits the pacers. Even Cook is nearing a special record and will be itching to build on his back-to-back Test tons. Read: Alastair Cook: I wouldn’t put myself anywhere near Graham Gooch

Weather might be an issue as we go along in this Test but New Zealand will want none of it as they look to get back in the series and draw it now that they cannot win it. They had their moments but failed to build on them. Brendon McCullum has promised that New Zealand will not tie down on their aggression but the Kiwis need to be more careful since it was aggression that cost them the first Test, when they batted poorly on Day Five to end up losing the Test by 124 runs. The Black Caps will be hoping to put in a better performance. Read: Brendon McCullum vows New Zealand would continue aggressive approach against England 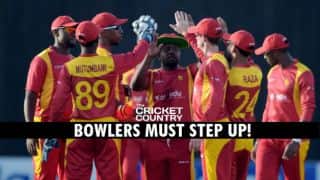