Catch live updates of the 5th ODI between England vs New Zealand here.

(Can this New England beat the most fancied New Zealand side or will Brenden McCullum’s boys bounce back? Catch live cricket score of the fifth One-Day International (ODI) between England and New Zealand here)

So that’s the conclusion of the series and it could be said the more deserving side has won. However, New Zealand will rue the half chances they let go off. Jonny Bairstow was let up twice in the field and in the end he took the game away.

Jonny Bairstow has taken this game by storm and after being awarded a few chances by the New Zealand fielders, he has taken his side home, with exactly an over to spare. New Zealand should have won this after the start they got, but instead they have lost the match and by extension the series.

So this match is going right down to the wire, Mitch Santner after giving New Zealand the best chance of winning by taking three wickets early on dropped a catch of Bairstow to make it easy for England. However, the fight is still on and it could pretty much go anyway. England now need 17 off 12.

And wicket! David Willey gets the leading edge on an attempted pull shot. England have another set back there. Meanwhile Jonny Bairstow gets to fifty. He has played quite well, but it will be heroic if he take his side par the line.

Another freak catch by the Kiwis sees the end of Sam Billings to end a partnership which has put England right back in the game. But that should considerably dampen England’s chances. Ross Taylor was the man who pulled the blinder this time at midwicket.

Half the England side is back in the hut for less than Kane Williamson’s score today. Jason Roy got out in bizarre fashion. He was shaping to pull (or maybe cut) a back of length ball from debutant Andrew Mathieson, but tried to play it down when he realised there was too much bounce, however the ball hit the leading edge and went for an easy catch to backward point.

Ben Wheeler has gotten rid of a dangerous looking Ben Stokes. Stokes was going all guns blazing but mistimed a shot straight to mid off in his over enthusiasm. England are in deep trouble at the moment.

Mitchel Santner is on a role, Root comes forward to attack him but it turns and beats his bat. Ronchi fumbles with the ball but gets it down just in time to find Root short. Santner is surely enjoying the turn on offer, there is some level of extra bounce to it appears. Eoin Morgan is in the middle now. And he perishes first ball, going for the slog-swept but found the fielder at deep midwicket.

The rain continues to come pouring down at Chester-le-Street. The players were getting ready to make their way out to the middle before rain came back. No overs lost yet, stay tuned for further updates.

New Zealand have managed to scrape up — runs in their fifty overs. The tail was held together with some good batting by Ben Wheeler. He was very good in the last over hitting Finn for a four and a couple of sixes with exquisite timing.  The England bowlers will be very happy with their effort nonetheless. This has been a series of mad hitting by standards of which, 270 looks petty. But there is something out there for the bowlers today, can NZ capitalise?

Tim Southee bowled but only after performing the job he is tailored for i.e., some late order hitting. However, things don’t look very bright for New Zealand. Will they play their share of 50 overs and if they do will they at least get to 270?

And another wicket is down, Luke Ronchi’s poor form continues. He mistimes the ball straight to mid off, Willey gets his second wicket. Tim Southee comes and hits the next ball straight over the stumps for 4. Can he resurrect this for New Zealand?

David Willey has dented New Zealand’s hopes of a strong finish by getting rid of Ross Taylor caught behind. It was good length ball, angled across Rossco and there was some movement too. Taylor nicked it and Bairstow took a good catch. Luke Ronchi and Ben Wheeler are the batsmen at the crease now.

Adil Rashid has made an important breakthrough at a crucial stage by getting rid of Grant Elliott. The googly did the trick for Rashid with Eliott advancing down the track to try and smash him over. 300 no longer looks like a possibility.

New Zealand need bit of a push on here one would imagine given the volume of runs scored in this series, but today there genuinely has been some support for the bowlers. Ross Taylor is inching towards his fifty and would like to further up the attack after he gets to the mark. One of these will have to stay through till the end if New Zealand want about 300.

Mitchell Santner is out! New Zealand are surely in some trouble here since Luke Ronchi hasn’t particularly been in good form and Grant Elliott looked shaky the previous game. Santner charged down the ground but failed to get to the pitch of it and sharp turn took the ball past his bat and clipped his leg stump.

Another big wicket for England and Ben Stokes is responsible for it yet again! Martin Guptill was increasing in fluency after getting to his fifty and he’ll be gutted to get out at this stage. Extra bounce surprised him and took the shoulder of his bat on way to the keeper. Ross Taylor joined by Mitchell Santner now.

Martin Guptill gets his fifty, but things are not necessarily sailing for NZ at the moment. Run flow has choked up a little, Ross Taylor seems to be coming into his own though. Seems to be some support for bowlers today, ball still doing a little.

The important wicket of Kane Williamson has been taken by Ben Stokes, short ball did the trick. Williamson was looking good on fifty but his wicket will again put New Zealand under some pressure. Martin Guptill is seeming to be in fine form and has now found a partner in his best friend Ross Taylor.

Martin Guptill and Kane Williamson steady New Zealand ship after the early loss of Brendon McCullum. Both batted very sensibly and kept the run rate going. England bowlers have been on the expensive side, though they got some early help from the wicket.

What a first over in this ‘Grand Finale’! Brendon McCullum hits Steven Finn to a huge six but the bowlers come back strongly and gets his wicket. Clean Bowled. Great Start for ‘New England’. Kane Williamson is st the crease now.

OUT: Brendon McCullum b Steven Finn 6 (4)

England have won the toss and as expected decided to chase.

One change for England. Jonny Bairstow comes in for injured Jos Buttler. In New Zealand playing eleven, Andrew Mathieson is making his debut in place of Mitchell McClenaghan.

Hello and welcome to CricketCountry’s coverage of the fourth One-Day  International (ODI) between England and New Zealand at Chester-le-Street. I am Rishad DSouza and I will bring all all the updates of this match. It has been a high scoring series so far and after four game, the five-match series is very well poised at 2-2.So plenty will be at stake in this series decider. READ: England vs New Zealand 2015, 5th ODI at Chester-le-Street, Preview

Jonny Bairstow was called into England’s squad ahead of Saturday’s deciding one-day international against New Zealand in Durham after wicket-keeper Jos Buttler suffered a hand injury in training on Friday. Lancashire gloveman Buttler split the webbing between thumb and forefinger on his left hand as England trained on the outfield at Chester-le-Street. READ: England have decoded ODI batting but bowling remains suspect

England already had Kent wicket-keeper Sam Billings, who has played the first four matches of this series as a batsman only, in their squad. But they opted to bring in extra keeping cover in Yorkshire’s Bairstow, with the five-match series all square at 2-2. READ: Graeme Swann urges England to keep up ODI ‘courage’ 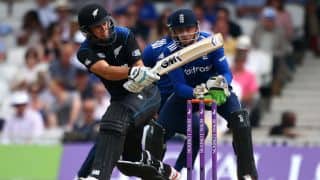 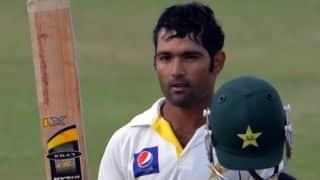