West Indies will look to restrict England on the third day of the opening Test at Lord's after Andrew Strauss ended his 18-month wait for a Test century as he led his side into a first innings lead on the second day against the West Indies at Lord's on Friday. 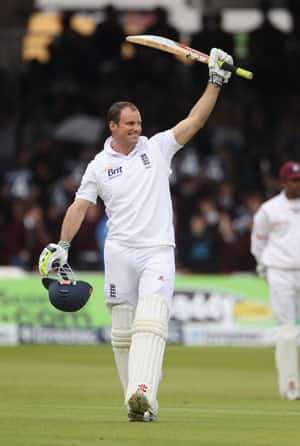 West Indies will look to restrict England on the third day of the opening Test at Lord’s.

Andrew Strauss ended his 18-month wait for a Test century as he led his side into a first innings lead on the second day against the West Indies at Lord’s on Friday.

When bad light ended play, England were 259 for three, a lead of 16 runs, after they needed just Friday’s first ball to dismiss the West Indies for their overnight score of 243.

Strauss was 121 not out and Ian Bell five not out at stumps.

But with the West Indies just two deliveries into the new ball, England’s position is far from assured in this first of a three-Test series.

This was the 35-year-old Strauss’s 20th century in his 95 Tests but the left-handed opener’s first since he made 110 against Australia at Brisbane in November 2010, a run of 25 innings without a hundred at this level.

“It’s been a while so it’s one of the more special (hundreds),” Strauss told Sky Sports.

“It’s been a long wait but it makes it all the more special to get to 100.

“As the pressure builds you really want to release it, you’re wanting to take that monkey off your back and wanting to contribute to the team, and I was able to do that today.”

Strauss came into this match facing questions regarding his recent lack of runs but the circumstances were near ideal for him to end his century drought, despite overcast conditions that saw the floodlights switched on after lunch.

The West Indies attack was willing but rarely threatening and Strauss enjoys batting at Lord’s, his Middlesex home ground, where he has now made five Test centuries including one on debut, against New Zealand in 2004.

Strauss is now in sight of the England Test record of 22 hundreds held jointly by Walter Hammond, Colin Cowdrey and Geoffrey Boycott.

His only worrying moment Friday came when he was dropped on 95 in the slips by Shivnarine Chanderpaul off what was, in any event, a Fidel Edwards no-ball.

“I was just waiting for the cut ball,” said Strauss. “He (Sammy) hadn’t bowled one for about 10 overs but thankfully it came.

“It was a very special ovation, it did go on and on. It was slightly emotional and I had to take a couple of moments.

“It’s not that often in your career you get to score a Test century and you have to enjoy them.”

He added: “It’s a good feeling to know I’ve got a few and that we’re in a good position. We want to get a good first-innings score and go on and win the game.”

West Indies did enjoyed a welcome moment of respite before the close when Kevin Pietersen, who’d looked in excellent touch while making 32 and putting on exactly 50 with Strauss, saw an edged cut off occasional off-spinner Marlon Samuels well caught by wicket-keeper Denesh Ramdin.

It was a much needed break for the tourists who, after Kemar Roach had made Strauss’s fellow opener Alastair Cook play on for 26, had to endure a second-wicket stand of 147 featuring Jonathan Trott’s 58.

Sammy, who twice came close to having Trott out for 17 after lbw and caught behind appeals were rejected, eventually got his man when Ramdin held an outside edge from the right-hander.

Chanderpaul, officially the world’s best batsman, remained stranded on his overnight score of 87 not.

Broad, son of former England opening batsman Chris, is only the seventh player to have taken five or more wickets in a Test innings and scored a Test century at Lord’s following his 169 against Pakistan at ‘the home of cricket’ two years ago.