While Afghanistan have been unbeaten so far, winning all the group matches and the semi-final, Ireland have lost just a single match in their campaign so far.

Good Afternoon, طاب مسائك, Tráthnóna maith! Hello and Welcome to the final of the ongoing Desert T20 2017, between Afghanistan and Ireland, at the Dubai International Cricket Stadium on Friday. I am Chinmay Jawalekar, and I will be bringing to you the live updates from the summit clash. Both the teams from Group A have made it to the final of the 8-team tournament. While Afghanistan have been unbeaten so far, winning all the group matches and the semi-final, Ireland have lost just a single match in their campaign so far. Interestingly, their only loss came against Afghanistan, their opponents in the final.

In the Group A match during the league stage, Afghanistan had defeated Ireland by 5 wickets at Abu Dhabi. Batting first, Ireland had scored 125 runs for the loss of 6 wickets.  Afghanistan chased down the total with eight balls to spare. Mohammad Nabi’s all-round performance in the match had earned him the Man-of-the-Match award. He first bowled a tight spell and picked up two wickets. Later, he scored unbeaten 26 off 17 balls to seal victory for his side. However, that victory notwithstanding, the final is not going to be an easy ride for the Afghanistan side.

Ireland have made a statement earlier in the day. The semi-finals as well as the final are scheduled to be played in the same day, and going by the form, Ireland look a threatening unit. In the second semi-final, they ended Scotland’s unbeaten streak by thrashing them by 98 runs. Batting first, Ireland scored 211, a huge statement ahead of the final. It thus promises to be a cracker-of-a-game between these two sides, who deserve to be the finalists.

Their players have also dominated the stats so far, as Mohammad Shahzad from Afghanistan and Paul Stirling from Ireland are joint-highest scorers in the tournament. Also, Ireland’s leg-spinner Jacob Mulder is at the top of wicket-taker’s list with 8 wickets. His opposite number Rashid Khan too is not far behind, with 6 wickets. With both these teams evenly matched, the final of the first edition of Desert T20 promises to be an enthralling affair.

A self-confessed cricket freak, Chinmay Jawalekar is a senior Writer with CricketCountry. When not writing or following cricket, he loves to read, eat and sleep. He can be followed at @CricfreakTweets.
First Published on January 20, 2017 8:15 PM IST
Last updated on January 20, 2017 11:45 PM IST
TOPICS:
Afghanistan Afghanistan vs Ireland 2017 Desert T20 Desert T20 2017 Desert t20 2017 final Final Ireland Ireland vs Afghanistan 2017 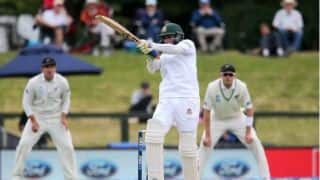