Gujarat and Baroda will take on each other on Day 2 in the Ranji Trophy 2015-16 sixth round match at Valsad.

Hello and welcome to CricketCountry’s live coverage of Day two of the Group B game of the 2015-16 Ranji Trophy between Gujarat and Baroda, live from Sardar Vallabhbhai Patel Stadium, Valsad. Gujarat captain Parthiv Patel after winning the toss elected to bat on a seemingly good track. Gujarat openers Smit Patel and Priynk Panchal got off to a great start posting a 119 runs opening stand. Panchal got out on a score of 57 to Indian discard Irfan Pathan.Panchal carried on to bat making 128 out of the 281 Gujarat made going into stumps on Day 1. Manpreet Juneja(50) and Rush Kalaria(1) remained not out at stumps. Complete coverage of Ranji Trophy 2015-16

Earlier, Priyank Panchal made a beautiful 128 was duly supported by Manpreet Juneja who remained not out on 50. Irfan Pathan was the most successful bowler of Baroda picking up 2 wickets for just 30 runs. Hardik Pandya was the other wicket taker for Baroda. Bhargav Merai also contributed making 37 while Panchal was en route his hundred.

LIVE CRICKET SCORE Baroda 82 for 3 in Overs 31: The top order batsmen Abhimanyu Chauhan and Aditya Waghmode fought well for Baroda but they have been dismissed. Baroda were reeling at 82 for 3, trailing by another 423 runs in this Group B match at the Sardar Patel Stadium in Valsad. At stumps, Ambati Rayudu and Deepak Hooda were at the crease. BATTING: Ambati Rayudu 4 (10), Deepak Hooda 3 (23)

LIVE CRICKET SCORE Baroda 30 for 1 in Overs 14: Baroda have a nice little partnership building up for them as Abhimanyu Chauhan and Aditya Waghmode seem to have dropped the anchor for their team. Baroda will have to be very cautious, and against a massive total of 505 on board, they will have to bat very responsibly. BATTING: Abhimanyu Chauhan 21 (48), Aditya Waghmode 6 (21)

LIVE CRICKET SCORE Baroda 10 for 1 in Overs 4.3: OUT!!! DEVDHAR Kedar Devdhar goes early falling prey to R P Singh. Abhimanyu Chauhan is joined by Aditya Waghmode in the middle. Waghmode has been in good form.

LIVE CRICKET SCORE Baroda 10 for 0 in Overs 3: Kedar Devdhar and Abhimanyu Chauhan open for Baroda . With a strong and powerful batting line-up Baroda will look to get near Gujarat total of 505. RP Singh and Kalaria will look to make early inroads into the Baroda team.

LIVE CRICKET SCORE Gujarat 498 for 9 in Overs 146.4:OUT!!!  KALARIA Irfan Pathan gets his 5th wicket for the match

LIVE CRICKET SCORE Gujarat 488 for 7 in Overs 144: OUT!! BHATT Irfan Pathan strikes picks up 3rd for the match.

LIVE CRICKET SCORE Gujarat 472 for 6 in Overs 140: Rujul Bhatt and Akshar Patel score their respective fifties. Akshar has hit his fifty in run a ball.Gujarat are looking good for a score well past 500. Irfan Pathan is the most successful bowler for Baroda taking 1 wicket giving away only 43 runs.

LIVE CRICKET SCORE Gujarat 379 for 6 in Overs 119: Gujarat are looking to make a big first innings score, which is expected to be around 450 given that they bat sensibly with four wickets in hand. Baroda will try and restrict them below 400. Akshar Patel has just walked out to bat with Rajul Bhatt at the crease. 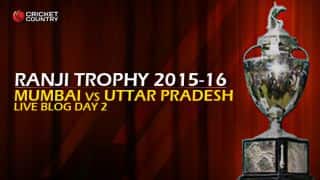 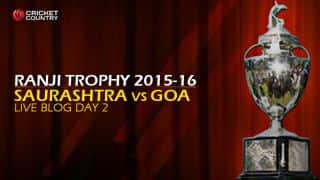