Gujarat and Baroda will take on each other on Day 3 in the Ranji Trophy 2015-16 sixth round match at Valsad.

Hello and welcome to CricketCountry’s live coverage of Day three of the Group B game of the 2015-16 Ranji Trophy between Gujarat and Baroda, live from Sardar Vallabhbhai Patel Stadium, Valsad. Gujarat have the upper hand with already taken 3 wickets heading into day 3. Baroda got off to a bad start losing Devdhar in first few overs, Aditya Waghmode and Abhimanyu Chauhan consolidated taking Baroda to 71 for 2 before Waghmode was caught by Juneja by the bowling of Karia. Chauhan soon followed getting bowled to Kalaria. Baroda at stumps were 82 for 2 trailing Gujarat by 423 runs with Deepak Hooda(3) and Ambati Rayudu(4) at crease. Complete coverage of Ranji Trophy 2015-16

LIVE CRICKET SCORE: BAR 44/1; BATTING: Kedar Devdhar 23 (60), Aditya Waghmode 0 (1) — OUT!!!! Baroda crusie well as they bat in their follow-on innings with just a loss so far in the form of Abhimanyu Chauhan for 18. H0wever, they have a mounatin to climb so far.

LIVE CRICKET SCORE: BAR 23/0; BATTING: Abhimanyu Chauhan 9 (31), Kedar Devdhar 14 (41) — No harm done to the follow-on innnings for Baroda as the opening batsmen look to bat out the whiole day and earn a possible lead.

LIVE CRICKET SCORE: BAR 238/8; BATTING: Swapnil K Singh 2 (4), PR Shah 3 (4) — TWO MORE DOWN!!!! Yes, you read it right. A couple of more batsmen have been dismissed as thye loook most certain for a follow-on with still a fair run behind.

LIVE CRICKET SCORE: BAR 156/5; BATTING: AT Rayudu 39 (88), IK Pathan 26 (34) — Baroda continue to be sloppy as they have lost fiuve wickets in their quest to match the first innings total of 505 as they look to save a possible follow on.

LIVE CRICKET SCORE: BAR 107/3; BATTING: Deepak Jagbir Hooda 9 (55), AT Rayudu 20 (57) — Having lost three wicket so far, Baroda will not be giving up so easily in their quest of the first innings as they look to bat out the whole day and inch closer to a possible lead, while the Gujarat bowlers would look to bowl them out quick and maintain a helathy lead.

Earlier resuming on 281 for 3 Gujarat made a huge total of 505 with half centuries by Manpreet Juneja(55), Rush Kalaria(68), Rujul Bhatt(61) and Akshar Patel(81). Akshar Patel made a quick fire 81 hitting 3 sixes and 7 boundaries.Bhatt and Akshar had a 109 run partnership for seventh wicket. Irfan Pathan was the pick of the bowler taking six for 47 in his 25.2 overs. Pathan cleaned up the tail completing his 18th five wicket haul in first class. Gujarat are leading Baroda by 423 runs. Hardik Pandya picked up 2 wickets in 27 overs.Baroda will want its middle order to perform well if they need to even get near to Gujarat’s total of 505. 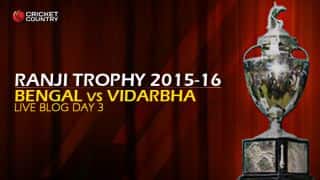 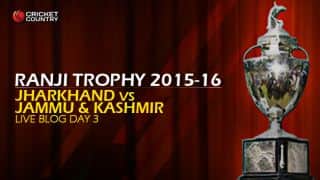