Hello and welcome to CricketCountry’s live coverage of Day 4 of the Group A match in the ongoing Ranji Trophy 2015-16, between Haryana and Bengal, live from Rohtak.Haryana came back in the game after a good bowling performance by Ashish Hooda, who somewhat cause a mini collapse in Bengal 2nd innings batting picking up 4 wickets.Sudip Chatterjee(49) was the only batsman to hit a few runs missing out on a half century. Pankaj Shaw who made 54 the last time he batted is joined by Pragyan Ohja who also put up a fight in the first innings are at the crease for Bengal at stumps. Bengal lead Haryana by 250 runs leading into day 4 .Complete Coverage: Ranji Trophy 2015-16

Bengal in their second outing were rattled by Hooda who cleaned up the middle order with Bengal still at 50-4. The only fight came from Chatterjee with captain Manoj Tiwary and Pramod Chandila failing. Sachin Rana, Yuzvendra Chahal and Harshal Patel picked up a wicket each as Bengal were 146-7 at close of play.Ashok Dinda and Veer Pratap Singh dismissed the lower order of Haryana to help Bengal get a lead of 104 by the start of 2nd innings.

Live cricket scores Haryana 195/6 & 225| Bengal 211/8 Dec & 329 |  Overs 62 | Batting:  PY Tehlan 23(53), Y Chahal 3(23): Haryana have secured a draw against Bengal here in Rohtak. Responsible batting by their middle order helped them avoid an outright defeat here. Skipper Virender Sehwag’s 46, RP Sharma’s 50 and then SR Rana’s half century took them to a comfortable situation. Bengal bowlers tried hard for a win, but they clearly missed the services of Pragyan Ojha. The desperation for wickets made even the skipper Manoj Tiwary to roll down a few overs, but no success came. The draw means Bengal have secured three points on the basis of first innings lead while Haryana got the solitary point.

Bengal must be ruing their luck, for had their strike bowler Pragyan Ojha bowled in the second innings, they could’ve pushed for a win. They do have some positives to take from the match, as their lower order played really well in the match. Haryana meanwhile will contemplate what went wrong for them in their home conditions. Performances of RP Sharma, AH Hooda, Sachin Rana and Yuzvendra Chahal were their bright spots. At the same time, failure of their opening bowlers and opening batsmen hurt them in the game. The pairs of Mohit Sharma-Harshal Patel and RV Dewan-NR Saini didn’t do well in the match. They’d hope to put up a better show next time. That’s all from here. Ciao!

Live cricket scores Haryana 149/4 & 225| Bengal 211/8 Dec & 329 |  Overs 46 | Batting:  SR Rana 29(85), PY Tehlan 3(7): Haryana have lost RP Sharma in this phase of play. Sharma scored a patient 98-ball 50 before departing. He’s played his role as he himself played over 16 overs and killed time for his team. This was Sharma’s second fifty in the match. Sachin Rana is now playing with PY Tehlan. Rana too has played a solid hand with his 85-ball 29. Bengal are terribly missing Pragyan Ojha. If only he was available, things could’ve been different for Bengal.

Live cricket scores Haryana 135/3 & 225| Bengal 211/8 Dec & 329 |  Overs 36 | Batting:  RP Sharma 49(86), SR Rana 24(55): Haryana are playing defensive game here, with both its batsmen RP Sharma and SR Rana defending anything that has been thrown their way. They are looking solid at the moment and would look to continue in the same fashion to avoid the defeat. The duo has added 56 runs for the fourth wicket so far. Bengal are missing the services of Pragyan Ojha, who got injured earlier today while batting and hasn’t taken up the field since.

Live cricket scores Haryana 87/3 & 225| Bengal 211/8 Dec & 329 |  Overs 25 | Batting:  RP Sharma 21(55), SR Rana 6(8): Haryana’s only hopes of an outside win have dashed with the fall of their skipper Virender Sehwag. The legend was looking dangerous during his stay and had smashed six boundaries by the time he got out. Before he was caught by Shreevats Goswami off Sayan Shekhar Mondal’s delivery, he had scored 52-ball 46. It goes without saying that had he stayed, the match could’ve become interesting.

Live cricket scores Haryana 58/2 & 225| Bengal 211/8 Dec & 329 |  Overs 17 | Batting: Virender Sehwag 28(34), RP Sharma 16(33): Skipper Virender Sehwag is steadying the Haryana ship at the moment. Joining him in the middle is RP Sharma, who’s unbeaten on 16. Sharma had a nice outing in the first innings as well, when he scored 78. Chasing 316 is going to be an improbable thing. Haryana however, would look to secure a draw first. That should be their first priority.

Live cricket scores Haryana 17/2 & 225| Bengal 211/8 Dec & 329 |  Overs 8 | Batting: Virender Sehwag 1(8), RP Sharma 2(5): Haryana haven’t got the best of the starts in pursuit of 316 runs to win on the fourth and the final day of the match against Bengal. They have lost both their openers RV Dewan and NR Saini with just 17 runs on board. Their skipper Virender Sehwag is out in the middle and will make for an interesting view once we return for the post-lunch session.

Live cricket scores Bengal 211/8 Dec & 329 |  Haryana 225 | Overs 93.5 | Batting: Ashoke Dinda 10(6): Bengal have declared their second innings for 211 runs at the loss of eight wickets and have set Haryana a target of 316 to win. Overnight batsman Pankaj Kumar Shaw finally became Mohit Sharma’s first victim of the match. He did his job though by scoring 61 runs. The other unbeaten batsman Pragyan Ojha retired hurt and will have to see if he will come out to bowl in the match that is set for some exciting finish.

Live cricket scores Bengal 189/7 & 329 |  Haryana 225 | Overs 89 | Batting: Pankaj Kumar Shaw 51(129), Pragyan Ojha 10(61): Bengal are showing tremendous fight on Day 4. Starting the day at 7 for 146, they’ve added 43 more runs so far. Pankaj Kumar Shaw has reached to his fifty. His knock constitutes of a mere two boundaries and most of the runs have come through singles. The Bengal tail is wagging as Pragyan Ojha too is playing a gritty knock. Ojha had a fighting fifty in the first innings too. 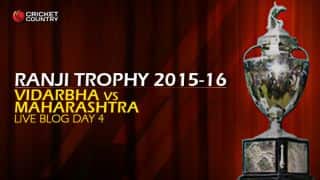