Hello and welcome to CricketCountry’s live cricket blog for the fourth day’s play of the Ranji Trophy 2015-16 between Himachal Pradesh and Services at the Himachal Pradesh Cricket Association (HPCA) at Dharamsala. At stumps of Day 3, Services were 344 for three, trailed Himachal by 187 runs with one day of the game left and seven wickets to spare. Rajat Paliwal and Yashpal Singh scored centuries and remained unbeaten on 106(221) and 102(219) respectively. The three wickets for Himachal were shared between Rishi Dhawan, Akshay Chauhan and Shresth Nirmohi. These three will be expected to strike early on the final day to ensure the hosts finish the match with a first innings lead. READ: Live cricket score, Himachal Pradesh vs Services, Ranji Trophy 2015-16, Group C match, Day 3 at Dharamsala: Visitors trail by 187 runs

Play stops due to rains!

Earlier in the day, Services openers Soumik Chatterjee and Aanshul Gupta gave a decent start to their side in reply to Himachal’s 531. While the hosts stand second on the table with 20 points, Services are below them with 16 points.  Himachal’s Paras Dogra on Day two equalled Ajay Sharma’s record of seven double tons in Ranji Trophy. The latter is also from Himachal. Dogra was dismissed a 280-ball 227 in the first innings and helped his side to post a huge first innings total of 531. 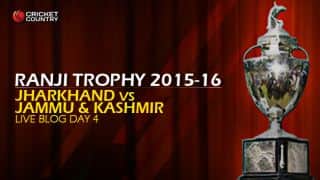