Three matches, two in Edinburgh, will be played on Tuesday.

(Can Kenya sustain their unbeaten run with a victory against a strong Scotland? Catch regular updates from the sixth day of the ICC World Twenty20 Qualifier 2015 here)

Scotland have completed a comfortable win against Kenya, who suffered their first loss in the event. Cross took them over the line, with more than five overs to go.

Matthew Cross and George Munsey struck a quick partnership of 55 in 5.3 overs to get Scotland in a strong position in their chase of 142. Munsey was out for 35 off 21 balls, with six fours and a six.

Scotland have been aggressive in their chase of 142, with Matthew Cross and Calum Macleod hitting a few boundaries. Macleod was out for an 11-ball 21.

An expensive 16th over apart, Kenya could conjure only singles and the odd double, to finish at a respectable 141 for 4. Irfan Karim’s aggression at the top of the order (46 off 26 balls) gave them a cushion. Will it be enough?

Patel and Ouma are getting runs via singles and doubles. The last four was scored at the start of the 12th over.

Two wickets, in the eighth over by Leask, and some quiet overs have pegged Kenya back a bit.

Opener Irfan Karim has hit three fours and three sixes to get Kenya off to a rapid start against hosts Scotland. Narendra Patel, the other opener, was out for 1 in the third over.

Late hitting by Abdul Shakoor and Swapnil Patil have got UAE over the line for their first victory in the competition. Despite having wickets in hand, UAE were facing a stiff ask due to the climbing required run-rate. In the penultimate over from Cecil Perviz, Shakoor hit two sixes, and Swapnil Patil chipped in with one, to obtain 21 off the over. They needed another seven runs to win in the final over, and Shakoor hit a boundary and a two to get them the win with five balls to spare (the first ball was a no-ball).

At Grange Cricket Club Ground in Edinburgh, Kenya have won the toss and have chosen to bat! That decision is a reversal from the trend by Kenya. They play hosts Scotland.

Shahzad has hit a half-century to get UAE to a solid base from which to clinch their chase. Meanwhile, here the updated points table after the upset caused by Oman.

UAE have had a string of quiet overs, but the required run-rate being low has enabled them to keep themselves well in the hunt in their chase of 133. Shahzad, who is nearing a half-century, is laying the base for it.

Two sixes from opener Mohammad Shahzad have taken UAE to a brisk start in their chase.

Regular singles, and the odd boundary from Jatinder, who has been the lynchpin of this chase, has given Oman victory by six wickets, their first over Netherlands! The brief knock from Sultan Ahmed, who stayed with Jatinder at the crease to see off the last phase of the chase, was also significant.

Although two wickets have fallen, Jatinder has given Oman a good chance of creating an upset. They need 33 off five overs now safety and stability should see them through.

Wickets in the 12th, 14th, 15th, 16th and 18th overs, to leave Canada limping, but the 19th over went for 11 runs, to help them set UAE a target of 133. Manjula Guruge, Mohammad Tauqir, Nasir Aziz and Rohan Mustafa have taken two wickets each. Canada lost six wickets for 46 runs.

Oman are placed well on their way towards an upset victory against Netherlands, helped by Jatinder Singh’s innings, and Zeeshan Maqsood, who scored 29 off 24 balls before getting out in the ninth over.

Bin Zafar was dismissed off the final ball of the 15th over, to cap off an iffy middle period for Canada. The run-rate has dipped, due to the paucity of big hits. Four wickets have also fallen.

Boundaries from Zeeshan Maqsood have helped Oman come up with a positive start to their chase of 136. Opener Zeeshan Ahmed was out in the third over.

The acceleration has eased a bit, an a wicket has also fallen. Patel has collected regular singles and doubles to keep the score moving ahead. he nears a half-century.

Play has begun after the rain interruption. Canada, after a shaky start, have boosted their run-rate via big hits from Hiral Patel, who has smashed three fours and two sixes in his brief innings so far.

Two fours, two braces and two singles in the 16th over gave Netherlands 14 runs from it. But Van der Merwe was dismissed off the next over, a relatively frugal one. The onus on acceleration was on Max O’Dowd, and he obliged, hitting fast-medium bowler Ranpura for a six and a four in the 18th over. Mudassar Bukhari, Pieter Seelaar and Michael Rippon were out within four balls in the next over, from Munis Ansari, two of them bowled and one lbw. No. 10 Timm an der Gugten was also out, off the final over, before O’Dowd fell, as the tenth wicket. Ansari emerged as the most successful Oman bowler, with 4 for 15 in 4 overs. Netherlands have lost five wickets for a single run.

An update from the ICC regarding Oman: a replacement for opener Khawar Ali, who left the tournament due to personal reasons, has been approved. Arun Paulose will replace him in Oman’s squad for the rest of the tournament.

Stephan Myburgh and Peter Borren hit a six each amid singes and dot balls, to lift their run-rate a bit. But both are out. Borren was bowled by offspinner Amir Ali, facilitating another period of slow scoring, and Myburgh was also dismissed by the same bowler, for 41 off 43 balls. The 13th over was a productive one for Oman, with that wicket and a spending of three runs. The penultimate ball of the 15th over had Roelof van der Merwe hitting a six.

Rain has suspended play at New Williamfield, after 8 balls had been bowled in the Canada vs UAE match. Canada are 5 for 2.

Barresi was dismissed for 21 by Lalcheta, stumped, and in the 10th over, Cooper was caught and bowled by Rajeshkumar Ranpura. The batsmen have been picking up singles regularly, with the occasional boundary.

A brisk start for Netherlands has been helped by consistent boundaries from opener Stephan Myburgh, and 10 extras, including eight off wides, off the second over, bowled by Ajay Lalcheta.

At New Williamfield at Stirling, Scotland, UAE have chosen to field after winning the toss against Canada.

At Watson’s, Edinburgh, Oman have opted to field against Netherlands.

Welcome to CricketCountry’s coverage of the ICC World Twenty20 Qualifier 2015. Today, the sixth day of the event, will feature three matches, two in Edinburgh, and one at Stirling. Netherlands take on Oman at 1000 local time in Edinburgh, and Canada play United Arab Emirates (UAE) at New Williamfield, Stirling, before the final match at 1415 local time, between Scotland and a yet unbeaten Kenya. 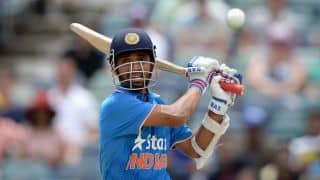 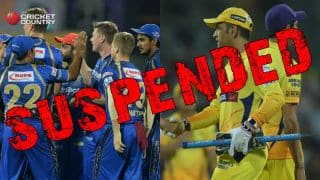