The Deodhar Trophy matches will begin at 9:00 am IST and will be played at Dr. YS Rajasekhara Reddy ACA-VDCA Cricket Stadium in Visakhapatnam.

Hello, good morning and welcome to CricketCountry’s live cricket blog and updates of first match of Deodhar Trophy 2016-17 between India Blue and India Red. We will be bringing you all the live cricket scores and posts from this game being played at Visakhapatnam. India Blue will be led by Harbhajan Singh while India Red will have Parthiv Patel at the helm. Star batsman Rohit Sharma was to ideally lead the India Blue side. But a minor knee injury ruled him out from the tournament. India Red also suffered a huge blow when batsman Kedar Jadhav was ruled out due to a stomach related ailment.

Also, Mumbai batsman Shreyas Iyer, who recently earned his maiden call-up to the Indian Test side as cover for an injured Virat Kohli ahead of the fourth Test with Australia at Dharamsala, will miss the tournament. He was named in the India Blue side. The misses notwithstanding, both teams have some big names to boast about. The Harbhajan-led side has the likes of Ambati Rayudu, Manoj Tiwary, Mandeep Singh, Rishabh Pant, Shahbaz Nadeem, Shardul Thakur et al in their ranks.

At the same time, Parthiv’s India Red side has beleaguered opener Shikhar Dhawan, Manish Pandey, Gurkeerat Mann, Akshar Patel, Ashoke Dinda, Dhawal Kulkarni among others. A day affair, match will begin at 9 am IST and will be played at Dr. YS Rajasekhara Reddy ACA-VDCA Cricket Stadium in Visakhapatnam. India Red will next play the Vijay Hazare Trophy Champions Tamil Nadu at the same ground on March 26, while India Blue and Tamil Nadu will take on each other on March 27, with final scheduled to be played on March 29. 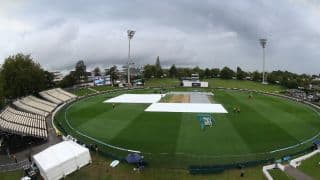