Afghanistan will look to cause the biggest upset of the tournament so far.

After Pakistan beat Bangladesh in a thrilling encounter in the Asia Cup on Tuesday to reach the final of the tournament, it’s curtains now for India as far as reaching the final is concerned. After enduring a rather poor tournament again in 2014, India will now take on Afghanistan in their last game of the Asia Cup on Wednesday at the Sher-e-Bangla stadium in Mirpur, Dhaka.

Afghanistan, on the other hand, came into the tournament as the minnows, but have produced some impressive performances throughout the tournament. They beat Bangladesh, and fought well against the giants, Pakistan and Sri Lanka. Their match against India is their final game as well, and they will go all out to cause the biggest upset of the tournament. 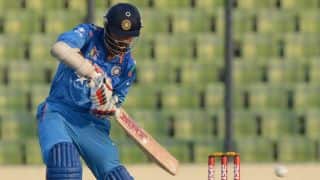