Electing to field, India restricted Australia to 171 for four in the first Twenty20 international in Sydney on Wednesday. 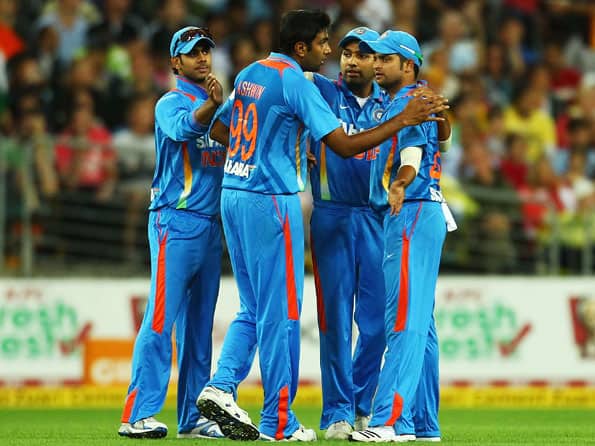 Indian players celebrate the fall of a wicket Getty Images

Electing to field, India restricted Australia to 171 for four in the first Twenty20 international in Sydney on Wednesday.

Wicketkeeper-batsman Matthew Wade was the top-scorer for Australia, while R Vinay Kumar was the pick of the Indian bowlers taking one for 28.

After being inserted into bat by MS Dhoni, Wade and David Warner got the host off to a flyer smashing the Indian bowlers to all over the park.

Just when Australia looked set for a big score, Vinay Kumar had Warner (25) caught by Raina to hand India its first breakthrough.

Birt, who looked menacing in his short stay in the middle, was sent back by Ravichandran Ashwin in the 10th over.

Meanwhile, Wade continued his onslaught along with David Hussey as the two stitched on a 56 runs partnership off just 34 balls before Wade was dismissed after a rain break.

Captain George Bailey and Hussey then provide the final surge as the hosts went past 170.