Suresh Raina slammed 84 and MS Dhoni 78 not out to propel India to 280 for five against England in their fourth One-Day International at Lord s. 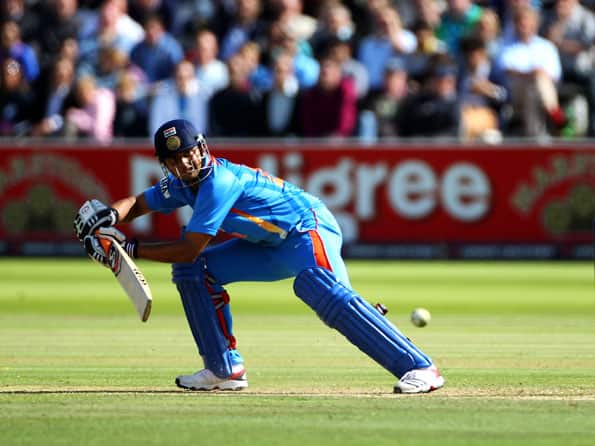 Suresh Raina in action during the fourth ODI Getty Images

Suresh Raina smashed 84 and MS Dhoni 78 not out to propel India to 280 for five against England in their fourth One-Day International at Lord s.

Dhoni and Raina added a record 169 runs for the fifth wicket for India after Graeme Swann jolted them in his opening over dismissing Rahul Dravid and Virat Kohli.

Raina smashed seven boundaries and two sixes for his 84 off 75 balls. Skipper Dhoni too showed aggressive intent at the end and hit six boundaries and three sixes in his 78 off 71 balls.

Parthiv Patel and Ajinkya Rahane made a cautious start and didn t give England bowlers any chance to capitalize at the start. They added 65 runs for the first wicket.

Stuart Broad provided England the first breakthrough when he trapped Rahane in front of the wickets for 38. Broad then struck again to remove Parthiv, who made 27 off 32 balls with the help of five boundaries and a six, on a short ball caught by Ravi Bopara.