Catch live updates of the second Under 19 ODI between India and Sri Lanka here.

Hello and welcome to CricketCountry‘s live coverage of the second match of the triangular under-19 series in Sri Lanka which also features India and England. The second match will be played between India and hosts Sri Lanka at R Premadasa Stadium, Colombo. India will be captained by the 19-year-old Ricky Bhui while Sri Lanka will be led by 18-year-old Charith Asalanka. It shall be interesting to see the final 11 players who will get to play in this match. Sri Lanka, being the home team certainly have the advantage going into the match. Everyone is aware that Sri Lankans are hard to beat in home conditions. However, considering the way India decimated England in the last match, Sri Lanka cannot take the Indians lightly.

LIVE CRICKET SCORE: SL-U19 250/5  | Overs 47| Target 285 | BATTING: Kamindu Mendis 15(20), Kasun Randika 0(1): De Silva gets out after run a ball 27. The fifth wicket partnership between him and Kamindu Mendis fetched the Lankans 34 runs. Kasun Randika has come to the middle. India are favourites to win from here on however they win three overs earlier due to duckworth-lewis-stern method by four runs. The match was close and could have gone either side. Lankans gave a tough fight.  OUT! Wanidu Hasaranga de Silva c Ishan Kishan b Kanishk Seth 27(27)

LIVE CRICKET SCORE: SL-U19 238/4  | Overs 44.4| Target 285 | Need 47 |  BATTING: Wanidu Hasaranga de Silva 22(21), Kamindu Mendis 10(13): De Silva whacks a boundary off Mahipal Lomror but neither he nor Mendis is able to repeat the feat in the next two overs. A lot of singles and doubles are scored in the last four overs. Sri Lanka requires 47 runs to win from here on. India needs wickets now or else they might lose the match. Sri Lanka is finding it easy to rotate the strike.

LIVE CRICKET SCORE: SL-U19 215/4  | Overs 40.2| Target 285 | Need 70 |  BATTING: Wanidu Hasaranga 8(7), Kamindu Mendis 1(1): Sri Lanka lose their fourth wicket in the form of their skipper Charith Asalanka. He was cleaned up by Rahul Batham for a well made 74. Kamindu Mendis who came next got off the mark on the first ball he faced. Lankans now require 70 runs off 58 balls. Match has got very interesting; any team can win at the moment.  OUT! Charith Asalanka b Rahul Batham 74(86)

LIVE CRICKET SCORE: SL-U19 206/3  | Overs 39| Target 285 | Need 79 |  BATTING: Charith Asalanka 73(82), Wanidu Hasaranga 1(4): Shammu Ashan is trapped by Zeeshan Ansari for 23. Wanidu Hasaranga has arrived at the crease after the dismissal of Ashan. Charith Asalanka is batting at the other end in his 70s. Match has reached its climax. Sri Lanka requires 79 runs from here on in 66 balls with seven wickets in hand. OUT! Shammu Ashan lbw Zeeshan Ansari 23(27)

LIVE CRICKET SCORE: SL-U19 166/2  | Overs 32| Target 285 | Need 119 |  BATTING: Charith Asalanka 52(65), Shammu Ashan 10(7): Finally, India break the second wicket partnership; it was worth 94 runs. Avishka Fernando is unlucky to get run out just at the moment he was thinking to change gear. Shammu Ashan has cone to the middle after his departure. OUT! Avishka Fernando run out (subst.) Amolpreet Singh 75(89)

LIVE CRICKET SCORE: SL-U19 153/1  | Overs 30| Target 285 | Need 132 |  BATTING: Avishka Fernando 74(87), Charith Asalanka 50(61): Five singles taken in the 29th over of the innings bowled by offbreak bowler Washington Sundar. Charith Asalanka slams a ball of medium pace bowler Shubham Mavi for a four in the 30th over. Sri Lankans now need 132 runs to win this match while only 20 overs are remaining. Aslanka has struck five boundaries en route his half century.

LIVE CRICKET SCORE: SL-U19 139/1  | Overs 28 | Target 285 | Need 146 |  BATTING: Avishka Fernando 68(81), Charith Asalanka 42(55): Charith Asalanka slams a boundary off  Washington Sundar. This was the only boundary to have been hit in the last four overs. Rest of the runs are scored through rotation of strike. Charith Asalanka is about to reach his half century. Sri Lanka now needs 146 runs to win off 132 balls. They still have nine wickets in hand so the target is attainable.

LIVE CRICKET SCORE: SL-U19 118/1  | Overs 24 | Target 285 | Need 167 |  BATTING: Avishka Fernando 59(68), Charith Asalanka 31(44): Avishka Fernando completes his half century. Batting on 59, he has struck four boundaries so far. Skipper Charitha Asalanka is batting on 31 with the help of three shots towards the fence. Sri Lankans now require 167 runs to win off 156 balls with nine wickets remaining. Match can go either way from here on.

LIVE CRICKET SCORE: SL-U19 7/0  | Overs 2.4 | Target 285 | Need 266 |  BATTING: Avishka Fernando 4(6), Salindu Ushan Pereira 1(10): A brilliant first over by Kanishk Seth, just one run that too of a wide. Avishka Fernando slams a four on the first ball of the next over bowled by Shubham Mavi. The next five balls are dot deliveries. Seth is now bowling his second over; three dots, a wide and a single. Sri Lanka now require 278 runs to win.

LIVE CRICKET SCORE: IND-U19 284/7 | Overs 50 | BATTING: Rahul Batham 7(6), Shubham Mavi 0(0): India, who were looking solid to go past 300 have been restricted to 284 for the loss of seven wickets in their allotted 50 overs. Still it’s a good score and Sri Lanka will have to bat really very well if they wish to chase it down. For India, opener Washington Sundar scored 77 runs while middle-order batsman Amandeep Khare slammed a quick century. Medium-fast bowler Asitha Fernando picked three wickets. OUT! Ricky Bhui c Mendis b Asitha Fernando 3(5), OUT! Mahipal Lomror run out Randika 3(4), OUT! Kanishk Seth run out Randika & Asalanka 5(3)

LIVE CRICKET SCORE: IND-U19 271/4 | Overs 48 | BATTING: Ricky Bhui 3(4), Mahipal Lomror 2(3): Sri Lanka strike back by sending the two set batsmen to the dugout. Amandeep Khare reaches his century but is unfortunate to get run out soon after; he struck nine boundaries and a shot over the ropes in his knock. Virat Singh gets out after a quickfire 30. India captain Ricky Bhui is batting with Mahipal Lormor at the moment. OUT! Amandeep Khare run out 102(98), OUT! Virat Singh c Ashan b Asitha Fernando 30(23)

LIVE CRICKET SCORE: IND-U19 254/2 | Overs 46 | BATTING: Amandeep Khare 97(96), Virat Singh 23(19): A lot of singles and couples follow in the last three overs with once Amnadeep Khare hitting Ashan for a boundary. India have batted exceedingly well, particularly in the last 5 overs which have fetched them 40 runs. Khare is just three short of his century. Virat Singh is giving him good support at the other end. India will be aiming to go beyond 300.

LIVE CRICKET SCORE: IND-U19 231/2 | Overs 43 | BATTING: Amandeep Khare 82(84), Virat Singh 15(13): Amandeep Khare carts the ball over the ropes off the bowling of offbreak bowler and Sri Lanka skipper Charith Asalanka. He then hits a boundary on Ashan’s bowling. A couple of singles and doubles follow in the middle. Amandeep is now approaching his century. He is batting on 82 having faced only 84 ball.

LIVE CRICKET SCORE: IND-U19 209/2 | Overs 41 | BATTING: Amandeep Khare 65(77), Virat Singh 10(8): India have crossed the 200-run mark. Even though they have lost a wicket, India continue to bat at a fast pace. Last five overs have fetched India runs at a rate of above 6.5 runs per over. Amandeep Khare is batting pretty well on 65 having faced only 77 deliveries. Match has got interesting and has entered its climax.

LIVE CRICKET SCORE: IND-U19 100/1 | Overs 23 | BATTING: Washington Sundar 36(73), Amandeep Khare 14(17): Amandeep Khare carts two boundaries— one off Asalanka and then follows it up with on Damaitha Silva. India have reached three figures in 23 overs. They have wickets in hand but they need to up the tempo.  Washington Sundar is batting at a strike rate of just a whisker below 50; he needs to bat more freely now after having got his eye in. Sundar has hit only one boundary so far.

LIVE CRICKET SCORE: IND-U19 79/1 | Overs 19 | BATTING: Washington Sundar 30(63), Amandeep Khare 1(3): Sri Lanka draw first blood but India is still in a good position. After 19 overs India are 79 for the loss of one wicket. Ishan Kishan was caught by substitute fielder NL Fernando off the bowling of Asitha Fernando. Amandeep Khare has come to the middle. OUT! Ishan Kishan c NL Fernando (subs.) b Asitha Fernando 33(48)

LIVE CRICKET SCORE: IND-U19 69/0 | Overs 16.3 | BATTING: Washington Sundar 24(55), Ishan Kishan 30(44):  Indian batsmen changes gear. Washington Sundar hits a four off the bowling of Samarakoon. Ishan Kishan joins the party and carts Ashan for a boundary in the next over. He slams Samarakoon for a six on the third ball of the 17th over. Sri Lanka desperately needs a wicket now.

LIVE CRICKET SCORE: IND-U19 33/0 | Overs 10 | BATTING: Washington Sundar 9(32), Ishan Kishan 11(28): It has been a slow and steady start by India. Openers— Washington Sundar and Ishan Kishan are batting sensibly and with discipline. Medium-fats bowlers Asitha Fernando and Lahiru Kumara are bowling at the moment.

Toss: India Under 19 won the toss and decided to bat first

Yesterday’s match between India and England (which was cut short due to rains) was comprehensively won by the former by 86 runs (as per duckworth-lewis-stern method). India were asked to bat first by England captain Brad Taylor. India, riding on Sarfaraz Khan and Anmolpreet Singh’s half centuries gave a target of 255 to the opposition in 34 overs as number of overs were reduced to accommodate for the time lost due to rains. India batted at an impeccable run rate of 7.47 and scored 254 for the loss of seven wickets in their innings. England’s medium-fast bowler Ben Green picked three wickets. In reply, England could only score 159 for the loss of nine wickets in 29 overs. India won the match by D/L/S method. India’s legbreak googly bowler Mahipal Lomror picked four wickets. India gained five points for their thumping victory while England got none. 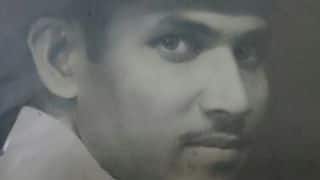 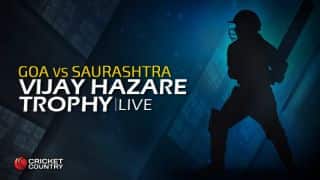