Catch live updates of the third Test between India and Sri Lanka here.

Welcome to CricketCountry’s live coverage of the third and final Test between India and Sri Lanka at SSC, Colombo. I am Abhishek Mukherjee, and I will help provide live scores and updates from this match, the first of the post-Sangakkara era. India have dominated the series so far, with a complete display at the P Sara Oval, Kumar Sangakkara’s last Test, making up for the dramatic loss in the first Test in Galle. India had let go of their hold on that first Test; when it looked as if they may complete an innings victory, Dinesh Chandimal scored a counterattacking century and gave India an iffy target on the last day to chase. A flurry of wickets later, India lost by 63 runs, as left-arm spinner Rangana Herath took seven wickets. Catch live cricket scorecard and ball-by-ball updates of India vs Sri Lanka, 3rd Test, Colombo

It’s stumps, on Day One. There will be early starts for the next four days, to try make up for lost time.

Early tea has also been taken, and due to the heavily wet outfield, prospect of play looks bleak today.

News from SSC is that play is at least an hour away, even if the rain has more or less stopped, because the umpires reckon it will take at least that much time to remove the water that has filled in.

Live Cricket Score: India 50/2 | Overs 15: Heavy clouds prompted the groundsmen to run in to cover the strip and the ground, in anticipation of a big shower. In the process of completing the covering of the ground, the rain began pouring heavily. Early lunch has been taken. This was after the first over of spin in the game, by Rangana Herath. Kohli scores an unconvincing boundary through fine leg. Batting: Pujara 19 (42), Kohli 14 (34)

Live Cricket Score: India 44/2 | Overs 14: After watching a seaming delivery, moving away, that surprises, Pujara steered the next delivery outside off to the gap between point and gully for two. He seems to be getting more confident with more time at the crease. He steers another ball to the same direction in the same over for a single. After another quickly run single from Pujara, Kohli attempts a drive away from the body, edges the ball but the ball just falls short of first slip. Batting: Pujara 18 (39), Kohli 9 (31)

Live Cricket Score: India 40/2 | Overs 12: The batsmen have defended Mathews and Pradeep. There is no other run besides a quickly run single when Pujara defended a ball that trickled to the close-in fielder square of the wicket. Batting: Pujara 14 (31), Kohli 9 (27)

Live Cricket Score: India 39/2 | Overs 10: Close! Pujara plays Pradeep’s delivery awkwardly, seemingly surprised by the bounce of a good length ball outside off, and edged to third slip. But the ball fell short of the fielder. Angelo Mathews introduces himself in the seventh over, and his first ball is flicked off Pujara’s legs to the square leg boundary. The eighth over is an eventful one, as Kohli inside edges a ball to the wicketkeeper Kusal Perera, but Perera spills the chance. The balls trickles on to the helmet, and as a result India gain five runs. Kohli, off the last ball of that over, is surprised by the extra bounce. Pujara scores his first boundary in the 10th over, with a drive through extra cover that seemed not perfectly timed. Batting: Pujara 13 (30), Kohli 9 (16)

Live Cricket Score: India 19/2 | Overs 5: OUT! Ajinkya Rahane falls over trying to negotiate a full delivery coming into his pads, and is given out leg before wicket. Two attractive boundaries is Rahane’s contribution before going back to the pavilion. Virat Kohli, the No. 4, has come in to bat, defended positively and played an attractive square drive. Batting: Pujara 4 (10), Kohli 4 (6)

Live Cricket Score: India 13/1 | Overs 3: India have lost their first wicket in the first over. KL Rahul prepared himself for a leave off a back-of-a-length delivery outside off stump, but the ball didn’t go straight, shaping in to strike the off stump. Ajinkya Rahane, the No. 3, gently pushes at an overpitched delivery, and gets a boundary through mid-off. He has hit another boundary, a straight drive off the same bowler Dhammika Prasad, in the third over. Batting: Rahane 8 (11), Pujara 2 (6)

Sri Lanka have won the toss and will bowl. Naman Ojha makes his Test debut, and Cheteshwar Pujara has been chosen to replace Murali Vijay as opener. Kusal Perera makes his debut for Sri Lanka.

While spin is likely to be the major weapon at the SSC pitch as well, there is grass on the pitch, in an anomaly from the usual SSC pitch that encourages a run glut. The venue has seen a lot of drawn Tests due to the docile nature of the pitch, but the situation is changing, with a relaid track. The last time a Test was held here, a year ago, Sri Lanka defeated Pakistan by 105 runs and bid farewell to Mahela Jayawardene playing his last Test. India are playing their seventh Test here. 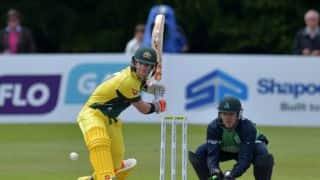 Australia vs Ireland 2015: Steven Smith happy with win ahead of crucial T20I, ODI series vs England