Hello and welcome to our live coverage of Day 3 of the first Test between India and West Indies at Antigua on Saturday.

Ishant Sharma completed his ninth five-wicket haul while Mohammed Shami, Jasprit Bumrah and Ravindra Jadeja scalped a wicket each as India left West Indiesreeling at 189/8 on day two of the first Test at the Sir Vivian Richards Stadium, North Sound in Antigua on Friday.

At stumps, Jason Holder and Miguel Cummins were batting on 19 and 0 respectively. India, who were all out for 297, are currently leading West Indies by 108 runs.

John Campbell was on a roll as West Indies were off to a flying start but Shami’s introduction into the attack gave India their first breakthrough as the Indian pacer dismissed Campbell after the West Indian dragged one back onto the stumps.

After conceding some easy runs at the start, Indian pacers pulled back the things to stem the flow of runs.

Ishant then struck for the first time in this match as he held on to a fine return catch on his own bowling to end Kraigg Brathwaite’s innings. The right-hander got out for 14.

Jadeja, who had scored 58 to take India to 297, added to the hometeam’s woes as he dismissed Shamarh Brooks before the tea break. The debutante perished for 11 as Ajinkya Rahane took a catch on the rebound, after the ball ricocheted off Rishabh Pant’s pads.

Bumrah trapped Darren Bravo before the wicket to give India their first breakthrough in the second session before Ishant ran through the West Indies batting line-up.

While Shai Hope and Shimron Hetmyer were looking to rebuild West Indies’ innings, Ishant dismissed Hope, Hetmyer and Kemar Roach in space of five runs as West Indies were reduced to 179/8 from 174/5. 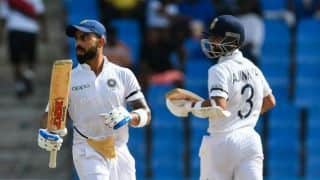 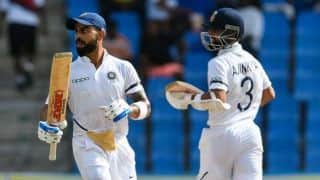