The last practice game between Indians and CA XI ended in a draw.

Indians 99/2 | Overs 29
M Vijay 39 (81), V Kohli 30 (56)
End of the play at Glenelg as India recover well after losing a couple of wickets early on. The Indians would aim to bat all day tomorrow to get enough practise. Fine performance by Virat Kohli and Murali Vijay, and even Cheteshwar Pujara. Shikhar Dhawan would be disappointed to have missed out on opportunity.
Indians 82/2 | Overs 25
M Vijay 33 (67), V Kohli 22 (41)
Indians continue to score freely as captain Virat Kohli and Murali Vijay are batting comfortably at the crease now. These two would be aiming to carry on till the end of the day’s play.
Indians 53/2 | Overs 19
M Vijay 14(49), V Kohli 11(25)
The Indians have gone about their job nicely since Pujara’s wicket. Kohli and Vijay batting well. David Moody and Evan Gulbis bowling in tandem. Kohli and Vijay will want to see India through till the end of the day after a couple of early wickets.
Indians 36/2 | Overs 12
M Vijay 8(31), V Kohli 0(1)
AND HE’S GONE! Lalor takes another! Big wicket, Pujara was batting really well. He was looking aggressive and was batting positively. But he will need to go back to the drawing board ahead of the first Test match.
OUT! C Pujara 22(41) c Turner b Lalor
Indians 32/1 | Overs 10
M Vijay 8(26), C Pujara 18(36)
Good bowling so far. Lalor and Rainbird aren’t giving the Indians much. Vijay has looked patient as usual, and Pujara has been the aggressor, though not by much. Evan Gulbis continues.
Indians 6/1 | Overs 4
M Vijay 3(14), C Pujara 2(10)
Out walk the Indian openers, Murali Vijay and Shikhar Dhawan. Sam Rainbird and Josh Lalor to open the bowling. AND LALOR STRIKES! Shikhar Dhawan departs for a golden duck. Bad omens for the Indian opener, this is his second successive failure.
OUT! S Dhawan 0(1) c Pattison b Lalor
Cricket Australia XI 243 | Overs 68.3
S Gotch 58(119)
JONTE is GONTE (excuse the pun)! Karn Sharma picks up his third wicket. Looks like Gotch is going to be stranded fifty! Varun Aaron into the attack. AND HE WRAPS IT ALL UP! Sam Rainbird departs for four, and Cricket Australia XI are bowled out for 243.
OUT! J Pattison 16(45) c Umesh b Karn, S Rainbird 4(4) c Raina b Aaron
Cricket Australia XI 226/8 | Overs 66
S Gotch 48(115), J Pattison 13(40)
Final session of the day coming up now, but its likely to be a long one, perhaps around 35 overs. Jadeja and Umesh start proceedings after Tea. Gotch batting well, and Pattison seems confident.
Cricket Australia XI 205/8 | Overs 59
S Gotch 40(101), J Pattison 0(10)
Ishant Shamra and Mohammed Shami continue as Tea beckons. Gotch has batted really well, and Lalor has looked secure, but the Indians have bowled beautifully so far and haven’t allowed them to settle. RAVINDRA JADEJA GETS HIS MAN! Josh Lalor’s brave innings comes to an end! Jonte Pattison comes in. At Tea, CA XI are 205 for eight.
OUT! J Lalor 21(31) c Shami b Jadeja
Cricket Australia XI 171/7 | Overs 46
S Gotch 24(58), J Lalor 4(6)
BOWLED HIM! Varun Aaron has been in scorching form of late, and Evan Gulbis has to walk back for just one. Josh Lalor is the new man in. Sebastian Gotch still out there, but the wickets are tumbling at the moment.
OUT! E Gulbis 1(7) b Aaron
Cricket Australia XI 159/6 | Overs 43
S Gotch 16(52), E Gulbis 1(1)
AND KARN STRIKES AGAIN! After a good partnership, CA XI have lost their sixth. Doran is the man dismissed for a confident 25 off 42 balls as Virat Kohli takes the catch. Indians once again break a threatening partnership.
OUT! J Doran 25(42) c Kohli b Karn
Cricket Australia XI 143/5 | Overs 39
J Doran 14(31), S Gotch 14(43)
Doran and Gotch keep fighting in the middle. Umesh Yadav and Mohammed Shami are bowling at the moment. CA XI have managed not to lose any more wickets for over 10 overs now. But they haven’t scored too many runs either.
Cricket Australia XI 127/5 | Overs 33
J Doran 7(18), S Gotch 8(20)
Karn and Ishant bowling in tandem. Karn has been very expensive, he is going at over 5.6 runs an over! Varun Aaron now comes back on. Ishant has been by far the most economical bowler on display. Doran and Gotch need to buckle down here, there isn’t a whole lot of batting to come after this.
Cricket Australia XI 111/5 | Overs 28
J Doran 0(4), S Gotch 0(3)
AND AARON STRIKES AFTER LUNCH! Jordan Silk, who was batting so well, offers Suresh Raina a catch. CA XI lose their fourth. In walks Doran. Shami and Aaron have taken two wickets apiece. Karn Sharma continues. AND HE GETS HIS MAN! Pujara takes the catch, and CA XI slip further!
OUT! J Silk 58(104) c Raina b Aaron, A Keath 19(43) c Pujara b Karn

Cricket Australia XI 101/3 | Overs 25
J Silk 55 (99), AR Keath 12 (37)
Silk reaches his half-century! What a wonderful knock under adverse conditions by him. Keith has been steady on the other end, and both batsman are just beginning to cause problems for India captain Virat Kohli. And that’s Lunch.
Cricket Australia XI 91/3 | Overs 22
J Silk 46, AR Keath 11
Both these batsman have managed to do some recovery for the hosts. Karn Sharma intorduced into the attack and served some treatment. Silk is approaching his half century.
Cricket Australia XI 44/3 | Overs 11
J Silk 10, AR Keath 2
Another one bites the dust! Shami picks up his second. Team India have made a roaring start to this match. MW Short gives a catch to Wriddhiman Saha who makes no mistake.
OUT! MW Short c Saha b Shami 19 (15)
Cricket Australia XI 25/2 | Overs 5
J Silk 3, M Short 10
Indian bowlers have started this match wonderfully! First Shami takes the wicket of R Carters, and then Varun Aaron dismisses AJ Turner. CA XI batsman appearing clueless.
OUT! R Carters c Dhawan b Shami 1 (3), A Turner b Aaron 0 (3)

Hello and welcome to CricketCountry’s coverage of Day One of the second tour match between India and Cricket Australia XI at Adelaide. We will be bringing you the live updates of the match.

After a series of disheartening events, India will finally get another practice game before the first Test starts at Adelaide Oval from December 9.  The last practice game between Indians and CA XI, which was played at Gliderol Stadium in Adelaide, ended in a draw. After a gap of almost 10 days between the two warm-up games, India would look to push in all the resources one last time before the big tour commences in Adelaide.

Virat Kohli will lead the team once again in absence of MS Dhoni, who is scheduled to arrive in Adelaide on Friday. Kohli came good with the bat in the white uniform after a sour England tour, as he scored a brisk 60. Other than Kohli, three other Indian batsmen scripted their half-centuries. Ajinkya Rahane and Rohit Sharma, who came out to bat at No. 5 and 6 respectively, were dismissed cheaply. It would be another opportunity for both of them to present a case for berth in the Test team. 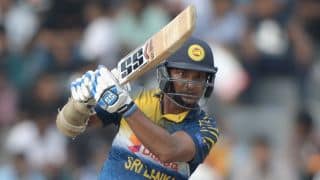 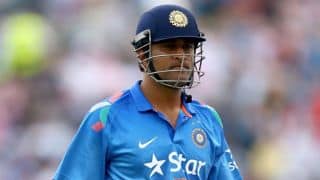