Ireland can cap off the tournament as the best placed team with a win vs Scotland.

.
Catch the live scorecard and ball-by-ball commentary of the match here

(Can Ireland finish the Dubai Triangular series on a high with a win over Scotland? Catch the live cricket scores here)

The sixth and final ODI between Ireland and Scotland has been abandoned without a ball being bowled due to continuous rains throughout the day. Ireland therefore win the tri-series, which will give them a major boost ahead of the ICC world Cup 2015. Afghanistan, who won two games, finish as runners-up.

With less than five minutes to go, the covers are back on in Dubai and it is highly unlikely that the match will begin.

Covers are back on and it seems like we are going to lose more overs at Dubai.

Scotland have an unchanged side from their victory over Afghanistan. The game has been reduced to 27 overs a side after rain has interrupted the start of play. The match will start at 14.30 IST. Scotland will bat first after Ireland had won the toss and elected to field.

The match has been reduced to 36 overs a side, but looks like there will be further loss of overs since the rains have yet again stopped play from commencing.

There’s some good news coming in from Dubai. Ireland have won the toss and elected to field first. But rains has again played it’s part and stopped the play from starting.

The umpires will have an inspection at 1.30 pm IST to see if the conditions are alright for the match to start. There might be loss of some overs as well.  The toss is still awaited.

Heavy rains at Dubai at the moment and doesn’t show signs of slowing down. Doesn’t look too good at the moment.

Bad weather could delay the start of play. But the groundsmen at Dubai are trying their best to clear the wet surface and start the game as soon as possible. As a result the toss has been delayed.

Ireland and Scotland lock horns in the last One-Day International (ODI) of what’s been a fascinating Dubai Triangular series also involving Afghanistan. The Irish are coming of a heavy loss to Afghanistan in the previous ODI, so they’d be keen to redeem themselves. They have further been dealt a body blow losing pacer Tim Murtagh before the World Cup due to injury. Murtagh suffered a fracture to his foot. However this final match against Scotland  whom they had beaten in their previous encounter offers them an opportunity to cap off the tournament on a high and finish as the best placed team with three wins from four matches. William Porterfield’s parched run of form remains a worry for the Irish in run up to the ICC World Cup 2015.

Scotland on the other hand have had mixed run in the triangular series thus far, losing two and winning just a solitary match against Afghanistan. They’d be keen to turn the tables on the Irish whom they had lost to in the previous encounter. They will take a lot of heart from their performance against Afghanistan in the previous match though. Their only win of the tournament was the highest winning margin for any side in the five matches thus far. They skittled Afghanistan out of a mere 63 in defense of 213 they had scored. Pacer Josh Davey starred with the ball for Scotland with career best figures of six for 28.

Game abandoned as a no result unfortunately. Ireland are the Tri-Series winners.

Predictably with 4 minutes to start time the covers are back on!

Covers back on again @ICCAcademy – rain lingering but hopefully of play soon! http://t.co/z4LvIhPB2Z

News from Dubai is that play will get underway at 9am GMT – 27 overs per side and Ireland will bowl first. http://t.co/z4LvIhPB2Z

Scotland named an unchanged side from the victory over Afghanistan before the toss.

The rain is back at the @ICCAcademy unfortunately, more news on reduction of overs and start times for Scotland’s innings when we have it.

The lost time this morning means the game was scheduled to be a 36 over match although we may now lose more overs with the rain returning.

Ireland have won the toss and chose to field first…but it has started to rain again, so we won’t be starting yet #IREvSCO

Been very wet in Dubai, still waiting for confirmation of a start time as the groundstaff work hard to get things ready.

Hammer blow to miss a WC with broken foot but thats the way it goes in sport i guess. Best of luck to the boys and will be watching #coybig

Hello and welcome to CricketCountry’s coverage of the sixth ODI between Ireland and Scotland here at ICC Global Cricket Academy, Dubai on Monday. Catch the Live updates of the match here. 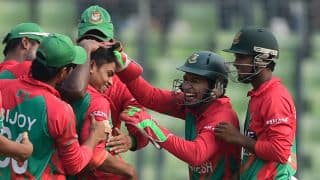 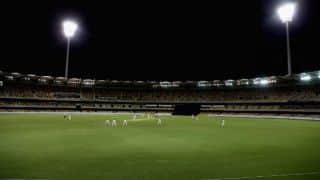