Catch the Live Score of the 3rd ODI between Scotland and Ireland here.

Ireland and Scotland will play the third and final One-day International (ODI) at The Village in Dublin. The hosts have already won the series with two straight victories in the first two games. They would like to continue their domination in the third match as well. On the other hand Scotland would like to finish the tour on a high note by winning the last game. Catch Live Blog of the match here

This series was scheduled to help the two European teams prepare for the ICC World Cup 2015.  As expected, Ireland — the top associate nation at this moment — dominated the series.  In the first ODI Ireland cruised to a comfortable seven wicket victory with 80 balls to spare. The Irish skipper, Kevin O’Brien, showed his class and composure and led his side from the front. In the second game Scotland showed some fight, but eventually Ireland managed to hold their nerve and took the game by three wickets. Catch Live Scorecard of the 3rd ODI between Ireland and Scotland here 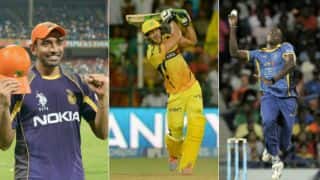