Catch all the live updates of Match 2 of Pakistan Cricket Cup 2016 between Islamabad and Khyber Pakhtunkhwa at CricketCountry.

Hello and welcome to CricketCoutnry’s live blog coverage of Match 2 of the Pakistan Cricket Cup 2016, between Islamabad and Khyber Pakhtunkhwa. The match is being played at Faisalabad. The Pakistan Cup 2016 is a new one-day tournament that will be held among five teams: Sindh, Punjab, Khyber Pakhtunkhwa, Balochistan, and Islamabad. Younis Khan (Khyber Pankhtunkhwa) and Misbah-ul-Haq (Islamabad) are the captains. Each team will play 4 matches apiece, with the top two qualifying for the final. The tournament will end on May 1, and will aim to boost young Pakistan talent by giving them the chance to play alongside senior international players. All the games would be played at the Iqbal Stadium in Faisalabad. READ: Pakistan Cricket Cup 2016 schedule: Match time table with ground details

Live Cricket Score Islamabad 205-8 | Overs 43| BATTING: Shadab Khan  33(29), Mohammad Abbas 0(0): Islamabad have won by 2 wickets! With 2 needed off the last over, Fahim Ashraf bowls a full length ball to Shadab Khan and he hits it for six. He played a superb cameo for his side when things not nervy and the pressure was on him. Splendid knock this! Mohammad Sami was out in the previous over caught and bowled by Mohammad Asghar.

Live Cricket Score Islamabad 189-7 | Overs 41| BATTING: Shadab Khan  21(24), Mohammad Sami 8(6): Oh boy! Amazing turn of events. Khyber sense a chance here as Misbah is run-out, perhaps the only way he could have got out. He played superbly for his 82 off 104 balls. He held one end and now it could get nervy for Islamabad. Earlier Hammad Azam was stumped for 17 runs off Zohaib Khan. Islamabad need 12 runs in 2 overs as the match was reduced to 43 overs due to the delay and the target was revised to 201 runs. Mohammad Sami and Shadab Khan are at the crease.

Live Cricket Score Islamabad 142-5 | Overs 32 | BATTING: Misbah-ul-Haq  71(89), Hammad Azam 13(16): This match has seen a twist here. With two wickets of two balls Khyber have come back in some fashion into the game. First Iftikhar Ahmed was caught by Ahmed Shehzad off Zohaib Khan’s bowling and the very next ball Imran Khalid was bowled. Misbah and Hammad Azam have although not panicked. Misbah has stayed as calm as always and Hammad has hit one six too. The match could well turn on its head if Khyber can manage to get Misbah’s wicket.

Live Cricket Score Islamabad 72-3 | Overs 25 | BATTING: Misbah-ul-Haq  55(65), Iftikhar Ahmed 48 (66): Misbah-ul-haq and Iftikhar are playing superbly. Without taking any risks they are steering the ship in fine fashion. Iftikhar Ahmed is batting well with his skipper. Misbah also notched up his fifty. They crossed the 100-run mark in the 24th over. Khyber need to take wickets soon as both the batsmen are looking very comfortable in the middle. They are scoring at more than 4.50 runs per over and Iftikhar Ahmed is also nearing his half-century.

Live Cricket Score Islamabad 72-3 | Overs 17 | BATTING: Misbah-ul-Haq  41(49), Iftikhar Ahmed 22 (34): Islamabad are playing sensibly here. They are rotating the strike more and both Iftikhar and Misbah are controlling the chase pretty well. They know they need to stay their at the crease and they’re doing just that. Misbah has looked the more aggressive one. He has hit one six as well.He hit 3 boundaries in the 17th over bowled by Yasir Shah. He started slowly but is now looking in full flow.

Live Cricket Score Islamabad 24-3 | Overs 8 | BATTING: Misbah-ul-Haq  5 (14), Iftikhar Ahmed 10 (15): Islamabad were off to a poor start in their run-chase as they lost the wicket of Kamran Akmal in the 2nd over itself. He was sent back to the pavilion by Zia-ul-Haq, caught by Fahim Ashraf. The very next over Sharjeel Khan was out as he was caught by Yasir Shah off the bowling of Fahim Ashraf. Nasir Jamshed and Iftikhar Ahmed then tried to put in a partnership. But matters soon got worse as Nasir was picked up by Zia-ul-Haq. Misbah-ul-Haq then came out to bat.

The power of one light tower has gone off and therefore there is a delay in the start of the 2nd innings.

Live Cricket Score Khyber Pakhtunkhwa 212 | Overs 46.1 | BATTING: Sameen Gul 1 (19): And that ends the innings of Khyber and they have gone past 200 comfortably though they struggled with the bat. Mohammad Abbas also shone for Islamabad scalping two wickets while Mohammad Sami grabbed one towards the death overs. Hammad Azam was the next to recall with his splendid 3 for 23 at the end of 7 overs and providing the base for Islamanbad. As for batsmen it was Fakhar Zanam and Younis Khan standing tall for Khyber while Mohammas Asghar and Zia-ul-Haq also remained prominent with his innings. Islamabad has to achieve 213 now in 50 overs.

Live Cricket Score Khyber Pakhtunkhwa 180/7 | Overs 38 | BATTING: Yasir Shah 2 (10), Zia-ul-Haq 3 (8): Islamabad have bounced back from their inning and have got 5 more wickets on their hand and new batsmen playing are Yasir Shah and Zia-ul-Haq. Looks like Islamabad are successful in restricting their opponent. Yet Khyber are reaching the 200 mark. The skipper played his part and scored half-century giving the impetus to his team. But the rest of the batsman failed to live upto the team’s expectation as the wickets kept tumbling and batsmen managed to score just single digit score. Hammad Azam has been the star for Islamabad picking three wickets for this team.

Live Cricket Score Khyber Pakhtunkhwa 118/2 | Overs 24 | BATTING: Younis Khan 30 (39), Rameez Aziz 4 (8): Islamabad have been successful in getting the opening pair out too soon. It was Ahmed Shehzad who had to make the way out followed by Fakhar Zaman. The skipper, Younis Khan comes in and the batsman along with him is Rameez Aziz. Younis is already 30 now. But the Islamabad bowlers are doing their part and restricting the opponent well. Fakhar was out for 45 missing chance of half-century while Ahmed was gone for 31. Both acquired 50 runs stand successfully.

Live Cricket Score Khyber Pakhtunkhwa 42/0 | Overs 10 | BATTING: Ahmed Shehzad 25 (32), Fakhar Zaman 15 (28): Shehzad and Zaman are moving strongly with no mistake. Though they are managing with ones and twos, but they are building strong partnership with no mistakes. First 10 overs are done and Islamabad bowlers are coming up with perfect length and bounce to restrict the opening pair and get a wicket soon. Mohammad Abba, Mohammad Sami and Mohammad Irfan have exchanged their spells.

Live Cricket Score Khyber Pakhtunkhwa 25/0 | Overs 5 | BATTING: Ahmed Shehzad 15 (22), Fakhar Zaman 9 (8): Mohammad Irfan started the attack for Islamabad. As for KPAK it was Ahmed Shehzad and Fakhar Zaman who have started the innings. Irfan received the perfect start with just 1 run from the first over. But it was Ahmed Shehzad flicking away for boundaries from the next over deep mid wicket or fine leg. Fakhar joins along with Ahmed Shehzad with excellent timing with his boundaries and driving it through deep square leg. Irfan comes for 5th over and has conceded just one run yet. Irfan is delivering perfect length and bounce with Shehzad finding it difficult to get hold of the the right gap and shot. Finally Shehzad finds the gap over point and finds the boundary.

Younis Khan, recently who retired from one-day international cricket is back to cricket field and is captaining Khyber Pankhtunkhwa while Pakistan former captain Misbah-ul-Haq is leading Islamabad. Both these captains have played together for their national side and have recently retired from ODI cricket. It will be interesting to see the clash of former players. Islamabad also consists of current Pakistan players Mohammad Irfan and Sharjeel Khan, including ex player Kamran Akmal, who will be keeping for Islamabad. 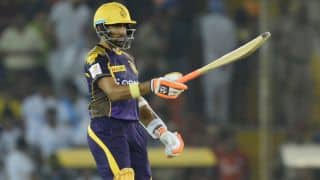 Robin Uthappa: KKR's success in IPL is due to maintaining strong core