Catch live action of Jammu and Kashmir vs Goa, Round 7 match here.

Hello and welcome to live coverage of Day two of the Ranji Trophy 2015-16, Group B match between Jammu and Kashmir and Goa at the Gandhi Memorial Science College Ground in Jammu. Jammu and Kashmir won the toss and elected to field and at stumps of the opening day, the visitors were at 263 for one in 90 overs with Swapnil A Asnodkar and Sagun Kamat batting on 74(151) and 57(165) respectively. The lone wicket was taken by Jammu and Kashmir’s most trusted player, Parvez Rasool. He trapped Goa’s opening batsman Amogh Desai leg before wicket on the third delivery of the 79th over. RANJI TROPHY 2015-16: FULL COVERAGE HERE

LIVE CRICKET SCORE: J&K 43/2, Pranav Gupta 25 (21), Ian Chauhan 13 (27) — STUMPS!!!! No harm done following the early loss of couple of wickets for J&K as they near the 50-run mark and will make sure they play a good game in the remaining couple of days in order to avoid an innings defeat.

LIVE CRICKET SCORE: J&K 14/2, Pranav Gupta 8 (7), Ian Chauhan 1 (9) — GONE!!!! J&K lose quick opening couple of wickets in the form of openers Shubham Khajuria and Abhinav Puri as Goa have declared their ninnings for a massive 552. Good chance for them to earn an innings win over J&K.

LIVE CRICKET SCORE: GOA 532/5, Keenan 3 (7), Snehal Kauthankar 1 (1) — Goa have gone past the 500-run mark and have also lost five wickets. A few more runs and it should be enough to declare for the innings.

LIVE CRICKET SCORE: GOA 289/1, Swapnil Asnodkar 95 (180), Sagun Kamat 62 (181) — Goa start right from where they stopped as the batsmen continue to bat comfortable, while Asnodkar inches towards his century, being just five runs short.

Amogh did his job with the bat before getting dismissed. He scored an excellent 106 from 228 deliveries he had faced. It will be crucial for Swapnil and Sagun to carry the same form in the second day to ensure Goa posts a competitive first innings total before the hosts take over the batting. Both the teams are currently placed sixth and seventh in the points table respectively. Goa are currently placed in the sixth spot as they have 15 points from seven games, along with a win and loss, each followed by five draws. Jammu and Kashmir, on the other hand, have played six games and have just eight points from a couple of losses and four draws, as they are in a desperate search for their opening win this season so far. 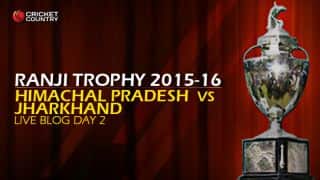