Catch the live cricket scores and updates from the 4th match of the Karnataka Premier League (KPL) 2015 between Hubli Tigers and Rockstars here.

Hello and welcome to the CricketCountry’s coverage of the fourth match of the Karnataka Premier League (KPL) 2015 between Hubli Tigers and Rock Stars. I am Amit Banerjee and I will be bringing you the updates from the third match of the tournament. The matches so far have seen the side chasing winning the games with the teams electing to bowl first after winning the toss often. Will the trend continue in the second game today between Hubli Tigers and Rock Stars? There is a huge crowd expected for the game with many filmstars and celebrities expected to making an appearance today. Who will come out on top? Catch the live cricket scores and updates here.

Live Cricket Score Rock Stars 122/6 | Overs 20 │Batting: Madan Mohan 31(25), Chandrashekar Raghu 20(21): And the Hubli Tigers get their first points of the tournament as they finish with a 32-run win over the Rock Stars. In the end, victory was easier than expected for the home side. Madan Mohan and Chandrashekar Raghu however, made the defeat less embarrassing after they were reduced to 67 for 6 at one stage, sharing a 55-run unbeaten stand for the seventh wicket to bat out till the last ball!

Live Cricket Score Rock Stars 80/6 | Overs 16 │Batting: Madan Mohan 10(10), Chandrashekhar Raghu 5(10): The Rock Stars are in all sorts of trouble here at the moment, having lost the wickets of Dhruv Sharma and Raju Gowda in the 13th over, before Teja was dismissed for a duck in the following over as the scoreboard read 67 for 6 from 65 for 3. It’s pretty much over for them now, unless the lower-order duo of Mohan and Raghu pull off a miracle. Need 75 to win from 24 overs. OUT! Dhruv Sharma c Nitin Bhille b D Negi 10(14), Raju Gowda b D Negi 0(1), Teja C Sreenath Aravind b Balachandra Naveen 0(4)

Live Cricket Score Rock Stars 65/3 | Overs 12 │Batting: Dhruv Sharma 10(13), Chandrashekhar Raghu 0(2): More trouble for the Rock Stars after Sunil Joshi falls, getting caught by Kunal Kapoor at deep square-leg while attempting to clear the boundary in that region, as the chasing team lose their third wicket, with the target of 155 slowly beginning to look stiffer than ever. Need 90 to win from 48 balls. OUT! Sunil Joshi c Kunal Kapoor b Chethan William 10(18)

Live Cricket Score Rock Stars 49/2 | Overs 8 │Batting: Sunil Joshi 4(8), Dhruv Sharma 1(1): Rajeev accelerates his side aggressively by smashing 17 runs in the fifth over, followed by a six in the following over. The Tigers however, manage to turn things around spectacularly in the 7th over when they dismiss both the in-form Rajeev as well as Raahul, who was virtually a mute spectator at the other end all this while. Need 106 to win from 72 balls. OUT! Rajeev lbw b D Negi 39(23), RK Raahul b D Negi 4(16)

Live Cricket Score Rock Stars 18/0 | Overs 4: Rajeev has been aggressive in Rockstars’ reply. Kranti Kumar has been hit for two fours, both through the off side, to make up for a sedate start. A tight single was attempted, and when the short midwicket fielder threw in the ball to the non strikers’ end, the batsman was way short. But a direct hit was needed. Batting: Raahul RK 2 (3), Bhille 15 (11)

Live Cricket Score Hubli Tigers 154/5 | Overs 20: 13 runs are taken off the penultimate over, via a four through point, a wide, and other urgently run runs to deep-set fielders. The batsmen are a bit awkward in attempting slogs to maximise their scores, and the 150 is brought up. There is a run out in the end as well, to dismiss Negi. Batting: Aravind 17 (13), Bhille 4 (2)

Live Cricket Score Hubli Tigers 134/4 | Overs 18: Joshi is milked for a single, before two runs are attempted off a ball hit to deep extra-cover, but the fired throw is collected by the keeper and wickets disturbed when the batsman was struggling to be back. The third umpire rules him not out, though, as he was just in. Raghu comes back to bowl off-spin, but this time, he has been deposited to deep midwicket for a six off a shot ball that was heaved. Off his fifth ball, Negi executes a short-arm, lofted smash through extra-cover for a four. Batting: Dikshanshu 11 (12), Aravind 9 (8)

Live Cricket Score Hubli Tigers 117/4 | Overs 16: Raghu fires in his slow offspinners and is played safely for a single off the first four balls. But Pawan, the half-centurion, slog sweeps him straight to the man at deep midwicket. Only a run is conceded in that over. Batting: Dikshanshu 3 (7), Aravind 0 (1)

Toss: Rock Stars have won the toss and have elected to bowl first. 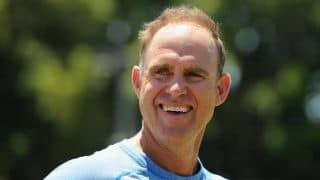