Catch all the live cricket scores and updates from the Mysuru Warriors vs Mangalore United game at Hubli.

Hello everyone and welcome to CricketCountry’s coverage of the fifth match of the Karnataka Premier League (KPL) 2015 at Hubli. I am Bhaskar Narayan and I will be bringing you the updates from the game. The encounter will be between the Mysuru Warriors and Mangalore United. With both these teams having already lost their first game in the tournament, they will wish to get back to winning ways before it gets too late. Mysuru Warrios led by Manish Pandey will hope to recover from their close loss to Namma Shivamogga. Mangalore United were beaten by Belagavi Panthers in the opening game of the tournament. Who will win today? Catch all the live cricket scores from the game here.

Live Cricket Score Mysuru Warriors 143/8 | Overs 20: Gautham CM is caught by Brar on More’s ball. Suneel comes to bat; he gets down the wicket and edges the ball to wicketkeeper. MW need 46 runs and they have just one wicket in hand. Shantharaju takes a quick single. Runs are not coming and it appears like MU have won the match already. However Mathias wants to fight till the end, he hits a four straight down the ground before getting bowled. Mangalore United win by 39 runs. Arjun’s brilliant knock goes in vain.

Live Cricket Score Mysuru Warriors 143/7 | Overs 16: Akshay C K fails to judge a ball by Mitrakanth and is bowled. Suchith plays a big shot and gets caught. Match has still not ended. Manjesh Reddy comes back (after he was retired hurt early in the match). Wickets don’t  deter Arjun to play big shots. He hits another four. Reddy is caught leg before trying to squeeze the ball towards the on side for a single. He fails to judge Mitrakanth Yadav’s googly. MW neeed 55 runs off 34 balls after 14.2 overs. Finally the big wicket, Arjun gets run out on 87. Krishnappa Gowtham gets lbw playing a defensive shot. It’s all over for MW. Batting Mathias 2 (4), Gautam 3 (4)

Live Cricket Score Mysuru Warriors 123/2 | Overs 12: Naveen hits Moinuddin down the ground for a six. He plays the same shot on the next ball but gets only a single. Arjun takes a cheeky single. Manjesh Reddy gets retired hurt. Karun Nair bowls the tenth over. Arjun places a ball through point for a four. Naveen is caught in the deep attempting a big shot, caught by Rohan Kadam. It is a brilliant catch. 108/2 after 10 overs. Arjun is batting on 70 on 41 odd balls. Warriors need 73 runs on 51 balls. MW are batting on 120/2, at this point MU were just 88. Batting: Arjun Hoysala 77 (45), Akshay C K 5 (6) Out! Naveen c Rohan Kadam b Nair

Live Cricket Score Mysuru Warriors 89/1 | Overs 8: Just seven runs scored in the fifth over. Mitrakanth Yadav comes to bowl the sixth over and is hit down the ground for a four on his first ball. Arjun hits two more fours making a hat-trick of fours. Looks like Arjun means business. He pulls the penultimate ball of Yadav’s over for six. Sixth over (4,4,4,0,6,1). Last two overs— 25 runs. Syed Moinuddin is handed the ball. Let’s see how the batsmen play his left-arm spin. Two singles of the first two balls. Arjun Hoysala scores his fifty of 30 balls. Hoysala has hit two sixes en route to his half-century. Arjun has a strike rate of 176.67 till his half-century. Reddy sweeps Moinuddin for a double. After seven overs MW are 75-1, looking solid. Reddy gets down the track and hits Patel for a four on the on side. Reddy goes for a sweep but gets only a double for it. Judging by Reddy’s temperament it appears he wants to hit every ball for a six or four. Arjun does it for him and hits a four. Batting: Arjun Hoysala 59(33), Manjesh Reddy 22(13)

Live Cricket Score Mysuru Warriors 36/1 | Overs 4: Hoysala plays a cover drive for four. Manish Pandey gets caught inside the circle trying to play a lofted shot. Manjesh Reddy comes to the middle. MW 7/1 in first over. Ronit is bowling quick but doesn’t has a correct line. Arjun Hoysala survives a run out chance. 22/1 after three overs, not the kind of start Warriors wanted. Spinner Udit Patel bowls the fourth over and is hit for a six down the ground on his second ball. Arjun joins the party and pulls a ball by Udit out of the park. Batting: Arjun Hoysala 22 (16), Manjesh Reddy 9 (6) OUT! Manish Pandey c Patel b Bhareth 1(2)

Live Cricket Score Mangalore United 124/3 | Overs 20: Bhavane is not able to pick Suchith’s line. Bhareth is dropped in the deep; he follows it up with a six down the ground. He then hits a four and six. 18th over is very expensive. MU in commanding position. Bhavane comes to the party and hits a sweetly timed cover drive for four. He then reverse sweeps a ball for four and is caught in the deep on the next ball. MU are aiming a big score. Bhareth is not able to capitalise on a free hit. However, he times the next ball for a six. MU end their innings at 191/4 Batting: Bhareth 46 (18), Udit Patel 0 (0) OUT! Shishir Bhavane c Akshay b Suchith 40 (32)

Live Cricket Score Mangalore United 124/3 | Overs 16: Batsmen are trying to hit but are not finding gaps. Just six runs come in the 13th over. Karun hits a straight drive for four. Nair follows it up with an inside-out shot for four. The ball is a no-ball and he hits another four in the free hit delivery. He then gets out trying an aerial shot down the ground. Harshdeep Brar comes to the middle and hits his first ball for a four on the off side. Naveen bowls a bouncer to Bhavane. Brar gets out opting for a lofted shot. Bhareth NP comes to bat. Four singles taken and a catch dropped in the 16th over. OUT! Brar c K Arjun b Gneshwar Naveen 4(2) OUT! Karun Nair c Suchith b Shantharaju 51 (67)

Live Cricket Score Mangalore United 90/1 | Overs 12: Ninth and Tenth overs are tight and fetch only 10 runs. After ten overs things are looking better for Mysuru Warriors. Naveen is bowling pretty well, he gives just four runs in the eleventh over of the innings. Naveen’s strength is his line and length. Sahantharaju is asked to bowl the 12th over. Karun Nair is dealing with singles. Bhavane plays a cheeky sweep for four. The match is in balance for both the teams. Karun reaches his 50 on 43 balls. Batting: Shishir Bhavane 9 (9), Karun Nair 51 (44)

Live Cricket Score Mangalore United 67/1 | Overs 8: After six overs Mangalore United are 50/0. Both Kadam and Nair are middling the ball pretty well. Kadam tires a lofted shot and is caught in the seventh over inside the cirle. Shishir Bhavane comes to bat. Karun Nair times a ball in the gully area for four. He looks in a no-nonsense mood having hit five fours. Bhavane come to party and pulls a ball for four. OUT! Kadam c K Gautam b Gneshwar Naveen 25(19)

Toss: Mysuru Warriors have won the toss and have elected to bowl first. 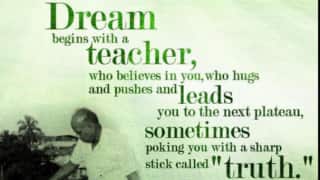 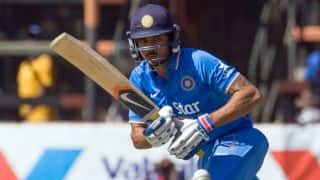