Hello and welcome to CricketCountry’s coverage of the match 13 of Karnataka Premier League (KPL) 2015 between Bijapur Bulls and Namma Shivamogga. Under Stuart Binny, Namma Shivamogga have been on a roll so far this tournament, having won each of their matches so far. Sadiq Kirmani, son of former Indian cricketer Syed Kirmani, has been excellent for Shivmogga, while Shreyas Gopal has been and Abrar Kazi are experienced as well. For the Bulls, skipper Balachandra Akhil, Robin Uthappa, KP Apanna, Raju Bhatkal, Abhimanyu Mithun, and KC Cariappa make the team one of the favourites of the tournament. Will Shivmogga suffer their first defeat, or will they prevail over the Bulls? Catch all the updates of the match here. Bijapur Bulls vs Namma Shivamogga, Free Live Cricket Streaming Online on Sony Six

Bijapur Bulls defeated KPL 2015 table toppers by seven wickets at HUbali ground on Wednesday, with Ravikumar Samarth being their top-scorer for his 60-ball 78.

Live Cricket Score Bijapur Bulls 51/0 | Overs 5: The Bulls needed five overs to get to their first fifty. Ravikumar Samarth and Raju Bhatkal are batting on 30 and 20 repsectively, meaning Shivamogga have given just one single so far.

Live Cricket Score Bijapur Bulls 22/0 | Overs 2: Chasing Shivamogga’s target of 162, Rajoo and Samarth have given the Bulls excellent start with the run rate being almost 11, while the required rate is below eight.

Namma Shivamogga set target of 162 for the Bijapur Bulls, who have the likes of international players Uthappa and Abhimanyu Mithun.

Live Cricket Score Namma Shivamogga 79/1 | Overs 10.2: Sadiq Kirmani hits a second consecutive half-century in the ongoing KPL 2015, giving his side a great start. Kirmani, who is the second leading run-scorer at present, has been taking on the bowlers on regular intervals and has already hit 4 sixes and fours.

TOSS: Namma Shivamogga won the toss and elected to bat. 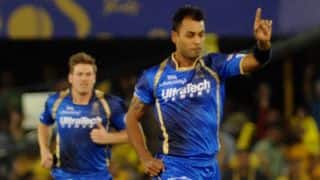 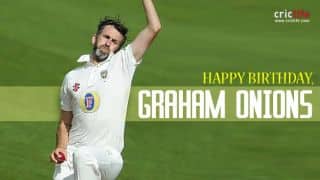