Hello and welcome to CricketCountry’s live coverage of Day 2 of the Group A game of the 2015-16 Ranji Trophy between Karnataka and Haryana, live from Mysore. Day Two will start with Haryana on 319 for 8, but that will hardly reflect the spectacular drama that unfolded on Day One as play proceeded after Virender Sehwag opted to bat. Sehwag, a day after his 37th birthday, was playing his first match after retirement, slammed a hundred, as did Jayant Yadav; and just when it seemed Haryana would run away with the match, HS Sharath took the first hat-trick of Ranji Trophy 2015-16 to bring the title holders back into the match.

Live cricket scores Karnataka 9/1 | Overs 3 | Batting: K L Rahul 4(9), Samarth R 0(5): Karnataka bowled out Haryana for a total of 331 after the latter ended Day 1 on 319 for 8. Harshal Patel and Sanjay Budhwar were the two batsmen dismissed in the early hours of Day 2 before the defending champions took over their innings. The hosts did not have a great start as Haryana’s Ashish Hooda struck on the first delivery of the second over to remove Karnataka’s opener Robin Uthappa cheaply for a four-ball five, leaving them at 7 for 1.

Vinay Kumar’s first spell went wicketless, but Sharath and David Mathias reduced Haryana to 53 for 2 when Yadav joined Sehwag. The pair added 206 at a whopping run rate of 4.26, and there was nothing Vinay Kumar could do to put a halt on Sehwag (136 in 170 balls, 16 fours, 3 sixes). The great man eventually holed out to Manish Pandey off Mathias, his 136 coming out of 231 during his stay at the crease. Yadav followed soon off the left-arm spin of Jagadeesh Suchith, and from 259 for 2 Haryana collapsed to 313 for 8, Sharath causing the damage with 4 for 47.

Sharath also took the first hat-trick of the season, having Sachin Rana LBW, Rahul Dagar caught-behind and Nitin Saini LBW off consecutive deliveries. Himanshu Rana (33 in 55 balls, 4 fours) was the only one to put up a fight before he was eighth out. 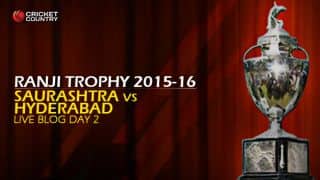