RCB now need to win their next two games to get through to the playoffs. Read the match report here.

Anureet is in to bowl the last over. He bowls a no-ball first ball, a high full-toss. Sarfaraz then tries to scoop but misses. He tries to scoop again and gets a single. Wiese then misses. That should be it! Sixes too will not get them there. Wiese gets a single. Sarfaraz is gone as he gets an edge to third-man. KXIP have won by 22 runs.

De Villiers takes a single first ball off Akshar. Mandeep is on and he reverse sweeps one for a four. They get a leg-bye off the next ball. De Villiers is gone! He tries to sweep and has holed out to short square-leg.

Sandeep is brought back and he starts off with a wide. De Villiers tries to loft a widish delivery but gets only a single through the deep. Gayle then gets a single down the ground. De Villiers follows it up with a single. Sandeep comes around the wicket and it is a wide down the leg-side to Gayle. He is gone now! Gayle tries to pull across the line and edges to the wicketkeeper. Mandeep is in and he smashes the first ball he faces through cover for a four. he follows that up with a single

Gayle gets a leg-bye first ball as Anureet Singh is in to bowl. Kohli then smashes it over mid-on and that has gone for a four. Kohli then drives through cover and gets a couple. Anureet goes full and Kohli has smashed it into the stands at long-on. Kohli makes room and lofts through cover for a four. And Kohli is gone! He drags it back onto his stumps.

Beuran Hendricks is the new bowler. The first ball shapes outside the off-stump. Kohli pokes and misses. Kohli then smashes the next ball straight to mid-on. Another dot ball! Kohli gets off the mark with a single through mid-wicket. Gayle then hits one through square-leg and gets a couple for that. Gayle then gets a single. ohli smashes it over mid-off, but only gets two.

Gayle and Kohli are out in the middle. Sandeep Sharma comes on to bowl and he moves it away from Gayle outside the off-stump. Gayle then hits it to mid-on but no run is taken. Gayle then makes room and smashes it over long-off. That has gone for a six. Gayle then tries to go over leg-side but it hits his pads. He then smashes it through square-leg. That fetches him four. There is an appeal as Sandeep almost yorkes Gayle, but all three stumps were visible. In fact they have referred to the third-umpire. Did Gayle get the edge on the pads and it lobbed to slip? No! The replay shows the ball took the underedge then hit the ground before lobbing off his pads.

Starc is back for the last over. Gurkeerat gets a single first ball. Akshar drive and he too gets a single. Gurkeerat goes. He edges to the wicketkeeper, trying to make room and hit it over the off-side. Dhawan is the new batsman and he gets an edge to third-man for a single. Akshar then edges it to fine-leg and they get a couple. Akshar tries to go over leg-side but only a single possible.

Chahal is back. Askhar lofts over long-on and gets six. Kohli was running across, but it was away from him. Akshar comes down the track and it hits his pad. They get a leg-bye. Bailey charges but Chahal follows him and they get a single. Akshar lofts down the ground but gets only a single. Bailey is gone as he tries to scoop but misses. The hundred is up.

Chahal is brought into the attack. Miller smashes it down the ground. Where has that gone! It has gone into the big stand. That was hit really long. The broadcasters say it is 98 metres. Miller has then hit the next one very high, miles in the air. Kohli settled under it. He tries to catch it before the boundary, but tips it over. It was a tough chance. Miller then gets a single. Bailey gets a single. Miller is gone! He charges down and it is wide. He is left stranded and stumped.

Maxwell makes room and gets a single. Harshal Patel is the bowler. Vohra then tries to go over long-off again but has holed out to Mandeep Singh in the deep. Maxwell then shapes to pull and smashes it in front of square for a four. What a shot! Maxwell is in position again and he has smashed it well over square-leg. It is going for six is it! No, AB de Villiers has taken it at the edge. Two new batsmen in the middle. Bailey gets off the mark first ball. Miller also gets off the mark with a single.

Aravind is back and Maxwell tries to work it around, misses. he then guides it fine for a single. Vohra then gets six! He charges down, makes room and lofts it high over long-off for a six. Vohra follows it up with a single. Maxwell then pulls to the leg-side and gets two for that. He ends the over with a single

Saha is gone! He tries to go over the top to David Wiese, but has hit it high in the air. Mandeep Singh settles underneath and gets it. A couple of balls later, Vohra goes over mid-off, but gets three as the ball stops on the outfield. It is still heavy after all the rain. Glenn Maxwell is back. He tries to reverse-hit off the second ball he faces but misses it.

Wriddhiman Saha is going really well here. He hits a boundary off the first ball, and then edges one behind for another four! Sreenath Aravindbeats the bat off the next ball. Saha spanks the nex one down the ground for six! AND ANOTHER FOUR! Saha smacks it at Aravind, who drops it . The ball then goes for four more! Aravind is in pain and is attended to by the physio. He then bowls a wide down the leg-side. There was a noise as it went past Saha, but it is given a wide. Saha gets a single to end the over.

Wriddhiman Saha is opening the batting with Manan Vohra. Mitchell Starc has the ball in hand. Saha guides the first ball past point and gets a couple. The next ball is a wide down the leg-side. Saha gets a single later. Vohra gets off the mark first ball by dabbing it through the off-side first ball. Saha gets a four as he gets a full toss on the pads, he guides it fine. The next ball he lofts over the leg-side and it has gone for a four.

Here are the two teams for the day:

Toss: RCB have won the toss and will bowl first. RCB are unchanged and KXIP have brought in Rishi Dhawan for Murali Vijay.

There is a wet patch on the field. The groundstaff are working hard to get it ready. The next inspection is at 22:25 IST.

The umpires are out in the middle, assessing the conditions, as the teams are training. The next inspection will be at 22:05 IST.

Good news: The rain has relented and the covers are coming off. We should have a word on the game soon.

We are getting pictures again and it is still raining. So, our wait has prolonged.

We are getting pictures from the ground. The drizzle seems to have eased. The RCB players are out there warming up.

Toss has been delayed because of some showers.

Hello and welcome to CricketCountry’s coverage of the Indian Premier League (IPL) 2015 match between Kings XI Punjab (KXIP) and the Royal Challengers Bangalore (RCB) at Mohali. KXIP have been knocked out of the IPL 2015 and are playing for pride. RCB remain in contention for a spot in the playoffs and a string of victories has given them tremendous confidence as they head into the business end of the tournament. This match will be played at the IS Bindra PCA Stadium, Mohali, which is KXIP’s home ground. READ: Kings XI Punjab vs Royal Challengers Bangalore, IPL 2015 Preview

RCB have been bolstered by AB de Villiers‘ amazing knock in the last game. With Chris Gayle, Virat Kohli and de Villiers at the top, they are truly a force to reckon with in this tournament. They took their time to get into winning ways but they then went on to pick a few victories to regain confidence. At the time time, KXIP have failed to find a formula that fits well and provides consistency. All they can do is finish the season well and then build for next year. 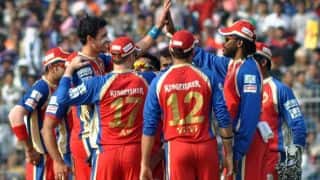