Mumbai were looking shaky, having lost early wickets, after dismissing MP for 240 in the first innings.

Hello and welcome to CricketCountry’s live coverage of the second day of the ongoing Ranji Trophy 2015-16 Group B match between Madhya Pradesh and Mumbai at Indore in the eighth round of the tournament. As many as 16 wickets fell on the opening day with Mumbai finding themselves in a spot of bother at 74 for six in their first innings in reply to Madhya Pradesh’s 240. Opting to bat after wining the toss, Madhya Pradesh did not have the best of outing as only Harpreet Singh (59) made a significant score before the hosts were bowled out for 240 in 75.1 overs. Off-spinner Ankush Jaiswal sparkled on his first-class debut picking up four wickets for 63 runs, while pacer Shardul Thakur (2 for 42) and left-arm spinner Vishal Dabholkar (2 for 59) scalped two wickets apiece. Complete coverage of Ranji Trophy 2015-16

LIVE CRICKET SCORE: MP 201, BATTING: Mihir Hirwani 3 (7) — GONE!!!! MP have been shot out for 201, with Jalaj Saxena being the top scorer with 79 runs, while Shardul and Iqbal Abdullah claiming three wickets each.

LIVE CRICKET SCORE: Mumbai 109/7, BATTING: MUB Sriram 10 (28), Bodavarapu Sudhakar 0 (3) — Seven wickets are down for Mumbai as they stare at the innings bowl out, while Ankit Sharma and Jalaj Saxena have claimed four and three wickets each.

In reply, Mumbai dished out a terrible display with the bat to be reduced to 74 for six in just 21 overs at stumps on the opening day. Openers Jay Bista (27) and Akhil Herwadkar (17) got starts before being dismissed. At the close of play, Nikhil Patil was unbeatn on 10 along side Iqbal Abdulla, who is yet to open his account. Jalaj Saxena (3 for 32) and Ankit Sharma (3 for 39) picked up three wickets each for Madhya Pradesh.

Mumbai are currently Group B toppers with 26 points, being one of the two undefeated teams in the tournament so far. Madhya Pradesh are trailing them at the third spot with 17 points. 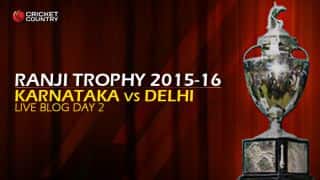 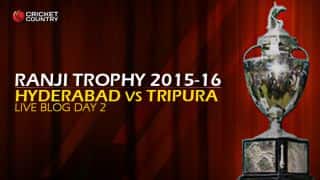